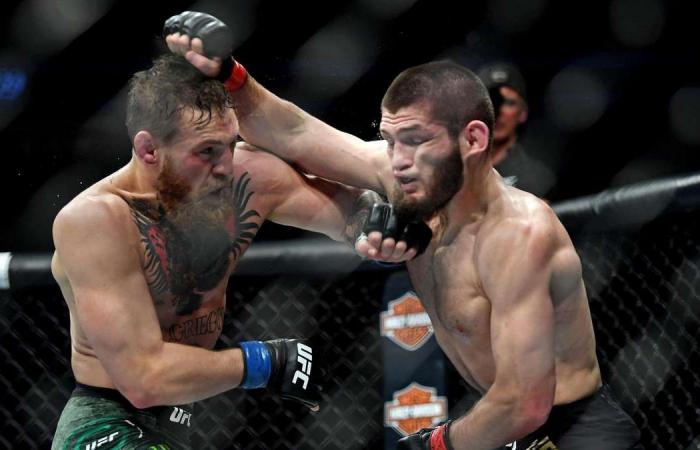 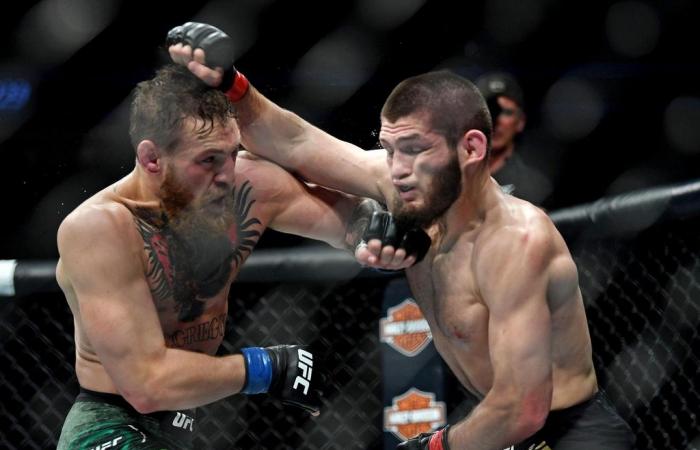 Hind Al Soulia - Riyadh - Khabib Nurmagomedov has hit back at Conor McGregor following the controversial Irishman’s Twitter tirade in which he took aim at the entire lightweight division.

McGregor eventually homed in on Nurmagomedov, whom he lost to in an ill-tempered clash in October 2018, again ridiculing the Dagestan native for withdrawing from last month’s original fight with Ferguson.

It did not take long for Nurmagomedov to respond, though, posting on Twitter a picture from their 2018 fight showing McGregor moments before he submitted in the fourth round, with the accompanying caption: “Yes, we remember you, you were so nice that night. Be same, don’t be fake.”

Another post quickly followed, picking up on McGregor denigrating Nurmagomedov’s famed wrestling, in which the champion said: “Hug legs? Have you forgot how I knock you down, or you typing tweets drunk?

“Beat you in striking, parts [sic] you up in wrestling, absolutely destroy you in grappling, made you grab air with your hands, and at the end you gave up. Last one, don’t forget your words ‘It’s only business’.”

McGregor did not spare any of his lightweight rivals, though, singling out Gaethje as his most likely next opponent. The American, 31, was hugely dominant in his career-victory against Ferguson on Sunday in Jacksonville, Florida, winning by TKO in the fifth round.

Gaethje is expected to now face Nurmagomedov in a unification bout later this year, not that McGregor agrees.

“It’s me and Justin next as Khabib is the biggest bottle fighter in the game,” said the former two-division champion, who last fought in January. “Guarantee it.”

McGregor later added that he would “butcher” Gaethje in an expletive-laden post.

As for Ferguson and Poirier, McGregor lambasted his former fellow Paradigm Sports Management client for his display against Gaethje, saying: “I love Tony. We represented him amazingly at Paradigm Sports and were betrayed for a promise of a baseball contract. But frame and preparation here was just embarrassing. His methods and conversation are humorous/enjoyable but he was never the level perceived. Although tough.”

McGregor added: “It is Dustin/Tony next when Tony heals. If he does. Dustin will beat him also if changes are not made. Which they won’t. Dustin, although game, and in the mix, will be fed to the floor again. Couple wins here/there then folded in half. Rinse and repeat - Dustin career.”

Poirier, who hasn’t fought competitively since losing to Nurmagomedov at UFC 242 in Abu Dhabi last September, replied: “You have one win at lightweight in the UFC… pipe down”.

These were the details of the news Khabib Nurmagomedov hits back after Conor McGregor attacks UFC lightweight rivals for this day. We hope that we have succeeded by giving you the full details and information. To follow all our news, you can subscribe to the alerts system or to one of our different systems to provide you with all that is new.