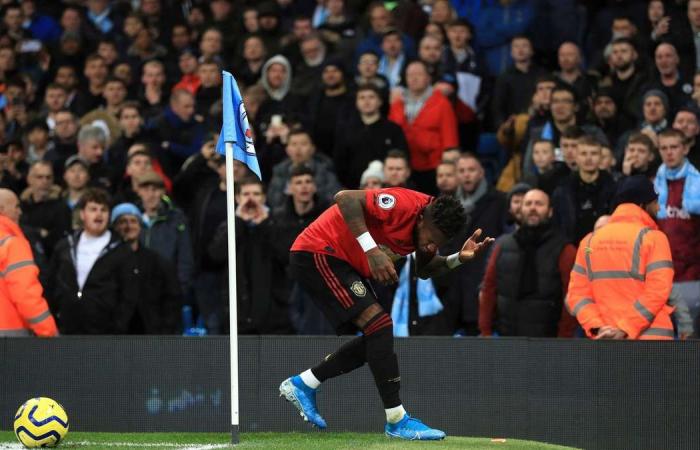 Hind Al Soulia - Riyadh - The Manchester City fan who was arrested on Sunday over claims he made monkey gestures at a Manchester United player has denied the allegations, saying he is not a racist.

Police arrested the man suspicion of a racially aggravated public order offence and kept him in custody for questioning but did not reveal his identity.

Reports have since revealed the identity of Anthony Burke, 41, after video footage emerged of him in the crowd making gestures at Saturday’s derby at City’s Etihad stadium.

The alleged gestures appeared to be targeted at United’s Brazilian midfielder Fred, when he was taking a corner, with Jesse Lingard standing near by. Fred was also injured when a missile hit him in the neck when he was taking the set piece.

Mr Burke said pausing the video footage at that particular moment made him look like he was making a gesture when he was not and he urged the public to watch the full video.

“Listen, I’m only racist [expletive] because I had a screen shot that made me look it," he wrote on Facebook.

"However, I ain’t racist. Watch the match. Half of it was me putting my hands in my pants.”

He has since deleted the posts on the social media site.

Mr Burke’s employer, construction company Kier Group, on Saturday said that it was aware of the videos on social media and that it took “allegations and instances of racism very seriously.”

City pledged to take a zero-tolerance approach to supporters found to have subjected United players to racist abuse after the Premier League champions lost 2-1 to their local rivals on Saturday.

Several in the derby said they were subjected to racist abuse from City fans and had objects thrown at them.

“Unfortunately, we are still in a backward society," Fred told ESPN Brasil. "We still have to live with that in 2019.

"On the field, I didn’t see anything. I saw it only in the locker room afterwards. The guys showed me. He even threw a lighter and it hit me. I try not to care about that. I try to look ahead.

“Unfortunately, this is happening in some stadiums. It happened here, it happened in Ukraine with some friends.

"It’s sad but we have to keep our heads up and forget about that. We can’t give them any attention because that’s all they want.”

The Football Association will launch an investigation into the incident and other reports of racism from the derby.

The Premier League said over the weekend that it would not tolerate racial discrimination in any form and that it was not welcome at football matches.

These were the details of the news Arrested Man City fan denies making racist gestures in video for this day. We hope that we have succeeded by giving you the full details and information. To follow all our news, you can subscribe to the alerts system or to one of our different systems to provide you with all that is new.