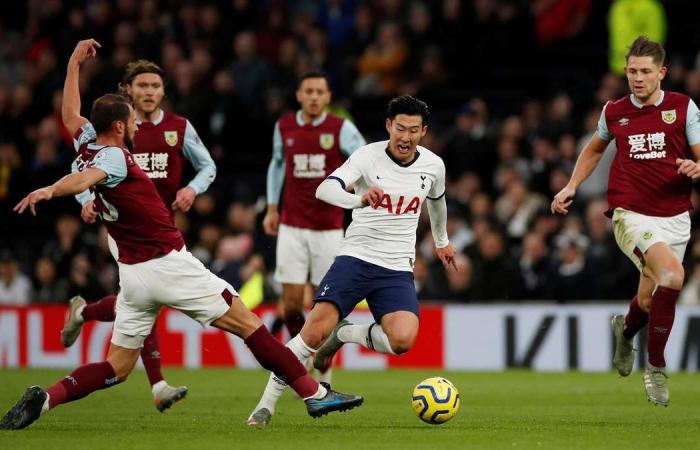 Hind Al Soulia - Riyadh - Tottenham Hotspur captain Harry Kane said teammate Son Heung-min "stole the show" in the 5-0 mauling of Burnley with the South Korean scoring one of the goals of the season.

Kane helped himself to a goal in either half while Lucas Moura and Moussa Sissoko also took advantage of some poor defending by the visitors, who rarely troubled home goalkeeper Paulo Gazzaniga on an embarrassing trip to North London.

While Sean Dyche's side's defending contributed to their own downfall, the day belonged to Son and his superb solo effort.

The Spurs forward set off on an 80 metre run from the edge of his own box and slalomed through half the Burnley defence to side foot past Nick Pope on 32 minutes.

"All he wants to do is work hard. He has great quality and works hard for the team. All round it was a top performance."

It was a fifth league goal of the campaign for the South Korean speedster, and one neither he or anybody else is likely to forget in a hurry.

"When I got the ball I tried to pass it to Dele [Alli], but I couldn't find him so I just kept going. I am happy to score this goal," Son told Sky Sports.

It was a third straight Premier League defeat for the visitors while and a first clean sheet in five games for Spurs under Jose Mourinho to move back up to fifth in the standings on 23 points.

Liverpool made seven changes but still romped to a 3-0 win at Bournemouth after goals from Alex Oxlade-Chamberlain, Naby Keita and Mohamed Salah extended their Premier League lead to 11 points over Leicester City, who play on Sunday.

The visitors, who kept a clean sheet for the first time in 14 games, could even afford to rest Sadio Mane against a side whose fifth successive defeat left them one point above the relegation zone.

While manager Jurgen Klopp was happy with his side's performance, it was the shutout that gave him most satisfaction.

"It is not about being constantly exciting it is about doing the right stuff. There were not a lot of difficult moments to defend and that is good, important. Nearly a perfect day," Klopp told Match Of The Day.

"The most used word in the dressing room at the moment is clean sheet - finally!"

The home cause was not helped by an injury to Nathan Ake, who limped of with a hamstring strain a minute before Liverpool took the lead.

As so often this season, a goal came from a Liverpool crossfield pass, with Jordan Henderson hitting a superb ball from inside his own half for Oxlade-Chamberlain to get a first-time volley past the advancing keeper.

Liverpool suffered their own injury blow before hal ftime when Dejan Lovren hobbled off with a leg strain. But there was no stopping the visitors and Keita started and finished the move for their second goal after a clever backheel from Salah.

Keita returned the favour to set up Salah with a simple finish after the break as Liverpool disappeared out of sight.

Struggling Watford snapped a string of three straight defeats with a 0-0 draw against Crystal Palace in a scrappy clash at Vicarage Road.

Watford caretaker Hayden Mullins' final game in charge only highlighted the overall improvement required at the bottom club as new boss Nigel Pearson prepares them for a trip to leaders Liverpool next Saturday before Manchester United come calling.

These were the details of the news Son Heung-min stunner 'steals the show' as Spurs hammer Burnley and Liverpool beat Burnley for this day. We hope that we have succeeded by giving you the full details and information. To follow all our news, you can subscribe to the alerts system or to one of our different systems to provide you with all that is new.