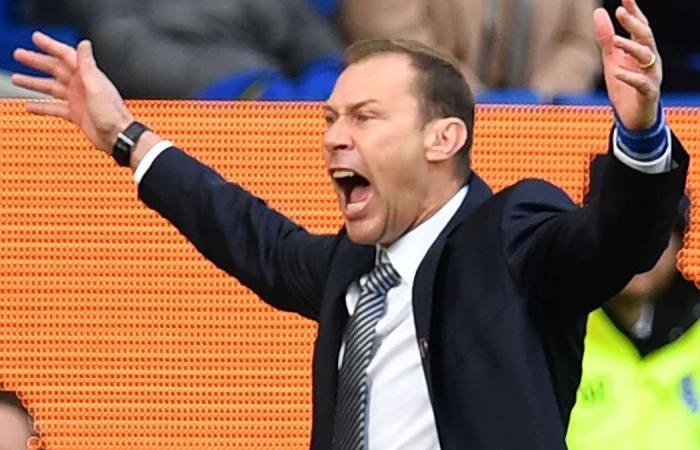 Thank you for your reading and interest in the news 'Bleed for the club': Duncan Ferguson template sees hard-working Everton beat Chelsea and now with details

Hind Al Soulia - Riyadh - As Frank Lampard can testify, a talismanic former player can be a galvanising force at a manager of a club with an identity crisis. Now he knows it to his cost, too.

As the final whistle blew, the tannoy broadcast a customised version of Go West. The chorus – “Duncan, Duncan Ferguson,” – summed up the sentiments. The same name had adorned the programme cover. It had been sung by supporters. The charismatic caretaker manager turned conquering hero marked victory by raising a huge fist before striding around the pitch, arms upraised, accepting the acclaim.

Rather than showing any of the goals, the big screen showed Ferguson sprinting 30 yards along the touchline in celebration of Dominic Calvert-Lewin’s second; further, it felt, that he ran during any of his latter Everton appearances. “I need to get my fitness up,” he smiled.

The way he had marked Everton’s first two goals was memorable enough, firstly by leaping into the air while pumping it with a clenched fist and then by picking up a ballboy and swinging him around. “I would have hugged the linesman as well if he was there,” Ferguson grinned.

If the sacked Marco Silva kept his emotions under wraps too much for Evertonians’ liking, the same could not be said of his temporary successor. “I was kissing everybody,” Ferguson reflected. “I think the fans want managers to be passionate.” Goodison Park rallied around a cult hero and he roused them, crowd and team feeding off each other in the way they can do when Everton acquired a momentum that feels unstoppable. By defeating Chelsea and taking Everton out of the bottom three, Ferguson shaped a day that was simultaneously rousing and nostalgic.

“I have never felt anything like it in my life,” he said. “It was an unbelievable experience, one I will never forget. What a fantastic result.”

The presence of the former Bayern Munich manager Niko Kovac in the directors’ box was a reminder that Everton have their sights set on more established managers than Ferguson. “We want the best managers in the world managing our football club,” the Scot said. But an antidote to insipid defeats was an eloquent advertisement for his transformative powers.

He has an Everton tattoo on his bicep and his children have season tickets in the Gwladys Street End. The broader question is if an emotional commitment is enough. In the short term, he was just what Everton required. He gave Everton and old-fashioned reboot, jettisoning the sacked Silva’s 5-4-1 formation and bringing back an old-fashioned 4-4-2 plucked straight from his own playing days. There was nothing sophisticated about Everton, getting the ball forward at every opportunity, having just 30 per cent of possession, but hassling and harrying Chelsea into errors with their aerial attack. It was mayhem, Ferguson-style.

He used Richarlison as a striker and the Brazilian got the kind of goal Ferguson copyrighted. It came in the fifth minute: this was an instant impact. Richarlison met Djibril Sidibe’s right-wing cross with an emphatic header to complete a long-range one-two. He played like a man possessed. He was cautioned for chopping down Mateo Kovacic, but it was a sign of the conspicuous commitment the crowd liked. Everton made 37 tackles, the most they had put in one match for a decade. “What a shift they put in,” Ferguson said. “To a man, they were a colossus. It is a template: hard work, pride, passion, bleed for the club.”

Calvert-Lewin, the sort of physical, industrious striker Ferguson would like to have partnered, flourished under a mentor. “I love Dominic,” said Ferguson. He showed why with two goals, both the product of Chelsea errors.

The former Everton defender Kurt Zouma miscued a clearance, Calvert-Lewin was too strong for Andreas Christensen and the ball bounced off Zouma for the forward to finish smoothly after the scruffiest of moves. Then, after Kepa Arrizabalaga passed straight to the relentless Theo Walcott, Calvert-Lewin backheeled the ball to Tom Davies, Chelsea failed to clear and the forward poked it in.

“We gave them three goals,” Lampard admitted. “We can’t defend like that. They were direct and we had to deal with that and we didn’t deal with it well enough.” The third, in particular, he deemed “a ridiculous goal.”

Chelsea were luckless in the timing of the fixture. “It was definitely an extra dangerous time to play against Everton,” Lampard reflected. “They got an extra bounce.” His side got a boost from Kovacic’s classy strike, only for Calvert-Lewin to finish them off.

These were the details of the news 'Bleed for the club': Duncan Ferguson template sees hard-working Everton beat Chelsea for this day. We hope that we have succeeded by giving you the full details and information. To follow all our news, you can subscribe to the alerts system or to one of our different systems to provide you with all that is new.