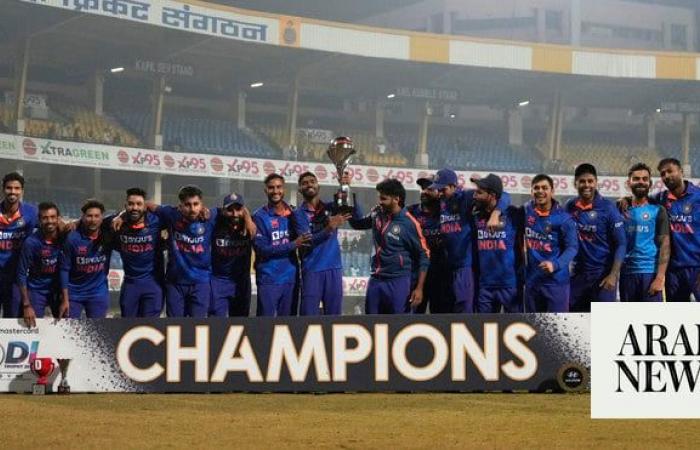 The Black Caps lost the three-match series 3-0. India won the first ODI in Hyderabad by 16 runs and the second ODI in Raipur by eight wickets.

Put in to bat, the Indian openers shared an impressive stand of 212 runs in 26.1 overs.

It was the highest first-wicket partnership in ODIs against New Zealand, exceeding 201 runs by Virender Sehwag and Gautam Gambhir for India in 2009.

At the other end, Gill scored a third ODI hundred in four innings. He hit 13 fours and five sixes to reach the landmark off 72 balls.

Overall, Gill scored 360 runs in three innings against New Zealand. It was the joint-highest for any batsman in a bilateral three-match ODI series along with Pakistan’s Babar Azam against West Indies in 2016.

India then lost both openers in 12 deliveries, and continued losing wickets at regular intervals. From 230-2 in 28 overs, its last seven wickets added only 155 runs in 22 overs.

Hardik Pandya held anchor with a 38-ball 54 after Virat Kohli (36), Ishan Kishan (17) and Suryakumar Yadav (14) were out cheaply on a batting-friendly pitch.

But Conway held his end to propel New Zealand’s innings. He scored 50 off 41 balls, and then accelerated to 100 off 71 balls, including seven fours and seven sixes.

Conway’s 138 was New Zealand’s third-highest ODI score against India. Overall, he hit 12 fours and eight sixes. Henry Nicholls scored 42 off 40 balls to put on 106 runs for the second wicket.

Thakur struck a double blow in the 26th over to remove Daryl Mitchell (24) and Tom Latham (0) off successive deliveries. He also dismissed Glenn Phillips for 5 to break New Zealand’s resolve.

Contributions from Mitchell Santner (34) and Michael Bracewell (26) were not enough to trouble India’s score.

These were the details of the news Dominant India complete 3-0 sweep against New Zealand for this day. We hope that we have succeeded by giving you the full details and information. To follow all our news, you can subscribe to the alerts system or to one of our different systems to provide you with all that is new.