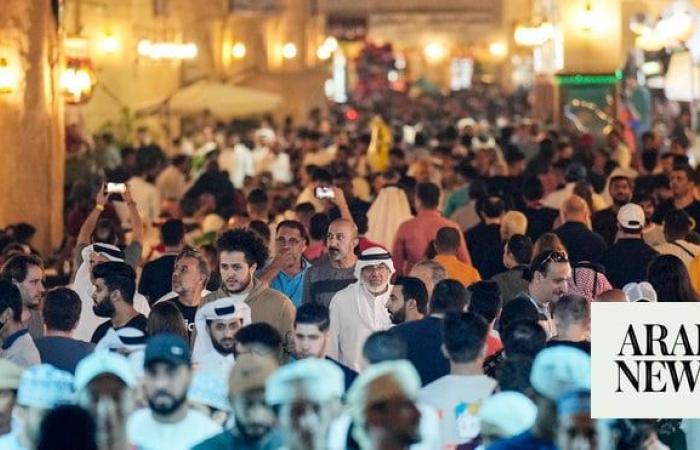 Thank you for reading the news about 765K World Cup visitors fall short of Qatar’s expected 1.2 million influx and now with the details

Jeddah - Yasmine El Tohamy - DOHA: Merely a glance at their iconic orange or blue and white striped shirts is enough to evoke memories of World Cups past and more history will surely be written on Friday when the Netherlands face Argentina in their quarterfinal.

Argentina have the pride that comes from being two-times world champions while the Netherlands carry the baggage of being three-times beaten finalists.

The game is far from being a nostalgia-fest, however, pitting one of the greatest forward of all time against one of the finest defenders of the modern era, with Lionel Messi trying to unpick a defense marshalled by Liverpool’s Virgil van Dijk.

The game also pits the youngest manager in the tournament against the oldest.

Argentina’s 44-year-old coach Lionel Scaloni, in his first major tournament, will have to out-think the wily 71-year-old Louis van Gaal, whose resume includes league titles with Barcelona and Bayern Munich as well as a Champions League victory with Ajax.

The South Americans came into the tournament, as always, with high hopes in their homeland of a victory to match those celebrated in 1978 and 1986, while the Dutch had more tempered expectations given their failure to qualify four years ago.

It has been smooth progress in Qatar for the Dutch though, who topped their group and then beat the US in the last 16 with some comfort and style, looking solid at the back and — despite critics labelling them dull — — increasingly effective in their attacking play.

With Memphis Depay’s fitness gradually improving and Cody Gakpo having enjoyed a good tournament, the Dutch have a punch to their attack that many feared would be missing.

Argentina began the tournament with a shock loss to Saudi Arabia, one of the biggest upsets in World Cup history, but recovered to finish first in the group. Messi then turned on the style as they overcame Australia to book their place in the last eight.

Van Gaal unsurprisingly sees Messi’s creativity as a serious threat but he raised some eyebrows when he also hinted at the seven-time Ballon d’Or winner’s lack of defensive work-rate.

“Messi is the most dangerous creative player, he is able to create a lot and to score goals himself. But when they lose the ball he doesn’t participate much, this gives us chances,” he said.

Surprisingly, given their pedigree, Argentina have never beaten the Netherlands inside 90 minutes in their nine meetings in World Cup and friendly encounters.

But it is their victory on penalties in Sao Paulo in the semifinal in 2014 that lingers in the mind for Van Gaal, who was in charge of the Netherlands at the time.

Van Gaal noted that while Messi was neutralized by the Netherlands in that game it counted for little given that the Argentines advanced after a shootout to end the Dutch dream of finally celebrating a World Cup title.

A fonder memory for Dutch fans is of the 1998 World Cup where Dennis Bergkamp secured a place in the last eight with a wonderful last-minute finish in a 2-1 victory.

Bergkamp is one of many superb talents that the Netherlands has produced since they made the world take notice of them in the 1970s with a team inspired by the brilliant Johan Cruyff.

Widely considered to be one of the best teams never to win the World Cup, the Dutch finished runners-up in 1974 and 1978 — in the latter final losing 3-1 to hosts Argentina.

Top technical skills and clever tactics have been part of the Dutch game ever since but World Cup success has evaded them, with only the 1988 European Championship title offering some consolation.

There is no player of the level of Bergkamp, Cruyff or Marco van Basten in this current version of the team in orange, with perhaps only the towering center-half Van Dijk meriting comparison in terms of class.

But the Argentines, who know their football history and their struggles with the Netherlands, expect to face a well-drilled team which so far in this tournament has not looked in much trouble.

“It’s not as brilliant as previous Dutch teams, but they are very clear on what they do,” said Scaloni. “This is going to be a great match between two historic teams.”

These were the details of the news 765K World Cup visitors fall short of Qatar’s expected 1.2 million influx for this day. We hope that we have succeeded by giving you the full details and information. To follow all our news, you can subscribe to the alerts system or to one of our different systems to provide you with all that is new.