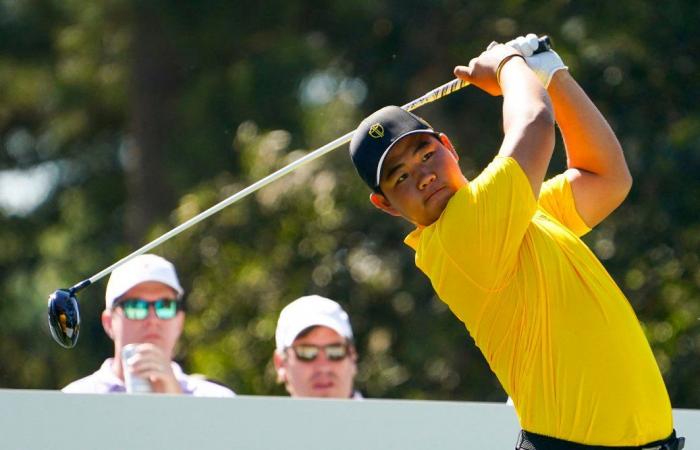 Jeddah - Yasmine El Tohamy - CHARLOTTE: On the 12th hole at Quail Hollow on Wednesday during his final practice round for the Presidents Cup, 20-year-old South Korean star Kim Joo-hyung botched a math calculation.

“Dude, I didn’t even graduate from high school,” Kim said.

The world No. 22 and youngest player on the global squad has been a joker to keep the locker room lighthearted as the Internationals prepare to face the US, who lead the rivalry 11-1-1 after eight consecutive triumphs.

Kim, nicknamed Tom for his youthful love of Thomas the Tank Engine, is the Seoul-born son of a teaching professional who grew up in Australia, the Philippines and Thailand and turned pro in May 2018 at age 15.

He finished third in last year’s Scottish Open, earned PGA playing rights for this past season and won his first PGA title last month in nearby Greensboro.

“Tom could be our little secret weapon,” said teammate Adam Scott. “He’s a confident young kid. He has won on the PGA Tour and this is the next challenge in his career. He’s obviously good enough to do it on the big stage. This is his first real opportunity.”

Kim, one of a record four South Koreans on the squad, accepts his role as a motivator with aplomb.

“I’m the youngest guy on the team and I’m a big jokester, so playing that role, I feel like I can bring good energy and enlightenment to the team,” he said. “When things get tough, I feel I can bring people up. That’s going to be my role.”

Compatriot Im Sung-jae, who delivered 3.5 points for the Internationals in 2019, is fine with the “baby” antics.

“He has got a great sense of humor, brings a lot of positive energy and obviously he’s the youngest player, so he’s kind of the baby,” Im said. “Brings a lot of humor to keep the energy very lighthearted.”

Kim has found a new audience for his humor.

“I just like to joke around a lot. I’m lucky enough that they don’t give me (abuse) for it,” he said. “It’s a great vibe, definitely enjoyable in the team room.”

That could carry over to the course if he is matched against US pal Scottie Scheffler, the top-ranked Masters champion.

“I don’t think I’ll be able to trash talk to Jordan Spieth. I’m not that close enough,” Kim said. “But I think Scottie, he gives me a really hard time. It would be fun if I could play with him. We’d probably give each other a hard time.”

That, Scott said, could be a key link in uniting players from all over the world.

“He’s going to help bring our team together even more,” Scott said. “It really helps integrate our team.”

“To just come in here with an energy like this is the biggest moment of his life, it kind of brings everyone else into that frame of mind,” said Australian Cam Davis.

These were the details of the news Tom Kim the Presidents Cup ‘secret weapon’ for Internationals for this day. We hope that we have succeeded by giving you the full details and information. To follow all our news, you can subscribe to the alerts system or to one of our different systems to provide you with all that is new.