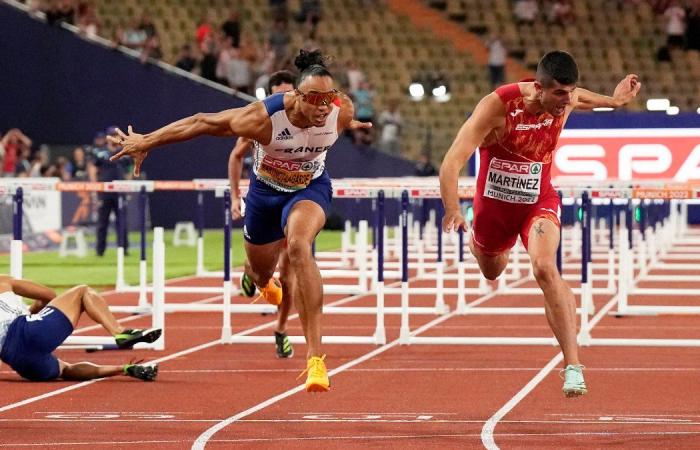 Thank you for reading the news about Olympic champ Pichardo wins Euro triple jump, Bol keeps double bid on track and now with the details

Jeddah - Yasmine El Tohamy - JEDDAH: The increasing anticipation ahead of this weekend’s blockbuster World Heavyweight Championship rematch between Oleksandr Usyk and Anthony Joshua scaled new heights in Jeddah, Saudi Arabia on Wednesday evening. The traditional fight week press conference culminated with the ‘Rage on the Red Sea’ headliners facing off for the world’s media and VIPs in attendance.

With only three days to go before the reigning unified world heavyweight champion Usyk battles former two-time champion Joshua for the second time, the fighters and their teams topped the bill as a capacity crowd inside the coastal city’s Shangri-La Hotel and millions more tuning in from around the globe watched on.

Matchroom Sport Chairman Eddie Hearn, who led the press conference proceedings, said: “This is the unified world heavyweight title between two greats of boxing. It doesn’t get any bigger than that. Oleksandr Usyk; an Olympic gold medallist, the pound-for-pound number one, former undisputed cruiserweight, and current unified heavyweight champion.

“Anthony Joshua; also, an Olympic gold medallist, became heavyweight champion in his 16th fight, unified the division in front of 90,000 people in his 19th fight, and has changed the face of the sport around the world. Two tremendous fighters, two tremendous athletes, champions, and ambassadors of the sport that people in Saudi Arabia and all around the world can be inspired by. It’s been an incredible week and the best is still to come.”

Unlike last time when he was widely considered the underdog before taking on Joshua, Ukrainian Usyk (19-0, 13 KO) enters Rage on the Red Sea as favorite following his impressive unanimous decision victory over the Briton. Billed as ‘The Perfect Storm’, last year’s event saw the undefeated Usyk claim the WBA ‘Super’, IBF, WBA, and IBO titles at the Tottenham Hotspur Stadium in London, England, as well as lay his claim for boxing’s coveted ‘pound-for-point number one’ status.

Speaking about his upcoming title defense, Usyk commented: “First and foremost, I want to say thank you to all who made it possible for us to fight here in Saudi Arabia. It is very important for me, my team, my country, and I’m really happy to be here.

“We learned from each other in the first fight, but this is a continuation and the first round on Saturday will be Round 13,” he continued. “We were born to compete for life, for belts, for everything. The one who does not compete, does not win. All our lives are competitions for something or somebody. That’s why we are competing. We’ve had enough time to study each other and this Saturday will be a great, great fight.”

Meanwhile, Joshua is no stranger to Saudi Arabia or to avenging defeat at the first attempt. In December 2019, he defeated Mexican-American champion Andy Ruiz Jr by unanimous decision at Riyadh’s UNESCO World Heritage Site of Al-Turaif, reclaiming the unified WBA ‘Super’, IBF, WBO, and IBO heavyweight titles to avenge his stoppage loss to Ruiz Jr at New York City’s Madison Square Garden six months earlier. This time around, ‘AJ’ is aiming to repeat history while going where few have gone before him by becoming a three-time heavyweight champion of the world.

“It’s a ‘must-win’ fight,” he stated. “Preparations have been tough, but I like the pressure. Robert Garcia, Angel Fernandez, members of my previous team as well; they’ve been pushing me, challenging me, ensuring I stay focused, and positioning me to get the job done and emerge victorious come Saturday night. This is what competition is all about; setting goals I want to achieve and being disciplined enough to follow them through. I’m prepared to do whatever it takes and I’m looking forward to competing this weekend.”

In addition to the Rage on the Red Sea headliners, the press conference saw the fighters featuring on Saturday’s undercard give their thoughts ahead of their respective bouts before facing off with their opponents. The undercard includes Croatian contender Filip Hrgovic vs China’s unbeaten Zhilei Zhang to establish the new number one contender and mandatory challenger for the IBF heavyweight title, and former world champion Callum Smith vs Mathieu Bauderlique in a final eliminator for the WBC light-heavyweight title. Former two-weight world champion Badou Jack and former cruiserweight world title challenger Andrew Tabiti were also present at the press conference, as was Ramla Ali, Benjamin Whittaker, and local professional boxing prospect Ziyad Almaayouf.

These were the details of the news Olympic champ Pichardo wins Euro triple jump, Bol keeps double bid on track for this day. We hope that we have succeeded by giving you the full details and information. To follow all our news, you can subscribe to the alerts system or to one of our different systems to provide you with all that is new.