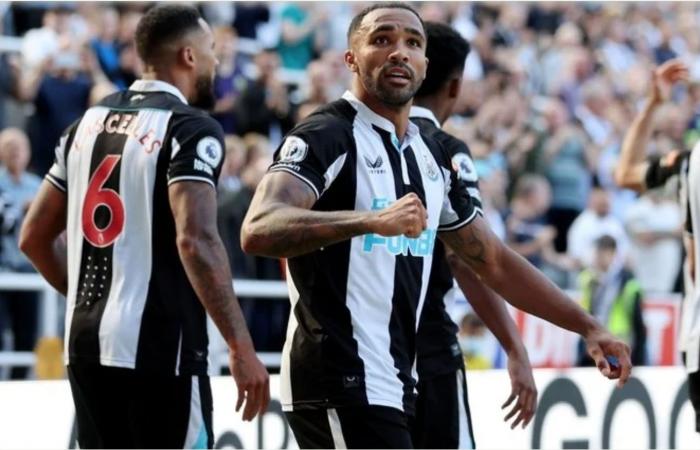 The Magpies’ No. 9 got his Premier League campaign off to the perfect start with a goal in United’s 2-0 win over Nottingham Forest at St. James’ Park.

A smart finish from a low Joelinton cross capped what was a near-perfect performance for Wilson and Eddie Howe’s side.

Having missed large chunks of the last two seasons with injury, Wilson has fallen down the international pecking order, with the likes of Dominic Calvert-Lewin and Patrick Bamford edging ahead of him in England boss Southgate’s thinking.

However, he believes success with Newcastle can propel him into the Qatar selection mix.

“I want to go to the World Cup, so it’s about hitting the ground running,” said the 30-year-old former Bournemouth and Coventry frontman.

“I’m confident in all the players and staff here. We had a good end to the season last year and started well today, but we don’t want to get carried away.”

Newcastle hope to add another two forwards to their ranks before the close of the transfer window on Sept. 1. The form of Wilson, however, has caused a rethink in United’s transfer committee.

A senior striker was seen as a priority following Wilson’s winter injury, the poor form of January signing Chris Wood and the intent to allow Dwight Gayle to leave. But Wilson’s whirlwind return at the back end of last season and his condition in pre-season have seen thoughts turn to younger understudies and wide players capable of providing Wilson with bullets, rather than directly replacing or pressing him.

Head coach Howe was very impressed with Wilson’s opening day show — and is backing him to stay injury-free for Newcastle this season.

“In pre-season, he participated in everything, he wanted to participate in every training session. He’s looked really good considering he had a long lay-off last year and came back at the end of last season. That was probably a really good couple of weeks for him because it built him to a very strong position with his body.

“I think he has enhanced that during pre-season. He scored a few goals.

“His finish today was just pure Callum. It was an excellent finish from a very difficult angle. That’s what he will bring. Hopefully he can have a full season.”

On the transfer front, Arab News has learned that Newcastle will be very active in the final few weeks of the window and have “a number of plates spinning,” according to one high-ranking source.

A move for Leicester City’s James Maddison has stalled, but the Magpies remain keen to improve their lot as summer trading intensifies.

But as things stand, nothing appears imminent, according to Howe.

“I’m not aware if anything has changed. I don’t anticipate that because everyone will now be focusing on the games, and rightly so,” he said.

“I don’t think today changes anything from my view. My squad is an excellent squad of players. I love the individuals we have, and I’d love to add some quality to that.”

These were the details of the news Callum Wilson targets England World Cup spot after leading Newcastle to win in Premier League opener for this day. We hope that we have succeeded by giving you the full details and information. To follow all our news, you can subscribe to the alerts system or to one of our different systems to provide you with all that is new.