Georgina responds to Ronaldo with a touching emotional message 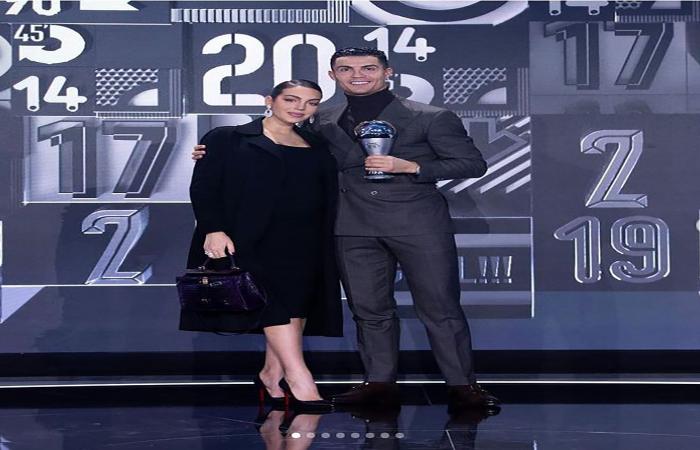 Spanish model Georgina Rodriguez sent a letter of thanks to her partner, Portuguese star Cristiano Ronaldo, on the eve of receiving a special award from the International Football Association “FIFA”.

Ronaldo traveled with his wife Georgina and his eldest son Cristiano Jr. by his private plane to the Swiss city of Zurich, on Monday evening, to attend the annual FIFA Awards ceremony for the best in the world “The Best”.

FIFA was keen to honor Cristiano Ronaldo, 36, with a very special award for his unique achievement in 2021, after he became the best scorer in the history of teams with 115 goals, surpassing the record of retired Iranian striker Ali Daei, who scored 109 goals during his career with his country’s national team.

After receiving the special award from FIFA President Gianni Infantino, Ronaldo said: “First of all I would like to thank my teammates, especially in the national team in the last two years. I never imagined that I would break the world record, which was 109 goals, right? Me? 6 more goals now, and I’m proud of the FIFA award, which I respect a lot. Of course I have to thank my family, my wife, my children and soon I will be a father again, so I feel very proud…”

Georgina published a photo with Don and Cristiano Jr., after winning the FIFA special award, through her account on the “Instagram” website, and said: “God bless you.. You are unique. Thank you for giving us so much joy and teaching us what perseverance and dedication.” We love you.”

The Polish star Robert Lewandowski, Bayern Munich’s top scorer, won the “The Best” award for the best player in the world in 2021, beating the duo: Egyptian star Mohamed Salah of Liverpool, and Argentine Lionel Messi, player of Paris Saint-Germain.

Lewandowski was also the winner of the award last year 2020, equal to the number of Cristiano Ronaldo who won the award for the best player in the world in the first two editions in its current form “the best” in the years (2016 and 2017), and he was absent from the shortlist for the first time in this world.

These were the details of the news Georgina responds to Ronaldo with a touching emotional message for this day. We hope that we have succeeded by giving you the full details and information. To follow all our news, you can subscribe to the alerts system or to one of our different systems to provide you with all that is new.