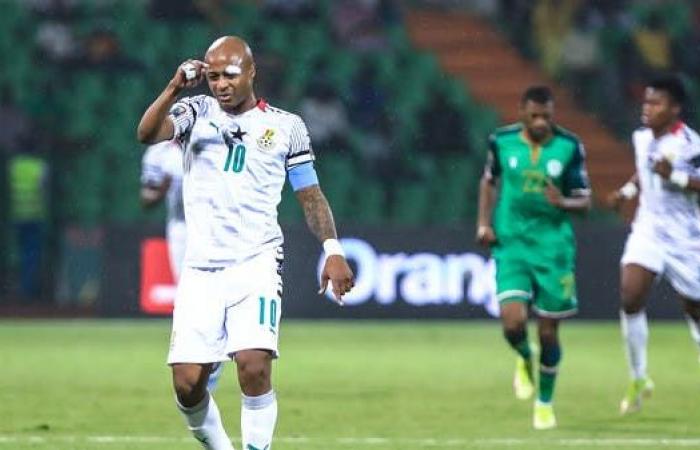 The Gabon national team accompanied its Moroccan counterpart to the round of 16 in the African Nations Cup, after the end of the last third round of Group C, while the Ghanaian team bid farewell to the tournament.

The Gabonese team drew with its Moroccan counterpart 2-2, while the Ghanaian team lost to its Comoros team 2-3.

With these results, the Moroccan team topped the third group with seven points, and was behind the Gabonese team with five points, to qualify together for the round of 16, while the Ghanaian team exited the championship competitions after finishing last in the group with one point, while the Comoros team won its first three points to occupy third place. .

At Ahmedou Ahidjo Stadium, the Gabonese team drew 2-2 with its Moroccan counterpart.

The Gabonese team advanced with a goal scored by Jim Alfinia in the 21st minute, Sofiane Boufal tied for Morocco in the 74th minute from a penalty kick, then Aaron Boubendza scored the second goal for Gabon in the 81st minute, before Achraf Hakimi scored the equalizer in the 84th minute.

And at the Rumdi Adjia Stadium, Ghana exited the tournament after losing to Comoros 3-2.

The goals of the Comoros national team were scored by Alvardo Bennabuhan in the fourth minute and Ahmed Mughni (two goals) in the 62nd and 85th minutes, while Ghana’s Richmond Boakii and Alexandre Dzeko scored in the 64th and 77th minutes.

The match saw Andre Ayew, Ghanaian player, sent off in the 25th minute.

These were the details of the news Gabon accompanies Morocco.. Ghana bid farewell to the nations of Africa for this day. We hope that we have succeeded by giving you the full details and information. To follow all our news, you can subscribe to the alerts system or to one of our different systems to provide you with all that is new.