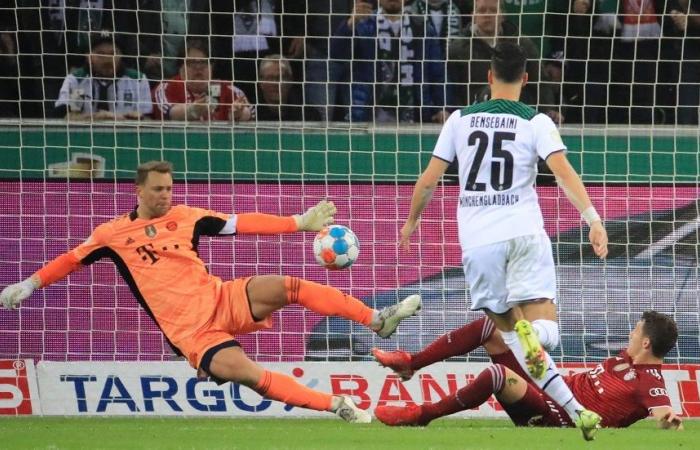 Borussia Moenchengladbach defeated its guest Bayern Munich 5-0 in the match that brought them together today, Wednesday, in the second round of the German Football Cup.

French midfielder Koudio Kone surprised the Bavarian giant with a quick goal in the second minute from the start of the whistle.

Swiss striker Brielle Embolo ended the Moenchengladbach five by scoring two goals as well, at the 51st and 57th minutes of the match.

According to the “Opta” statistics network, Borussia Monchengladbach suffered Bayern Munich’s heaviest defeat in its history in the German Cup competition, as no other team had previously defeated the Bavarian giant with five goals.

She also pointed out that Bayern failed to qualify for the final price for the second season in a row, which is what happens to the team for the first time since its failure to reach the round of 16 twice in a row in 1994 and 1995.

Borussia Moenchengladbach also became the first team to score five goals in the Bavarian net since Borussia Dortmund won (5-2) in the 2012 German Cup final, and the first team ever to score three goals within the first 21 minutes against Bayern in a German Cup match.

For its part, “Squaka” network reported that Bayern lost five goals for the first time since December 1978, when they fell to Fortuna Dusseldorf (1-7) in the German Bundesliga.

These were the details of the news Ben Sabaini leads Monchengladbach to a historic victory over Bayern Munich... for this day. We hope that we have succeeded by giving you the full details and information. To follow all our news, you can subscribe to the alerts system or to one of our different systems to provide you with all that is new.