For the first time in the history of Turkish football, a... 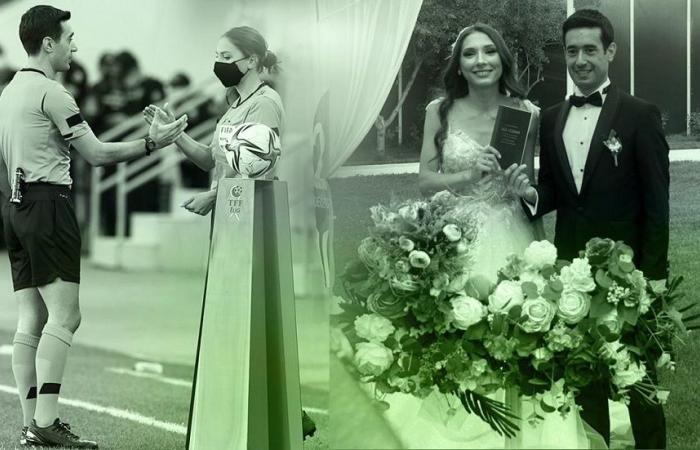 The match of the fourth round of the Turkish First Division Football League, between the Ankara teams Gogo and Genclerbirligi, witnessed the appointment of a couple to work on managing the confrontation, for the first time in the history of Turkish football.

According to the Turkish “TRT” channel, the Bakan couple met in two sports competitions before their acquaintance, and their story began with their training together and then their marriage about 4 months ago, and they registered together for the first time in the history of Turkish football as referees in the same match. They are partners in marital and professional life in a courtyard. stadium.

Burak Bakan indicated that he had to quit playing football during his university studies, despite his love for it, and that he always asked: “How can I work in the field of football?”

In 2008, Burak participated in an arbitration course organized by the Turkish Football Association, to start his refereeing career in the amateur league, and continue in the professional leagues, then took the position of the fourth referee and assistant referee assistant video (VAR) in the Premier League.

He expressed his enthusiasm for the Gentscherberli-Ankara Gogo match, saying: “We were excited from the moment we chose to referee together in this match. This is happening for the first time in Turkey, and we have opened new horizons in our country, and we will carry this burden on our shoulders whether we want it or not. We prepared for this match with our routine. The usual, to arbitrate between two rival teams for several years, and it is really exciting to be with my wife as referees in this competition. We entered the match and did our job not as a couple but as referees.”

As for Ghamza Dormus Bakan, she participated in an arbitration course in her high school, and then began her career in 2013, Habin worked as a candidate referee, regional referee and regional referee within 9 years, and she also wore the badge of the International Football Association “FIFA”, and until today she assumed the task of Arbitration in several matches in the amateur league and the professional league and as a fourth referee.

The wife, Pakan, indicated her enthusiasm when she and her husband appointed two referees in the same match for the first time in the history of Turkish football, saying: “We earned our job in refereeing and our marriage also well, and we get great support from the Central Arbitration Board and the Football Association. Female referees in professional leagues.

These were the details of the news For the first time in the history of Turkish football, a... for this day. We hope that we have succeeded by giving you the full details and information. To follow all our news, you can subscribe to the alerts system or to one of our different systems to provide you with all that is new.