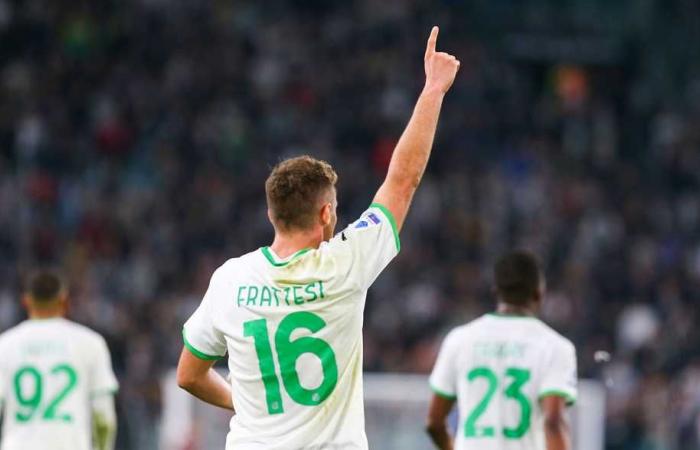 Juventus’ position in the Italian league became more difficult, and the team received a new loss.

Juventus lost to Sassuolo by two goals to one at the Juventus Stadium, in the matches of the tenth round of the Italian League.

Davide Frattisi and Maxim Lopez scored for Sassuolo, while Weston McKinney scored the only goal for Juventus.

The win raised Sassuolos balance to 14 points in ninth place, while Juventus’ balance froze at 15 points in seventh place.

Massimiliano Allegri started the match with several modifications in the formation. Mattia Perin is the goalkeeper, while Alvaro Morata and Paulo Dybala start the attack.

Federico Chiesa also started as a substitute against Inter, while Manuel Locatelli was present alongside Weston McKinney in the midfield.

Juventus almost advanced very early in the second minute. A foul by Federico Chiesa, which was met by Leonardo Bonucci with a header next to the post.

Juventus pressure continued in the seventh minute with a cross from Mattia De Sciglio, and Andrea Conselli, the goalkeeper of Sassuolo, saved it from the line.

And Allegri had to make an early substitution in the 13th minute after Mattia De Sciglio was injured, and Alex Sandro participated in his place.

Sassuolo entered the meeting here. Domenico Berardi hit a powerful ball in the 18th minute, and Mattia Perin saved it with difficulty.

Juventus’ closest chance was in the 38th minute after a cross from Manuel Locatelli, Dybala met with a touch on the post.

Amidst strong Juventus pressure, Sassuolo responded with a first goal in the 44th minute. A wonderful pass from Jorge Devril, received by David Frattisi and deposited in the goal, the first half ended with the visitors leading with a goal.

Juventus started the second half with the first substitution. Juan Cuadrado participated in place of Adrien Rabiot.

Chiesa almost equalized in the 59th minute, and a shot was saved by Konseli.

Here, the Sassuolo coach intervened, and pushed Gianluca Scamaca in the 62nd minute instead of Giacmo Rasbadori.

Allegri responded by entering Caio Jorge in the 63rd minute instead of Morata.

Substitute Caio George almost equalized in the 70th minute. A cross from Cuadrado, met by the Brazilian striker with a double back over the goal.

The equalizer finally came in the 76th minute. A set ball by Dybala, and Weston McKinney headed in the goal.

Juventus pushed with all its lines to realize the winning goal, but the thunderbolt was in the 94th minute with a second goal for Sassuolo. A rebound was passed by Berardi to Maxime Lopez, who was unique in the goal and hit the ball over Perin, to end the meeting with a victory for Sassuolo with two goals against a goal.

The win raised Sassuolos balance to 14 points in ninth place, while Juventus’ balance froze at 15 points in seventh place.

These were the details of the news FilGoal | News | With a +95 goal… Sassuolo... for this day. We hope that we have succeeded by giving you the full details and information. To follow all our news, you can subscribe to the alerts system or to one of our different systems to provide you with all that is new.