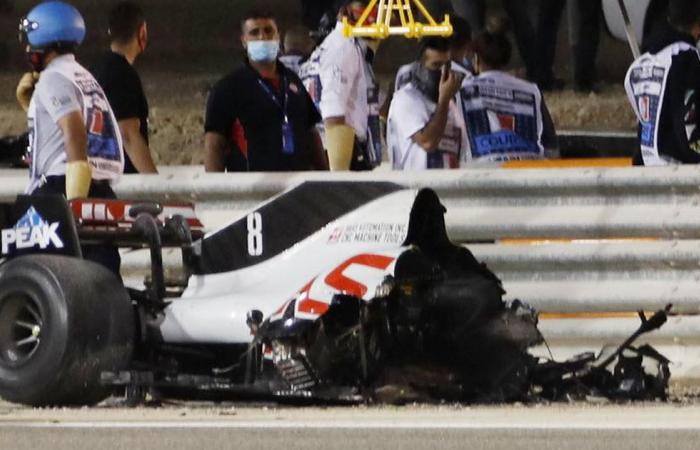 After colliding with Daniil Kvyat, Grosjean banged into the guardrail. His F1 car broke in two and he managed to escape the conflagration himself. Haas’s driver appears to have escaped death. The halo seems to have saved his life here.

Grosjean found himself in the conflagration, but eventually fled the flames just in time. He did, however, step out of the with the necessary support medical car. He would have suffered two broken toes, given the crash he seems to be getting away with it well.

The red flag was waved and the race was temporarily halted. The race resumed at 4.35 pm. Lewis Hamilton eventually won the Bahrain GP after the restart, Verstappen finished second, Alexander Albon third.

According to Haas team principal Guenther Steiner, Grosjean has been taken to hospital with injuries to hands and feet, but nothing more is known. “When you see something like this, all you think is: I hope he’s lucky. You just think: where is Romain? I want to thank the people of the FIA ​​and also the marshalls. They did a great job, ”said Steiner.

Alan van der Merwe, medical car driver since 2009: “I’ve never seen so much fire in those twelve years. This shows that all the systems we have developed are working. The Halo, seat belts, barriers. Otherwise it could have ended much worse. ”

The last time a Formula 1 car was on fire on / along the track was Pedro Diniz, Argentina 1996 .. And through the guardrail: McNish, 2002 Suzuka.

These were the details of the news Video: Horrorcrash Romain Grosjean at Formula 1 race Bahrain | ... for this day. We hope that we have succeeded by giving you the full details and information. To follow all our news, you can subscribe to the alerts system or to one of our different systems to provide you with all that is new.