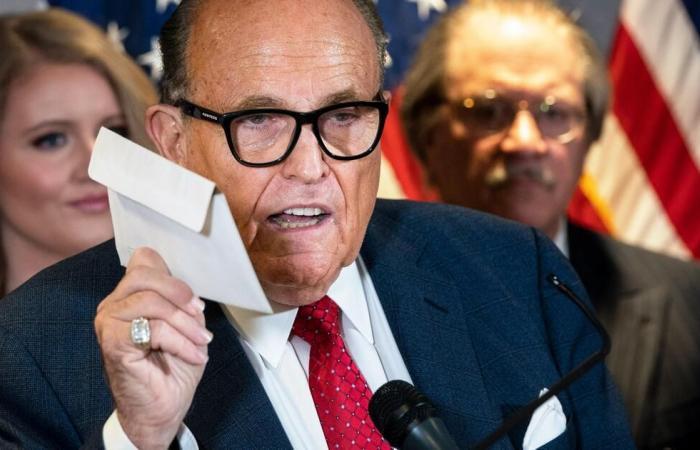 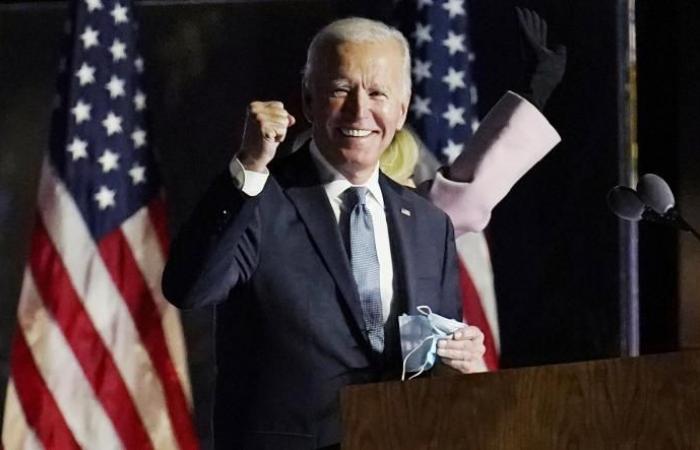 With increasingly absurd appearances, Donald Trump’s lawyer Rudy Giuliani tries to prove that the election victory was stolen. Why does a man who was once an American hero make a joke?

The madness of the whole action would also reveal itself if one Rudy Giuliani Turned off the microphone and didn’t understand a word he was saying. The former is on Thursday New York Mayor in a small press room in Washington, in front of him are the reporters of the capital’s media.

Before the lawyer goes to the microphone, two members of the Trump team quickly hug each other in front of the cameras; Giuliani himself doesn’t even think about one mask to wear.

It’s only been a day since they reported United States the 250.000. Corona-Toten. Giuliani and his people, however, pretend that they exist pandemic only in the imagination of crazy linkers.

Trump Team: There are several ways to win

Probably the ability to deny reality is exactly what the president likes about his lawyer. Donald Trump has the choice lost, there is no doubt about that. Joe Biden leads by more than five million votes; he has the decisive ones Swing States recaptured in the north of the United States, which brought Trump the victory in 2016.

Most recently, Biden was in Georgia confirmed as the winner after another count. Meanwhile, half the world has congratulated him on his victory, von Angela Merkel until Pope.

But behind Giuliani there is a sign that reads: “Several paths to victory” – including those states in red that Trump supposedly can still win.

In the course of his speech, the sweating Trump attorney ran dark paint over the temples, apparently it was hair dye. You can imagine the reactions on social media.

What Giuliani says is reminiscent of the Iraqi information minister Mohammed Saïd al-Sahafwho in 2003 shortly before the victory of American troops in the Iraq declared: “Baghdad is safe. Hundreds of the unbelievers commit suicide outside the city gates. “

Saddam Husseins Head propagandist went down in history as “Comical Ali”. Giuliani declares that there are massive ones proofs for the fact that in the election on Cheated November 3rd has been.

Giuliani was once a man who had a reputation to lose

Republican inspectors have been systematically prevented from doing their job. “This is not about a single case of Election fraud in a state, “he says. In fact, everything speaks for the fact that there was a sophisticated plan to steal victory.

The only problem is: Giuliani stays this afternoon too solid evidence guilty of all of this. Donald Trump doesn’t have to worry about that.

The president’s strategy is simple. He’s working on the myth that an unscrupulous Democratic party cheated him out of winning the election – and that unfaithful Republicans then rammed the knife in his back.

That has nothing to do with reality. But that is meaningless as long as enough US citizens believe the lie: Now almost say 70 percent of Republican voters, they creep the worry that Choice is manipulated turn into.

The question is why is Giuliani playing this dirty game. He was once a man with a reputation to lose.

Giuliani served as Mayor of New York for eight years. He has the crime pushed back in town and made it to the New Yorkers after the Attacks of September 11, 2001 to give courage and confidence again.

The Giuliani myth grew out of the ruins of the World Trade Center, he became the most famous mayor in the world, too “America’s Mayor”. The “Time” magazine took him on the cover; the British Queen knighted him.

Also read: All current information about the corona pandemic in our live blog

After his time in the town hall, he does his fame to money. He took $ 100,000 per speech and started a consulting firm.

Giuliani was not squeamish when choosing his customers. He served Purdue, the pharmaceutical company that made a lot of money on addictive pain relievers.

Giuliani was soon drawn back into the spotlight. In 2007 he applied for the Republican presidential nomination, but the project failed miserably.

Joe Biden blasphemed at the time that Giuliani basically only mastered one sentence: “Noun – Verb – 9/11”. In fact, Giuliani had put his reaction to 9/11 at the center of his campaign at the time. That was not enough by far.

Trump now had the opportunity for Giuliani to step onto the big stage again. He was already defending his old friend from New York during the election campaign, even when everyone else disliked it.

“Men just talk like that”Giuliani said on TV when a sound recording was released in the fall of 2016 in which Trump boasted, To grasp women in the crotch without being asked. Im White house Giuliani became a mixture of consigliere and hammer for Trump. Officially, he had no role – but that only made it all the easier for him to do the dirty jobs.

Giuliani is in danger of ins jail get

In the Ukraineaffäre it was Giuliani who made the completely unfounded claim that Joe Biden had one Public prosecutor fired in Kievto his son Hunter to do a favor. And shortly before the November 3rd election, Giuliani provided a New York tabloid with dirty stories about the candidate’s son that no serious medium wanted to touch.

But the rubbish that Giuliani spreads rubbed off on himself. “America’s Mayor” became a joke.

As the comedian and filmmaker Sacha Baron Cohen his new one in autumn “Borat”-Film published in which Giuliani is first interviewed by a young woman and then from the – wrong – Lure a reporter into the bedroom (“Shall we have a drink in the bedroom?”), the ridicule is great – but nobody is surprised at Giuliani. It is the image of a man that most Americans already have in their heads of Giuliani.

In that way, he has nothing more to lose anyway. The 76-year-old is fighting his last fight with Trump.

As with the President, Giuliani is also in danger of ins jail Joe Biden should take power in Washington. Giuliani has been sitting the New Yorker for many months Public prosecutor in the neck, for which he once worked himself.

In addition, Giuliani is paying his loyalty well: Allegedly he wants to charge the president’s team a rate that is as serious as his work as a lawyer: $ 20,000 a day.
© DER SPIEGEL

The USA have voted, but no winner has yet been determined. After Trump had unjustifiably proclaimed himself the winner on Wednesday morning of our time, Biden was now sure of victory. Click through the most important quotes about the US election. (awa / lh / msc / dpa)

These were the details of the news Rudy Giuliani: From “America’s Mayor” to the joke for this day. We hope that we have succeeded by giving you the full details and information. To follow all our news, you can subscribe to the alerts system or to one of our different systems to provide you with all that is new.