Barcelona against Real .. The absence of Messi and Ronaldo for... 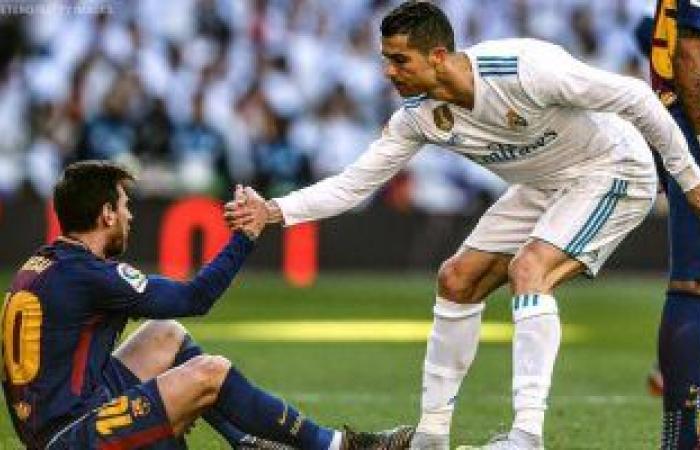 The Clasico match between Barcelona and its traditional rivals Real Madrid, scheduled for next Sunday afternoon, at the Camp Nou stadium, the stronghold of the Catalan team, at the top of the tenth round of La Liga matches, is witnessing a new event that has not happened in 16 years.

Sunday’s confrontation will be the first that will witness the absence of the Argentine star, Lionel Messi and Cristiano Ronaldo, for the first time since 2005, after they left the Spanish League, after the first left for Paris Saint-Germain last summer, while the second left for Italian Juventus in the summer of 2018.

The first appearance of Argentine star Lionel Messi in the Clasico confrontations, during the meeting of November 19, 2005, after his main participation, which Barca won with three clean goals in the “Santiago Bernabeu”, and he made his team’s first goal signed by former Cameroonian star Samuel Eto’o.

The Argentine flea is the historical top scorer in the Clasico with 26 goals in all competitions, and he fought during his career with Barcelona against Real Madrid, in 45 games.

On the other hand, the first appearance of the Portuguese star Cristiano Ronaldo with Real Madrid in the Clasico confrontations, in the meeting of November 29, 2009, which Barcelona decided with the goal of the Swedish star Zlatan Ibrahimovic, the current Milan striker.

Ronaldo is the second top scorer in El Clasico matches with 18 goals, after playing 30 games against the Catalan team in all competitions.

These were the details of the news Barcelona against Real .. The absence of Messi and Ronaldo for... for this day. We hope that we have succeeded by giving you the full details and information. To follow all our news, you can subscribe to the alerts system or to one of our different systems to provide you with all that is new.