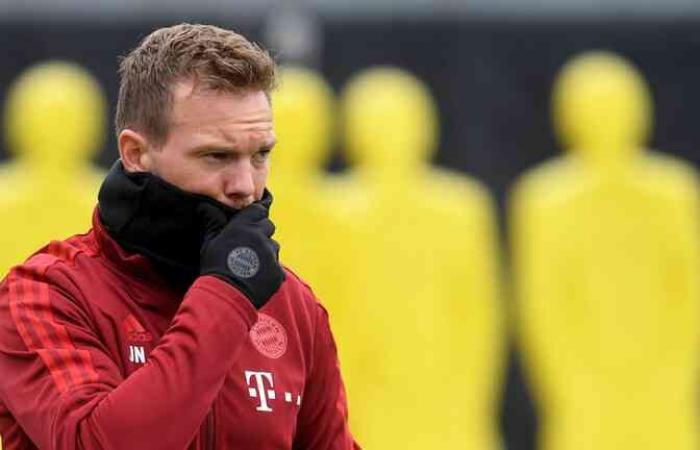 Bayern Munich announced Thursday that its new coach, Julian Nagelsmann, has contracted the Corona virus, despite the latter receiving the anti-vaccine, a day after he was absent from the match against Benfica, Portugal, by four goals, in the third round of the Champions League group E competitions.

The German champion in the past nine seasons explained on Twitter that “Julian Nagelsmann has been confirmed to be infected with the Corona virus, despite receiving the full vaccine. He will return to Munich separately from the team on a medical plane and will be placed in quarantine.”

The 34-year-old was not present at the Stadio da Luz on Wednesday night to witness his team’s victory over hosts Benfica and tighten his grip on his group with the full mark with 9 points from 3 victories, despite traveling with Bayern to Portugal on Tuesday, but he remained isolated in the hotel as a precaution .

On Wednesday, the Bavarian club had referred to “flu symptoms”, without adding further clarification.

In the same context, the club’s sporting director and former Bosnian international player Hasan Salimadjic told the “Dazon” broadcasting platform that Nagelsmann “has symptoms of influenza. He did not want to come to the match, so his assistants will replace him.”

According to the regulations of the Bavarian Ministry of Health, anyone who has tested positive for the coronavirus must remain in quarantine for 14 days.

It is expected that Nagelsmann will miss four meetings with Bayern, starting against Hoffenheim on Saturday in the ninth stage of the “Bundesliga”, which opens with Mainz’s meeting with Augsburg on Friday, Borussia Moenchengladbach in the second round of the local cup competition on October 27, and Union Berlin in the league on the 30th. From him and the return match at home against Benfica in the continental competition (Next November 2), where he is likely to return to take over his technical duties against Freiburg on the 6th of it.