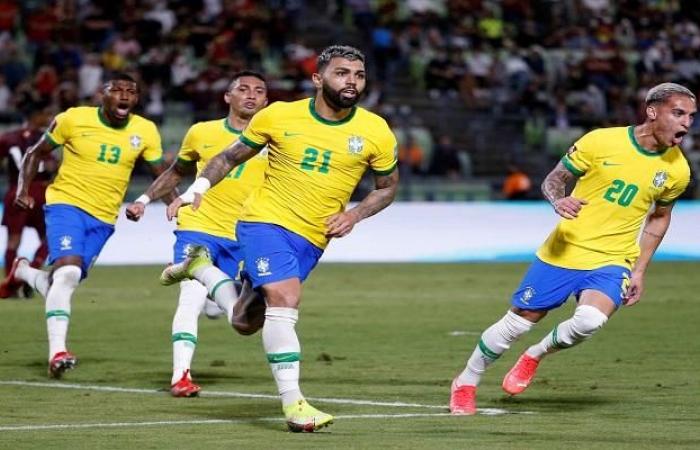 Brazil continued its perfect streak in the South American World Cup qualifiers after coming from behind against Venezuela to win 3-1.

Brazil compensated for its late goal and scored 3 goals in the second half to win 3-1 against Venezuela at dawn on Friday, to maintain the mark of complete success in the 2022 World Cup qualifiers.

The Venezuelan national team had never beaten Brazil in the World Cup qualifiers in 17 previous attempts, but their hopes were raised after an early lead through Eric Ramirez, who turned Yverson Sutildo’s pass into the net after Fabinho and Marquinhos stumbled in a crucial moment.

But Brazil equalized the result when Marquinhos headed a corner kick in the 71st minute, before Gabriel Barbosa scored from the penalty spot with 6 minutes remaining, and Anthony made the score 3-1 in added time.

Brazil consolidated its supremacy at the top of the South American qualifiers, as it continued to lead the full mark with 27 points.

In another match, Argentina failed to score for the first time since June 2019, but a 0-0 draw with hosts Paraguay on Thursday preserved their unbeaten record in the South American qualifiers for the 2022 World Cup.

Despite the stumble, the Argentine national team continued its record of 23 unbeaten matches under coach Lionel Scaloni, to occupy second place in the qualifiers with 19 points behind Brazil, which has 27 points.

The top four teams automatically qualify for the next World Cup finals, while the fifth-placed team plays a playoff against a team from another continent.

These were the details of the news World Cup qualifiers.. Brazil continues its perfect record and Argentina stumbles for this day. We hope that we have succeeded by giving you the full details and information. To follow all our news, you can subscribe to the alerts system or to one of our different systems to provide you with all that is new.