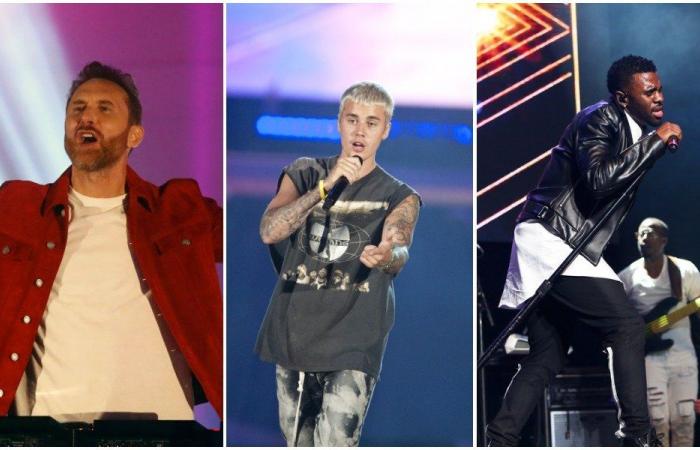 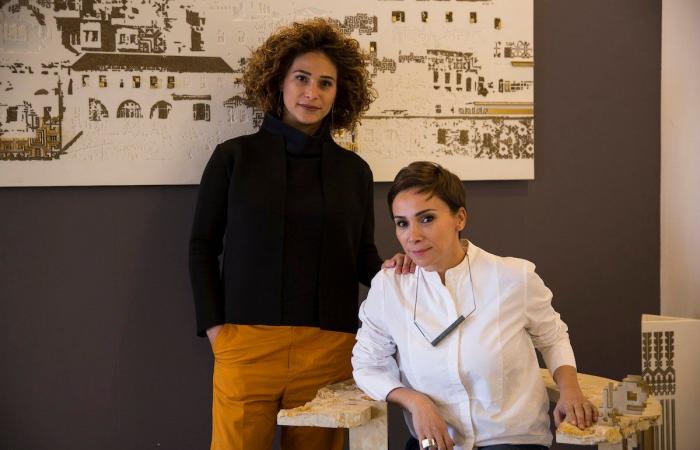 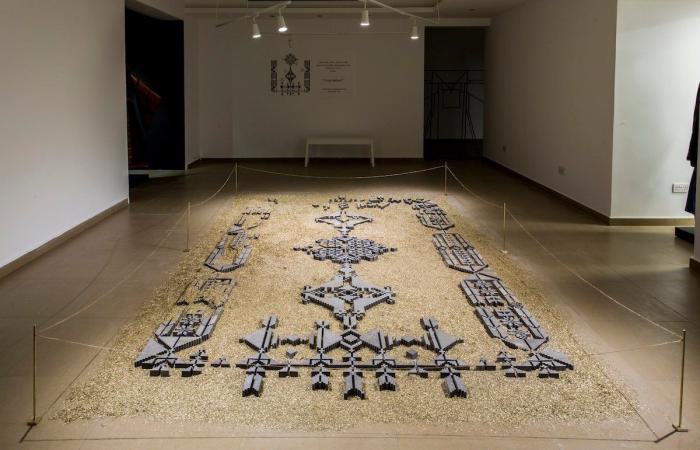 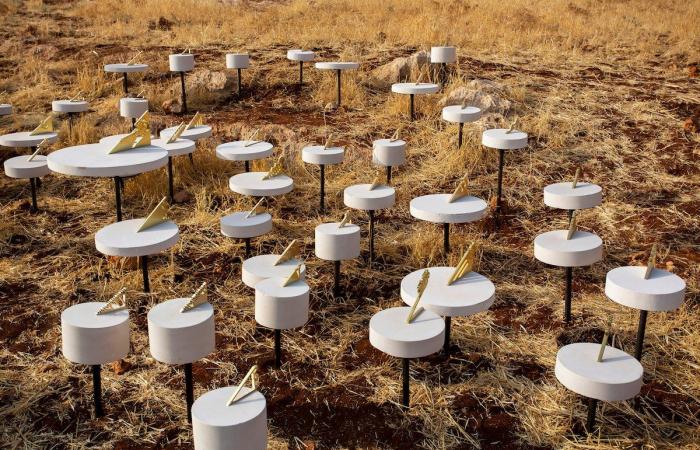 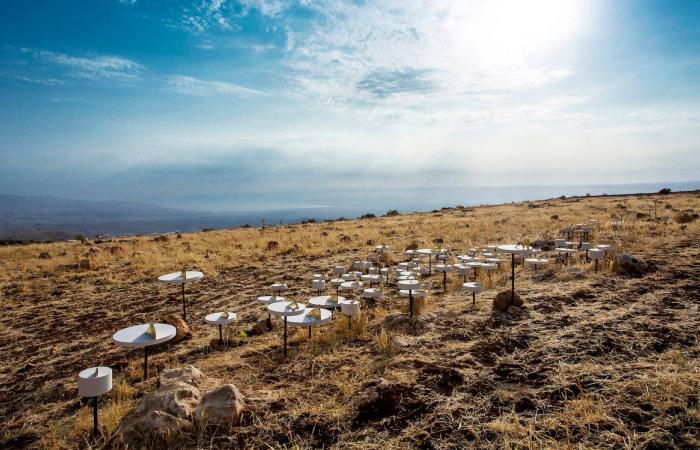 Thank you for reading the news about Justin Bieber, Jason Derulo and Tiesto to perform at inaugural Saudi Arabian Grand Prix and now with the details

LONDON: A woman strides purposefully through a field of golden wheat. She exudes confidence and joy. Her richly embroidered gown and distinctive Smadeh (headpiece) identify her as coming from Gaza, Palestine. She carries a basket of gifts including the famed grapes from her region.

Who is she and where is she going? Those are the first questions that come to mind when viewing “Wa Mashat” by artists and sisters Nisreen and Nermeen Abudail, co-founders of Naqsh Collective.

“She is supposed to be going from Gaza to Amman, Jordan,” Nisreen tells Arab News. “The trip should take no more than a couple of hours walking. But with what is happening right now in Gaza with the sanctions and all the difficulties that Gazan people are experiencing, the trip is impossible.  It is impossible even to think about crossing borders from Gaza to Amman. Living in Gaza is agony because of the situation.”

The sisters say that, as second-generation refugees from Palestine, they sometimes see themselves in the image of the Gazan woman.

“We embody this lady from time to time through our Naqsh journey. This journey is peaceful, joyful and full of determination and pride. She is determined to push though all the obstacles, carrying her basket of goods on her head out of the Gazan siege, to share them with the world,” says Nermeen.

Nermeen indicates the little bird perched in the bottom-right of the image.

“The sunbird — which is the national bird of Palestine — is symbolic of waiting and hope; it is an icon of freedom. It is not flying, but sitting and waiting for the woman,” she explains.

Nisreen studied architecture at Jordan University of Science and Technology. After working for a time in the US, she is now based in Jordan. Her younger sister, Nermeen, currently based in Dubai, studied graphics.

They are particularly inspired by the intricate embroidery (tatreez), which, for many Palestinian women over the centuries, has been a powerful way of communicating important information about themselves — including their hometown and their marital or financial status. Passed from mother to daughter, this silent language stitched meticulously on their garments speaks volumes.

Nisreen and Nermeen have taken the delicate silk threads and reimagined them in unexpected, contemporary forms using wood, metals, stone and marble.

The intricate work “The Bride’s Carpet,” currently on show as part of the Naqsh Collective’s “Unlived Moments” exhibition at the Gazelli Art House in London, is a good example.

It tells the fictional story of a mother who gifted her daughter a hand-woven carpet for her wedding. Fearing that Israeli forces would break into her house and steal the precious gift, the mother buried it in her garden.

The story of hurriedly burying precious family treasures would be familiar to many of the 700,000 Palestinian Arabs forced to flee their homes in 1948 when Israeli forces stormed through their towns and villages. Echoes of this traumatic past came vividly alive for Nisreen and Nermeen when they discovered a carpet buried in a garden.

“The Bride’s Carpet,” made up of hundreds of pieces of volcanic basalt stone, is engraved with stitch patterns from all over Palestine and presented as partly buried under shavings of upcycled brass. Details in the work include the bride as the moon and the scene where she faces her mother-in-law, represented by two peacocks.

“We wanted to shed light on stories from our heritage and people suffering from the occupation,” explains Nermeen. “Many families buried their belongings next to a well, or a fig or olive tree, intending to retrieve them upon their return.”

The main theme of “Unlived Moments” is a thread that runs through their work. You see it in pieces such as “Akka,” which shows Palestinian youths standing at the edge of Akka’s famous wall in the old harbour preparing to leap into the Mediterranean waters below — a rite of passage marking the transition from boyhood to manhood. For the young Palestinian boys of the diaspora this is a moment they only get to live through stories told by their grandfathers.

“We are nostalgic about living unlived moments that we have never experienced,” Nermeen says. “We are celebrating at the same time as shedding light on the challenging and even unliveable circumstances experienced by the people of Gaza on an everyday basis.”

Another powerful story is told through their installation “Unit and Diaspora” (WihdehWaShatat). This open-air, 180-piece exhibit captures the relationship of the Palestine people with the passage of time.

In it, a series of sundials indicate eight key locations of the Palestinian diaspora; Jordan, Iraq, Egypt, the UK, the US, Chile, Libya and Kuwait.  The dials are made of limestone and the gnomons (the part of a sundial that casts a shadow) of brass.

“The sundials are made of local stone which is strong but can get chipped or eroded if moved from one place to another,” Nisreen says. “It can get distorted and damaged, just like refugees who can be scarred forever when they are relocated. The brass piece, which incorporates elements of Palestinian embroidery, symbolizes cultural heritage; brass represents durability, richness and an everlasting effect that won’t fade but grows deeper and richer with time.

“The minute the sun hits the gnomon we get the reflection on the stone,” she continues. “This reflection adds value to the place where the sundial is located, which is exactly the effect Palestinian refugees have on the places they move to. They add value to everywhere by reflecting their culture.”

The installation will be placed on the roof of the new Naqsh studio opening next year just over the border from Palestine, the sisters say.

“The new location will be called Naqsh Experience. People can come and visit the studio and see thobes and art, and connect to nature and with the whole aura of the Palestinian story,” Nermeen says.

The sisters say they want their exiled and trapped compatriots to spread their wings and “fly free,” like the bird patiently waiting in the field of golden Gazan wheat.

“We are always waiting for a solution to go back to our land — waiting for stability and better life chances,” Nisreen says. “I remember my grandparents used to wait for the news around 8 p.m. every day to update themselves about the political situation — the peace treaties, the conferences. They are still waiting to go back. Until now Palestinians all over the world are still waiting.”

These were the details of the news Justin Bieber, Jason Derulo and Tiesto to perform at inaugural Saudi Arabian Grand Prix for this day. We hope that we have succeeded by giving you the full details and information. To follow all our news, you can subscribe to the alerts system or to one of our different systems to provide you with all that is new.