Watch the scenes of renewing Salah Mohsen’s contract with Al-Ahly to... 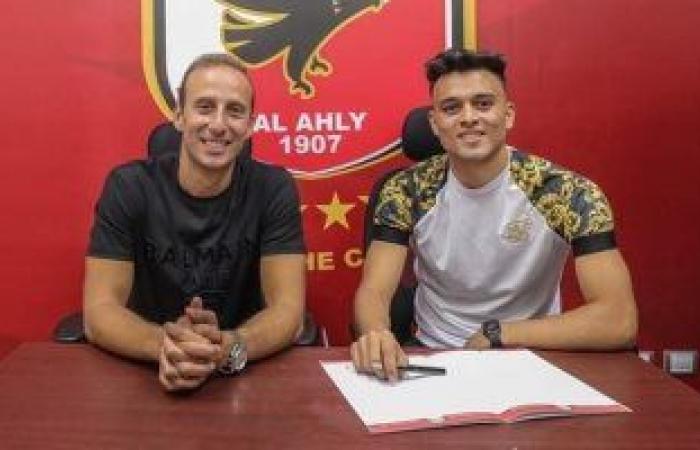 The official Al-Ahly club page on Twitter published the scenes of renewing the contract of Salah Mohsen, the Red Team striker, for a period of 5 years to come, to continue with Al-Ahly until the summer of 2026.

Salah Mohsen participated in 67 matches in all tournaments with Al-Ahly, with a total of 2053 minutes of play, and succeeded in scoring 15 goals and assisting two goals. He was crowned with the Red Genie in two Premier League championships, the Egypt Cup, the African Super Cup and the local Super Cup, in addition to winning the African Champions League twice, in addition to the bronze in the Club World Cup.

Salah Mohsen was born on September 1, 1998 in Sharkia Governorate. Salah Mohsen joined the Enppi junior team in 2008. Amr Fahim, the former petroleum team defender, is the first to discover his talent and nominate him for the first team, while Hani Ramzy, the former technical director of Enppi, is the first to He escalated it in the 2015-2016 season without a basic participation.

Salah Mohsen became the most expensive player in Egypt, throughout history, after completing the procedures for his transfer to Al-Ahly for 38 million pounds in the 2018 season, before Al-Ahly loaned him to Smouha and returned him again after his brilliance

Salah Mohsen, the star of Al-Ahly, proved his eligibility to obtain a great opportunity to announce himself and his right to reserve a place in the main formation of the Red Genie, after the golden alternative to Pitso Musimani became the technical director of Al-Ahly from the red bench at the level of the right and left wing, after he scored impressive goals, topped by his goal in the net. Zamalek in the Premier League.

Salah Mohsen is one of the promising players, and the future of the red team will be due to his young age, especially as he has speed and skill, and he also has the ability to play in more than one attack center.

These were the details of the news Watch the scenes of renewing Salah Mohsen’s contract with Al-Ahly to... for this day. We hope that we have succeeded by giving you the full details and information. To follow all our news, you can subscribe to the alerts system or to one of our different systems to provide you with all that is new.