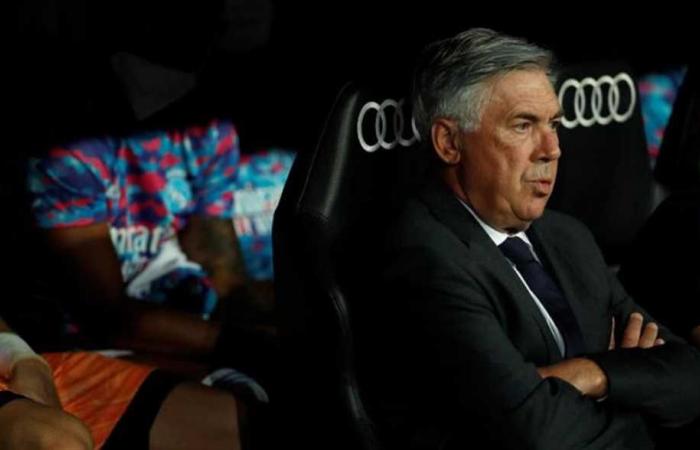 Real Madrid coach Carlo Ancelotti expressed his concern over the strong level that Valencia has shown in the last period.

Real Madrid will visit Valencia at Mestalla on Sunday evening at the top of the fifth round of the Spanish League.

Ancelotti said during the press conference: “The team will recover physically before the Valencia match. I think we will be fine by tomorrow. A strong match awaits us because Valencia is playing well, going through a series of distinguished results and having confidence.”

And he added, “It worries me that Valencia is a team that plays well and with a lot of intensity. We will face a team that is going through a special stage.”

He justified the absence of Eden Hazard from the Inter Milan match and his stay on the bench: “Hazard did not play against Inter because he suffered from knee pain, and until yesterday he was in pain, we will see what happens. He has improved, but we have to deal with him carefully, because because of his injuries In the past, his participation in two matches in a row will be a complicated matter. I see him with confidence, we hope that he will return to his best condition.”

And he talked about Gareth Bale’s injury: “We don’t know how long Bale will be absent until the moment. The injury is a bit strong. Before that, he was going through a special stage with us and with his national team.”

He pointed out: “Our team is fine, and the statistics say that we are improving in the second half. We need to improve our level in the first half. We are starting with a little bit.”

He praised Eduardo Camavinga: “We knew Camavingas physical and technical capabilities, and then he showed his character on the field, which is something I did not know. He is a player who trusts his abilities.”

Ancelotti was asked if he spoke with Marco Asensio and Isco to explain their lack of participation: “I speak with them of course, it is important to talk to the players when I make decisions, it is difficult for me to ask the players to warm up and then not involve them, and this must be explained to them. Sometimes you intend to involve a player and then The match changes, I deal with the match, not with individuals.”

He also praised the owner of the winning goal against Inter: “Rodrygo is an integrated striker, very fast and cool in front of the goal and is good at playing on the wings and in the depth, he is the present and the future of Real Madrid.”

And whether Real Madrid had the money to buy Halland and Mbappe, he explained: “I am not talking with the club at the moment about the transfer market, but about what the team should do at this stage.”

He also dedicated a tribute to the brilliant Vinicius Junior: “Vinicius has amazing dribbling abilities one on one. He started this season well and scored. I am not a magician, but just a coach who gives the players the confidence they need to get out what they have.”

And about the young Brazilian’s ability to carry the team alone: ​​”The team’s carrying depends on the personality, charisma and quality that the player possesses. Vinicius carried the team on his back against Levante, we avoided the loss, he is young and he does not have to carry the team except by showing his quality, and when he becomes older he will be able to carry him With his personality and experience.

Ancelotti explained that his list does not include a replacement for Casemiro: “The defensive capabilities that Casemiro possesses are not easy to find in other players. We do not have a player with the same characteristics, I wish Casemiro would play all the games. If he missed, we would have to change the way we play a little, the solution might be By playing with two pivots.

He concluded: “The rotation between the players is indispensable, because some players feel tired, and therefore the rotation is something we will be forced to.”

Real Madrid has 10 points from 4 rounds, the same as Valencia.

These were the details of the news FilGoal | News | Ancelotti conference: Hazard suffers from... for this day. We hope that we have succeeded by giving you the full details and information. To follow all our news, you can subscribe to the alerts system or to one of our different systems to provide you with all that is new.