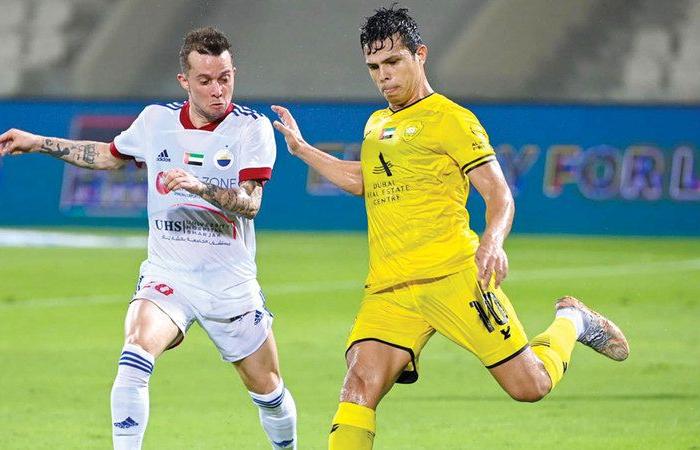 Brazilian media highlighted the brilliance of the Brazilian player Bernard Durate with Sharjah in the first three rounds of the ADNOC Professional League, noting that the fans of Atletico Mineiro dreamed of restoring the services of the “magician”, although the latter joined the “king” in the current summer transfer period.

And the newspaper “UOL” reported that while Bernard Duraty completed his 29th year on September 8, a large number of Atletico Mineiro fans expressed their desire to restore the services of the player who grew up in the ranks of “Alfingero” and starred with the team from 2011 to 2013, as he led Atlético Mineiro to win the Libertadores Cup for the first time in its history in 2013 before moving to Shakhtar Donetsk of Ukraine in a record deal worth 25 million euros, although the market value of the Brazilian player was only 10 million euros at the time.

She explained that “Bernard, who is the biggest sale in the club’s history in its 113-year history, joined Sharjah with a contract that extends for two seasons, but the Atletico Mineiro fans follow the player closely and follow him on his personal accounts on social media, and demand that he return to Brazil, Especially that Atlético Mineiro qualified for the semi-finals of the Copa Libertadores and will play against defending champion Palmeiras, while in the second match, Flamengo of Brazil will meet with Ecuadorean Barcelona.”

She indicated that Bernard Duratte flirted with the Atlético Mineiro fans when the Brazilian player posted on his account on “Instagram” congratulations on the occasion of the 113th anniversary of the founding of the club, stressing that he felt proud that he played in the team, stressing that he has a lot that he can offer the club in next period.

She explained that the Brazilian player starred greatly with Sharjah and confirmed that he is one of the most prominent foreign players in the UAE league, after he contributed to the “king” winning the first three matches in the competition, and the team topped the standings with nine points, equal with Al Ain with the same balance.

It is noteworthy that Sharjah contracted Bernard from Everton for one million euros, although the market value of the Brazilian player is 12 million euros, as the “king” hopes to replace the former Brazilian international, the departure of Italian star Igor Cornado to the Saudi Federation.

Bernard Duraty participated with Sharjah in the first three rounds of the ADNOC Professional League, and the Brazilian player starred clearly after he scored the winning goal against Ittihad Kalba in the deadly time, before contributing to the dramatic victory of the “King” with ten players over Al Wasl with three goals against two goals by making a goal. Winning in the deadly time of the Congolese player Ben Malango.

These were the details of the news Atletico Mineiro fans dream of joining Durati from Sharjah for this day. We hope that we have succeeded by giving you the full details and information. To follow all our news, you can subscribe to the alerts system or to one of our different systems to provide you with all that is new.