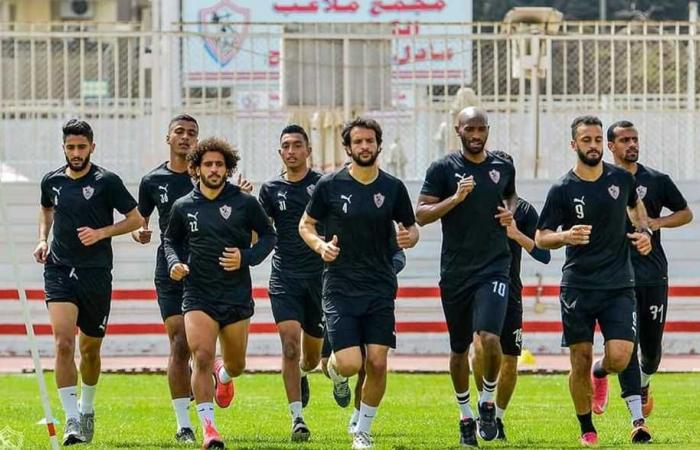 The players of the first football team in Zamalek club performed physical exercises and stretches in the halls complex of Dr. Ashraf Sobhi under the supervision of the technical staff of the team led by the French Patrice Carteron.

Tariq Hamed, Mustafa Fathi, Ahmed Sayed Zizou and Moroccan Ashraf Ben Sharqi, players of the first football team of Zamalek Club, participated in the team’s training this evening, Tuesday, at Abdel Latif Abu Rahilah Stadium at the club’s headquarters, after the end of the rest that the international players received by the technical staff of the team led by the French. Patrice Carteron.

And the technical staff gave a break to each of Muhammad Abu Jabal, Mahmoud Hamdi Al-Wansh, Omar Al-Saeed, Mahmoud Abdel-Aziz, and the Tunisians, Seif Al-Din Al-Jaziri and Hamza Al-Mathlouthi, a break from training, after they received the Corona virus vaccine today, Tuesday.

The team fought a strong division in the middle of the field during the training and witnessed the brilliance of Mustafa Fathi, Ahmed Sayed Zizou and Tariq Hamed.

The white team is preparing to meet Aswan, scheduled for next October 2, at the new Suez Stadium, in the semi-finals of the Egypt Cup.

The team is scheduled to organize a closed camp in Borg El Arab, starting on September 20, in preparation for the upcoming Aswan match in the cup.

These were the details of the news FilGoal | News | Zamalek training for this day. We hope that we have succeeded by giving you the full details and information. To follow all our news, you can subscribe to the alerts system or to one of our different systems to provide you with all that is new.