Adnan Darjal wins the presidency of the Iraqi Football Association and... 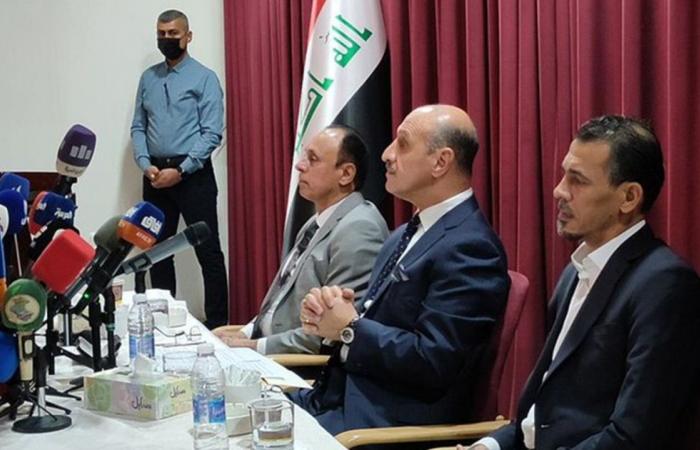 The Iraqi Minister of Youth and Sports, Adnan Darjal, won the presidency of the Football Association after defeating yesterday’s colleague, former international star Sharar Haider, in the electoral race that took place today, Tuesday in Baghdad, to be the first sports minister to run for this position.

And the Iraqi Football Association published – on its Facebook page – that Adnan Darjal won the presidency of the Federation after obtaining 48 votes against 16 votes for his competitor, Sharar Haider. The elections resulted in the victory of Ali Jabbar as the first deputy, and the former Iraqi national team captain Younis Mahmoud as the second deputy, without competitors. More than 26 candidates competed for membership in the administration of the next 10-member federation.

The elections to choose a new board of directors for the federation took place after the end of the mission of the temporary normalization body assigned to the International Federation (FIFA) early last year, against the background of a collective resignation submitted by the members of the former federation, due to judicial circumstances in the courts in which he was a party.

Sharar Haidar said in a press statement on the eve of the elections, “It represents a competition for him and a challenge to the government’s authority and confronting public money. The other competitor, Adnan Darjal, occupies the position of minister. All the clubs are in his hands and the public money is at his disposal.” Haider, 54, who heads the Karkh club’s management, added, “I will leave everything to the election hall, and to the opinion and convictions of the General Authority.” Haidar threatened to resort to local and international courts because Derjal’s nomination is incorrect, as he holds a government position, and this contradicts the laws.

On the other hand, sports journalist Ghazi Shaye considered that the conflict is tilted towards men, noting that his work as Minister of Sports is close to clubs and other sports institutions. Alleviating its problems, as well as being one of the symbols and flags of football, this makes him eligible to win the presidency of the Federation.”

Derjal is also preparing for non-sporting electoral competitions, by announcing his candidacy for the Iraqi parliament elections, to be a representative of one of the electoral districts within the capital, Baghdad.

The men of his country’s arrival to the World Cup Qatar 2022 is one of the top priorities of his mission, after he succeeded in convincing football officials in the Gulf to grant Iraq the hosting of the “Gulf 25” tournament in Basra at the end of this year.

The nomination of the sixty-year-old, who is known as the rock of Iraqi defense, as Minister of Youth and Sports last year sparked a lot of controversy despite his great popularity, as his choice for this position came away from the principle of sectarian quotas.

At the time, the Speaker of Parliament who leads that alliance, Muhammad al-Halbousi, commented, “Adnan Darjal, Dukan Dam,” referring to his defensive solidity when he was a giant player, “outside sectarian calculations and crossed them.”

Surprisingly, Derjal found himself in the corridors of politics, after he was named Minister of Youth and Sports in May last year.

Darjal launched his program 48 hours before the election, focusing on priorities that he believed the administrations of previous unions had not been able to achieve.
He pledged to devote his experience to the administrative and institutional work that he gained during his career in order to contribute to building a promising and bright future for Iraqi football and spreading it as a cornerstone of Iraqi society and launching the (Dream 2030) project for age groups.

The fierce defender’s men began his career with Al-Zawraa Club, one of the most famous clubs in the capital, in 1979, and after 3 seasons he moved to the Student Club, before settling in 1984 in the ranks of Al-Rashid team, whose administration was headed by Uday Saddam Hussein, son of the late Iraqi president.

Recourse to the courts

After Drajal finished his career as a player, he was appointed coach of the Iraqi national team in 1992, then became a member of the Football Association’s administration. He was, along with his colleague Hussein Saeed, one of its most prominent members. In 1995, he moved to Qatar and worked as a coach with Al Wakra, Al Shamal and Al Arabi clubs.

Derjal, who enjoys wide and important relations with Gulf federations, retired from training in 2004 to devote himself to the administrative field with some Qatari clubs, and also to devote himself to the economic and commercial field.
After 25 years of leaving the country, he returned in 2018 aspiring to the position of the presidency of the Iraqi Federation, but his ambition collided with the statute of the Federation, which was considered by men as a fraudulent system and subject to manipulation in order to exclude him from candidacy.

Yesterday’s defender’s ambitions did not stop at the limits of his dimensions, so he resorted to the courts that convicted the former president of the federation, Abdul Khaleq Masoud and his deputy, Ali Jabbar, on charges of tampering with the statute. The two parties were forced to settle a collective resignation.

On the other hand, Haider, who held the position of first vice-president of the former Federation, began his career with Al-Rasheed Club and joined its ranks in 1986 along with important names, including the late Ahmed Radi and Natiq Hashem, as well as men and Karim Muhammad Allawi.

He represented other public clubs, including Al-Zawraa and Al-Quwa Al-Jawiya, before playing with the Algerian youth of Batna.

These were the details of the news Adnan Darjal wins the presidency of the Iraqi Football Association and... for this day. We hope that we have succeeded by giving you the full details and information. To follow all our news, you can subscribe to the alerts system or to one of our different systems to provide you with all that is new.