Watch: Shikabala cries on the air 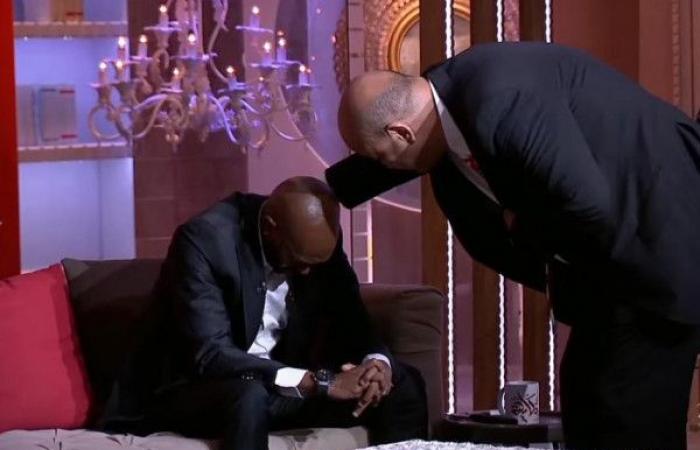 Mahmoud Abdel Razek “Shikabala”, captain of the Egyptian club Zamalek, threatened to resort to the International Football Association “FIFA”, if his 8-month ban by the Egyptian Federation continues, due to the events of the league title match against Al-Ahly Bank.Shikabala said on the “Al-Hekaya” program on the MBC MASR channel: “I did not make any mistake, and it is natural for me to defend my team players, and it is normal for the players to interact with me because they saw what happened, and I do not know the reason for this punishment, and if it continues, I will resort to FIFA to get my right.” .

He added, “I left Petrosport Stadium after the events of handing over the shield and went to my house and the club handed me the shield in my house. I do not know why the television broadcast was cut off after the coronation? I feel that some do not want Zamalek to rejoice.”

He pointed out that Zamalek won the league title with the efforts of its players and their insistence on facing the difficult conditions that faced the team and changing 4 consecutive administrations to the extent that the players do not receive their financial dues and we have a clothing crisis, but everyone pledged to win the league.

He added, “The medical staff did not receive the dues to win the African Confederation in 2019, and the doctor received offers from the Emirates, Al-Ahly and Pyramids, because he is a lover of Zamalek.”

Shikabala added: “Some talk about video technology, and everyone knows what happened throughout history with Zamalek, at least in the 2010-2011 league.

He pointed out that the abuses that occurred against him occurred before against Hassan Shehata and Gamal Abdel Hamid, explaining that the talk about Zamalek receiving penalty kicks is something that was promoted by one of the people in Al-Ahly and it deserved punishment.

He indicated that he felt the decision of the league title in the Al-Masry match at the Alexandria Stadium, after goalkeeper Mohamed Awad saved two penalties.

The leader of the White Castle confirmed that the teams faced Zamalek with a high fighting spirit, and some talk about missing out on Zamalek, which is not true at all.

He added, “In one of the matches, I was surprised by one of the workers resorting to using magic in the last seven meetings of the Egyptian League, and we came out with a victory.”

He explained that the French coach, Patrice Carteron, coach of Zamalek, is an organized and calm coach, stressing that he reprimanded the latter in a session with Mohamed Abdel Shafi, the left-back, for his departure to Saudi cooperation, and explained to them the reasons.

He indicated that he will retire when he feels unable to give, explaining that he will go to training after his retirement and will go to Holland to learn Johan Cruyff Training School and obtain the necessary training licenses from there.

Shikabala praised the brilliance of right-back Hamza Mathlouthi, especially since he has been widely criticized since joining the white team, stressing that the team’s camp in Alexandria before the last rounds of the league witnessed intense focus and great effort from all players.

Shikabala fell into a fit of tears after a report shown on the channel about the opinion of Zamalek fans about his career with the white team.

The Zamalek captain, nicknamed “Apache”, continued to cry, after the report was broadcast, which dealt with the fans’ talk about Shikabala and his role with the team in winning the league title.

These were the details of the news Watch: Shikabala cries on the air for this day. We hope that we have succeeded by giving you the full details and information. To follow all our news, you can subscribe to the alerts system or to one of our different systems to provide you with all that is new.