Ronaldo is the best scorer in the history of the national... 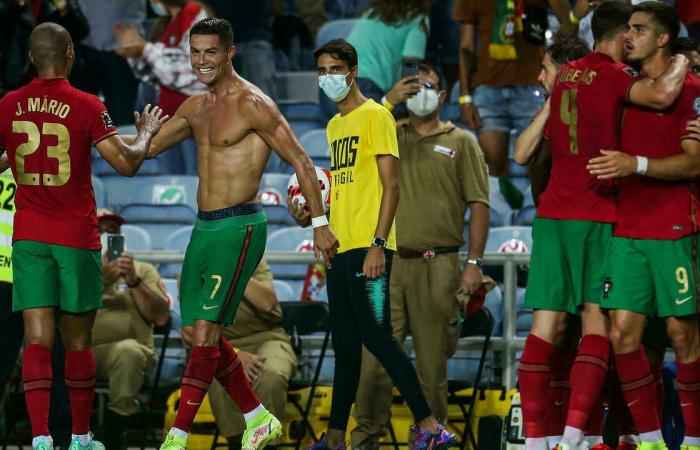 Portuguese Cristiano Ronaldo broke the record for the number of goals at the level of national teams in history after he scored his 110th goal before adding a second goal that gave his country a crazy victory at the expense of Ireland 2-1 in the World Cup qualifiers on Wednesday.

Ronaldo surpassed the previous Iranian international, Ali Daei, who was equal with him before the match with 109 goals.

Ronaldo said after the match, “I am very happy, not only because I broke the record, but for the exceptional moment we lived together.”

“I have to appreciate what the team did, we were safe until the end. I am very happy.”

Portugal is at the top of Group A with 10 points from four matches against Serbia, the second, with a difference of three points, but it has one game less.

The first place winners in each group qualify directly for the finals in Qatar, while the second place finishers go to play-offs.

– Uprising after the setback –

The night of the Don seemed difficult at first glance when the 36-year-old missed a penalty kick in the 15th minute, but he reconfirmed his high position by scoring two deadly goals that first gave Portugal a draw before turning the table on the guests with a goal in the sixth minute of stoppage time that confirmed Portugal’s victory by the end of the match.

And after Ronaldo, who returned to Manchester United recently from Italian Juventus, missed a penalty kick after a mistake by Ireland defender Jeff Hendrick on Bruno Fernandes, as confirmed by the assistant referee technique (VAR), but Ronaldo missed it after Irish goalkeeper Gavin Bazono saved it (15).

The Portuguese needed to wait for a long time in order to equalize, so Ronaldo was in the right place to follow a perfect cross from Gonçalo Guedes into the net of goalkeeper Pazono (89).

While the indications were that the two teams came out with a point, Don had another opinion, as he managed with a new header and a cross-pass for Joao to ignite the crazy joy of the Portuguese players.

The only bad thing that night for Ronaldo was that he got a yellow card for celebrating after his second goal, to miss Portugal’s next match against Azerbaijan due to suspension.

And Cristiano raised his tally of goals to three in the current qualifiers.

These were the details of the news Ronaldo is the best scorer in the history of the national... for this day. We hope that we have succeeded by giving you the full details and information. To follow all our news, you can subscribe to the alerts system or to one of our different systems to provide you with all that is new.