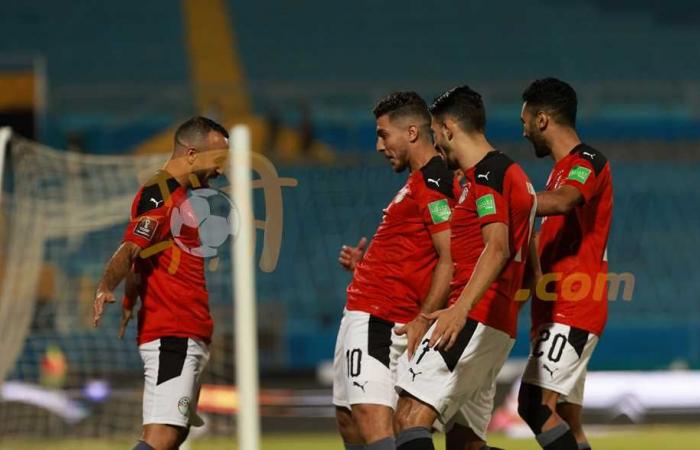 present to you FilGoal.com Live coverage of the match between Egypt and Angola, as part of the first round matches of the 2022 World Cup qualifiers.

To watch the match live from Here

The end of the match, Egypt won with a goal.

NS. 89 shot from Mohamed Sharif, which the goalkeeper tackled twice.

NS. 88 A final change for Angola with the entry of Simone Eduardo instead of Inacio Santos.

NS. 87 Longitudinal from Afsha to Muhammad Sharif, who returned it to Al-Saeed, who shot weak in the hands of the goalkeeper.

NS. 75 corner kicked by the winch with a header in the goalkeeper’s hand.

NS. 60 Ari Babel participates in place of Joao Bacchi in the ranks of Angola.

NS. 47 shot from Afsha hit the defense and almost hit the net but turned into a corner.

beginning of the second half

The end of the first half

NS. 44 Mohamed Sharif penetrates into the penalty area after a pass from Afsha and shoots over the goal.

NS. 28 shots from Freddy over the goal.

NS. 24 error from the winch and Freddy cuts and penetrates and enters the penalty area and sends a cross that is saved by Tariq Hamed.

NS. 17 Freddy skillfully passes from Fattouh and sends a cross from everyone until Baher Al-Mohammadi takes it to a corner.

NS. 14 Oooh, a ground cross from Afsha passes everyone and reaches Zizou, who shoots, but the defense intervenes at the last minute.

NS. 7 rebounds for Angola reach Fabio Abreu, who shoots next to El-Shennawy’s goal.

NS. 6 A cross from Zizou to Hussein Al-Shahat, who met her with a left touch on the side of the goal.

NS. 2 A cross from Freddy Balende to Vladimir Edison, who received the ball at the six-yard boundary and hit the side of the post a little.

start of the match

These were the details of the news FilGoal | News | The World Cup qualifiers ended... for this day. We hope that we have succeeded by giving you the full details and information. To follow all our news, you can subscribe to the alerts system or to one of our different systems to provide you with all that is new.