They call it a “golden medal” and it contains only 6... 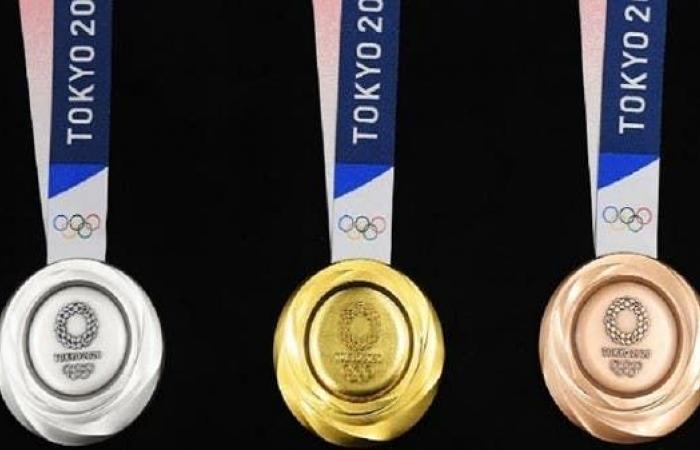 If a gold medalist at the Tokyo Olympics, or before it in any other Olympic Games, wants to sell it to Joharji, he may return with his worst plans once to get the “Nostalgia” shoes fraudulently, that is, disappointed, because they will hardly pay him $ 860 for it . Nor will he succeed in selling “silver” for more than half the price of gold. If it was bronze, he would return with his pocket what he would buy a shawarma sandwich with if he wanted, i.e. approximately $5.

One of the specifications of the Olympic medals is that the diameter of each of them is 85 millimeters, and the minimum thickness of one of them is 7.7 millimeters, while the thickest is 12.1 millimeters, according to what Al-Arabiya.net read about it on 4 world-wide sites, to ensure the information contained in it, especially the value of what It contains minerals, and even those who get it in the Olympics think that the most important of them is gold, so we see some of them biting it with their teeth when they hang it on their chest, to be sure, knowing that “sounding yellow” is softer than other minerals, and by biting it it can be verified its authenticity.

And the true value of Olympic medals of all kinds, is only intangible, because the materials they call “golden” metaphorically, came from waste and electronic equipment recycled and donated by the Japanese, according to the video presented above, in which we find that they melted it and extracted from it silver representing 92.5% of the The weight of the “gold” medal is 556 grams, in addition to only 6 grams of melted gold to be plated, while the “silver” contains 550 grams of silver.

As for the bronze, which weighs 450 grams, there is no cheap bronze in it except its color, because 95% of it is copper and 5% zinc, according to what the All About Coins website quoted Richard Gladdle, the British expert in ancient coins and medals, based on his assessments, of houses that organize famous international auctions.

Gladel stated that until 1912 they used to make medals from pure gold, “but things changed after the First World War, and they became silver and covered with a layer of gold.” Then the changes continued until they are now made of silver, zinc and copper. However, some of them are sold at auction for large sums, “not because what is in them is valuable, but because people are interested in laying hands on something very important to their Olympic champion by simply owning his gold medal,” adding that the design of the medals changes according to the desire of each country that organizes the tournament.

And whoever is looking for the most expensive Olympic medal sold at an auction in history, he will find someone who paid in 2013 more than one million and 460 thousand dollars, to buy it in an auction they organized that year in New York, and it is one of 4 golds won by American Jesse Owens at the 1936 Olympics in Berlin Hitler’s belief in the superiority of the Aryan race was shattered.

They wrote and said that the Nazi leader was hoping to get the Germans out of the tournament with the largest number of medals, so the poor lions, Jesse Owens, defeats everyone who competes with him in the 100 and 200 runs, as well as in the long jump, in addition to the “100 meters relay” in which 4 runners participate, The Fuhrer became angry and refused to shake his hand, according to the video presented above.

They wrote a huge book about the late “Owens” in 1980, a 66-year-old victim of lung cancer, for smoking a lot of cigarettes after his retirement, and about him they produced 3 movies, and described him as “the greatest 45 minutes of sports ever,” as former US President Jimmy Carter said about him. , on one occasion: “The world of sport cannot find a symbol of the human struggle against tyranny, poverty and racial intolerance like Jesse Owens.”

These were the details of the news They call it a “golden medal” and it contains only 6... for this day. We hope that we have succeeded by giving you the full details and information. To follow all our news, you can subscribe to the alerts system or to one of our different systems to provide you with all that is new.