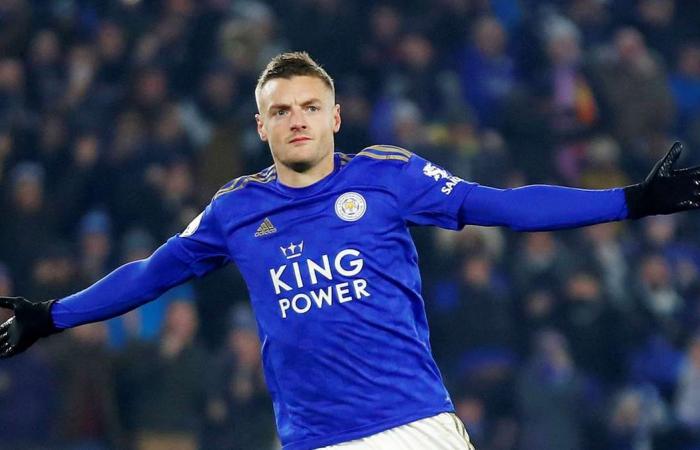 The Foxes travel to Aston Villa on Sunday looking to extend their winning run of Premier League matches to eight to maintain their hopes of a top-four finish.

Vardy's goals have helped propel Leicester to second in the table, with the former England striker scoring in each of his last seven appearances.

With nine in total in those games Vardy's tally stands at 14 for the season, and 23 overall following Rodgers' arrival in February.

It is a stunning about-turn for the 32-year-old, who struggled last season for goals under Claude Puel prior to the Frenchman's sacking.

"The huge credit is to him," insisted Rodgers. "He's an incredible talent who has all the attributes that big teams look for in their profile of a striker - fast and hard working. Through all my days, that's the profile of player I like, too.

"Coming into here, I knew he was one of best in Europe, and it was a case of giving him the confidence to show that.

"Sometimes players can get into their early 30s and be written off. But in seeing his energy and speed, it was a case of him fitting into how we wanted to work, which I felt would be fairly easy.

"And he wants to work, to run in behind, to press, so with how I like teams to play, he was a natural.

"So the huge praise goes to him, to take on board what we wanted, and then to have that consistency and hunger, and that's proven very impressive."

Rodgers singled out Villa's own special talent in captain Jack Grealish - who is earning rave reviews for his displays this season following the club's promotion to the top flight.

"I've spoken to him a little bit and he's a really good boy," said Rodgers. "He's a wonderful player who is playing the game with great maturity.

"Jack has always had that big talent, and he's a real talisman for them, someone who can make a pass and is very creative. He's a player we have to be mindful of."

Eslewhere on Sunday, Brighton & Hove Albion manager Graham Potter knows his side's win at Arsenal will count for nothing when they take on Wolves at home.

The Seagulls battled to a first away victory at one of the Premier League's "big six" on Thursday night.

Having ended a three-match losing run, Potter is determined to maintain momentum.

Wolves, though, have climbed to fifth place and are unbeaten in the league since mid-September as well as juggling a European campaign.

Potter knows one big result does not mean their work is done.

"We have played five of the big six away already, and that has been a bit of a learning experience, so now we have to apply that to the next match," he told a press conference shown on Brighton's official website.

"Wolves will not give us anything - they wont say 'oh, you won against Arsenal, so here you go'.

"We have to start again and be prepared to play against a team who are having a wonderful season."

These were the details of the news Leicester's Brendan Rodgers says Jamie Vardy showing he is one of the best striker's in Europe for this day. We hope that we have succeeded by giving you the full details and information. To follow all our news, you can subscribe to the alerts system or to one of our different systems to provide you with all that is new.