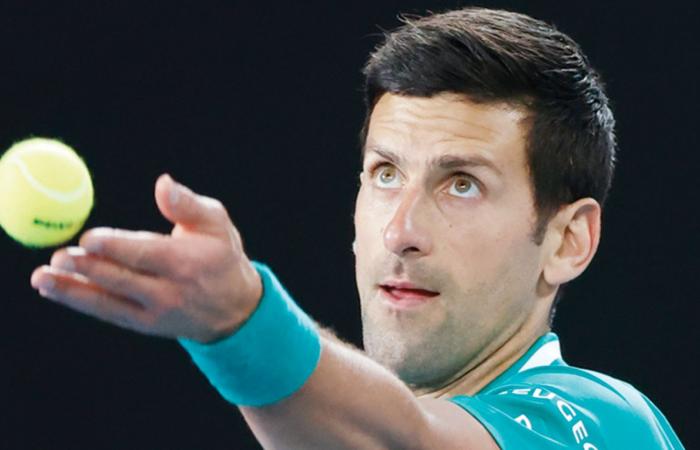 Jeddah - Yasmine El Tohamy - MELBOURNE: Novak Djokovic served a reminder of why he’s the greatest Australian Open champion in history as he demolished France’s Jeremy Chardy in straight sets in round one on Monday.

The eight-time winner’s 6-3, 6-1, 6-2 win showed that normal service had resumed at Rod Laver Arena after the year’s first Grand Slam was delayed three weeks over the coronavirus.

Serena Williams, Naomi Osaka and Simona Halep also enjoyed convincing wins as the tournament finally got underway in front of limited crowds after a troubled buildup.

“It feels great, so great to see people back in the stadium,” Djokovic said. “This is the most I’ve seen on a tennis court in 12 months.”

Form and fitness are highly unpredictable at the Australian Open after the coronavirus wiped out five months of last season and badly disrupted preparations for the first Grand Slam of 2021.

But Djokovic left little doubt about his readiness to pursue a record-extending ninth title in Melbourne, breaking in the first game and completing the victory in 91 minutes.

The Australian Open was postponed to allow players to quarantine and play warmup events, which were suspended for a day last week after a coronavirus case at a tournament hotel.

After the tortuous buildup, third seed Osaka struck the first serve on the center court against Russia’s Anastasia Pavlyuchenkova and strode just 68 minutes later as a 6-1, 6-2 winner.

“I was really nervous coming into this match. I just wanted to play well,” Osaka told a smattering of spectators on the socially distanced court.

Williams started her quest for a record-equalling 24th Grand Slam title in style with a 6-1, 6-1 romp past Germany’s Laura Siegemund in 56 minutes.

“This was a good start, it was vintage Serena,” said the 39-year-old, turning heads in a brightly colored, one-legged catsuit.

Later, the 2019 US Open champion Bianca Andreescu won an emotional first match after 15 months out against Romania’s Mihaela Buzarnescu 6-2, 4-6, 6-3.

The 20-year-old Canadian last played at the WTA Finals in October 2019 at Shenzen, China, where she suffered the knee injury that scuppered her entire 2020 season.

But Angelique Kerber, the 2016 Australian Open winner, was the first significant casualty of the women’s championship when the 23rd-seeded German lost 6-0, 6-4 to 63rd-ranked American Bernarda Pera.

The tournament known as the “Happy Slam” for its relaxed atmosphere has taken on a different appearance this year with fewer spectators, mandatory mask-wearing and fans unable to circulate freely around the grounds.

It’s the fourth Grand Slam tournament affected by the coronavirus after last year’s Wimbledon was canceled, the French Open was postponed and the US Open was held behind closed doors.

In the men’s draw, US Open champion Dominic Thiem was made to work hard in the first set by Kazakh veteran Mikhail Kukushkin before coming through 7-6 (7/2), 6-2, 6-3.

“He played incredible,” said the German, who lost to Thiem in the final in New York and the Melbourne semifinals last year.

“He had me on the ropes, particularly in the second set tie-break.”

Australia’s Nick Kyrgios scored a point with a tweener as he beat Portuguese qualifier Frederico Ferreira Silva in straight sets.

Milos Raonic, the 14th seed from Canada, also enjoyed serene progress through to the second round with a 6-3, 6-3, 6-2 win over Federico Coria of Argentina.

Bulgaria’s Grigor Dimitrov got through in three sets against Croatia’s Marin Clic, the 2014 US Open champion.

Japan’s Kei Nishikori also fell at the first hurdle with a straight-sets defeat to Pablo Carreno Busta of Spain.

These were the details of the news Djokovic imperious as COVID-delayed Australian Open finally underway for this day. We hope that we have succeeded by giving you the full details and information. To follow all our news, you can subscribe to the alerts system or to one of our different systems to provide you with all that is new.