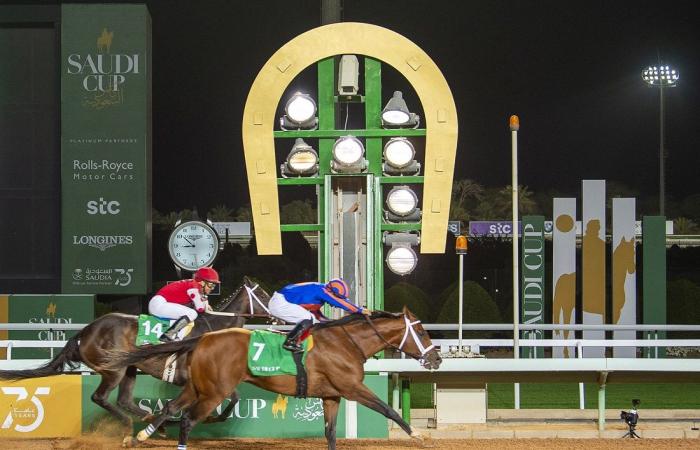 Jeddah - Yasmine El Tohamy - DUBAI: Few jockeys competing at the second running of the Saudi Cup this month will have quite the back story of Wigberto “Wiggy” Ramos.

From racing in the United States, the Panamanian moved to Saudi Arabia in 1998 to ride for Prince Faisal bin Khaled, and has since claimed close to 600 career victories.

Now he is eyeing what would be the ultimate victory on Feb. 20.

With the total prize money of $30.5 million, the Saudi Cup is the world’s richest horse race with some of the best jockeys from around the world set to take part again this year.

Last year, a wrist injury meant that the 51-year-old missed out on taking part in the International Jockey’s Challenge the day before the inaugural Saudi Cup.

Here Ramos talks about the giant strides that horseracing has taken since his arrival in the Kingdom, and gives his thoughts on the dirt and turf tracks at King Abdulaziz Racecourse, as well as his horseracing dreams.

What do you most like about the two surfaces we have here at the King Abdulaziz Racecourse – the dirt and the turf?

The dirt track at King Abdulaziz Racecourse is very good, and I think it’s one of the best tracks I’ve ever ridden on. I haven’t raced on the turf track yet, but I have ridden on other turf tracks around the world, such as in France and America. Last year, I saw a couple of the Saudi Cup races on the turf, but only as a spectator, as I was unable to ride due to a wrist injury, but I thought the turf track looked very nice and classy.

How much has horseracing changed in Saudi Arabia since you came here in 1998 to ride for Prince Faisal bin Khaled?

It’s changed a lot over the years. The racecourses, the quality of the tracks, the jockeys and the level of their riding, and the standard of the horses competing, everything has improved hugely. It’s a very exciting time for horseracing in Saudi Arabia right now.

How does race riding compare here to the riding in the United States?

Racing in Saudi Arabia is very different to the USA. In the USA, they race very fast, and it’s very tough. Over here, you have to take your time and be patient, as there are 20 horses in almost every race. So far, the stewards have been doing a very good job.

What has been your biggest career highlight in Saudi Arabia so far?

That is a tough question, as I’ve been lucky enough to ride good horses since I started winning Group 1 races. Right now, I think it has to be a horse called Aereeb Alsseet that I am currently riding from the Alshareef Hazzaa Shaker Alabdali stables, he’s a very tough horse.

Would it be your dream to win The Saudi Cup?

That is my goal right now, because I’ve been riding here for nearly 23 years, and I’m close to retiring, so to win The Saudi Cup would be a really great way to finish my career.

If you could ride any horse, from anywhere in the world, who would it be?

There are a couple of horses that have retired, who would have been incredible to ride. I always dreamed of riding Enable, the record-breaking mare that Frankie Dettori rode, that would have been amazing.

These were the details of the news Wigberto “Wiggy” Ramos eyeing Saudi Cup glory after 23 years of racing in the Kingdom for this day. We hope that we have succeeded by giving you the full details and information. To follow all our news, you can subscribe to the alerts system or to one of our different systems to provide you with all that is new.