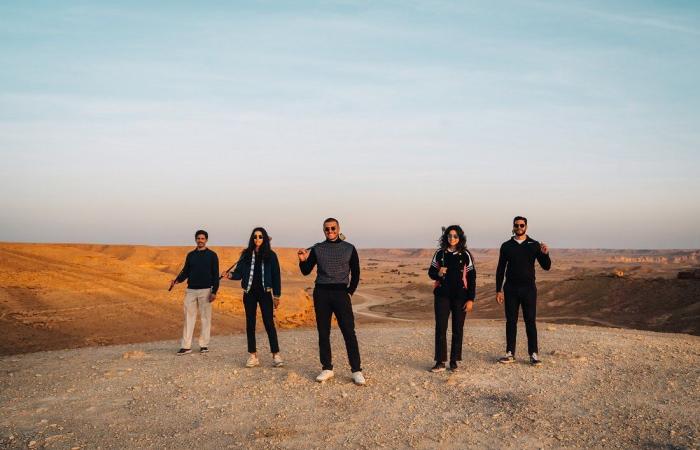 When Saudi Arabian golfer Faisal Salhab tees-off on Thursday in the third annual Saudi International powered by SoftBank Investment Advisers, he will for the second year running, be living a childhood dream of facing off against the world’s best golfing talent.

However, the future memories the 24-year-old will bank at King Abdullah Economic City’s Royal Greens Golf & Country Club once again this year will have stiff competition from sources a lot closer to home.

That’s what happens when you are part of arguably Saudi’s first golf-mad family.

“Our whole family took up golf at the same time,” Salhab said.

“I was really young, but from what I can remember my dad took it up sometime around 25 years ago. He’d play with my brother and sisters and despite being the youngest, I would always want to go and play too.”

Salhab’s fondest memories come from the endless hours he spent driving and putting with his four siblings Saud, Najwah, Sarah and Saif, and his parents, Salah and Shafia.

“We’ve played golf together ever since,” Faisal Salhab adds.

“With the pandemic we couldn’t play that much in the last year, but as soon as courses started to reopen, we were out again. Saud and I drove 90 minutes six days in a row just to get to the golf course and play.”

“And as a family we’ve started playing a lot more these last few months again. It’s fun and everyone is getting better, so I can’t wait to keep making these memories.”

All seven members of the Salhab family, who originate from Riyadh, are golfers, with Faisal and sister Sarah both having featured in two of the Kingdom’s major international tournaments: the Saudi International powered by SoftBank Investment Advisers, and the Saudi Ladies Team International.

“I remember as a young child we’d just all go to the driving range together and learn to play,” Faisal’s brother Saud said.

“We all started young but Faisal started the youngest out of all of us. When he was two or three he was hitting the ball. We still have videos of that.”

The family’s earliest golfing memories came on foreign courses, during summer vacations in Switzerland and other European countries. At that time, golf had little presence within the Kingdom.

Over the last decade, however, things have changed rapidly. Saudi Arabia is now home to more than 10 world class golf courses and there is a marked increase in participation across the country.

Part of the Desert Swing, the Saudi International is already attracting some of the world’s top golfers, while last year’s addition of the Aramco Saudi Ladies International presented by Public Investment Fund – and its sister event the Saudi Ladies Team International – was considered a watershed moment for women’s golf in the country.

Faisal’s sister Sarah, who in the women’s event in November, attributes her growing stature as a golfer to the love the whole family share for the game.

“We enjoy playing golf together as a family,” said Sarah. “Some of our best memories are playing together out on the course. It’s such a great bonding experience, and great competition.”

There’s more to the family affair. When Sarah competed in the Saudi Ladies Team International, here caddy was her sister Najwah. On Thursday, the pair will join the rest of the family as they cheer Faisal on from the sidelines.

“It’s a joy seeing both my younger siblings doing great and doing it at the highest level,” said Saud.

“It’s inspiring, I hope they can inspire others the way they inspire me, and I’m really just overjoyed when I see them play. I believe in them.”

Faisal says he has never felt more confident in his ability than he does now, heading into his second appearance at the $3.5million tournament.

“I am very excited to be playing in the Saudi International again,” he said. “I feel like this year I’m more ready. Last year was the first time I played and the nerves were there, playing against the best players in the world. It’s exciting to go back and now see what I can do after understanding what I had to work on after last year. Hopefully I can do better this year. Hopefully I can do something.”

“I’ve just learned to trust my game and trust myself, and this year I hopefully won’t have too many things going on in my head, so if anything, I’m more excited to play this year than I was last year. I feel like I’m ready.”

The Saudi International powered by SoftBank Investment Advisers starts this Thursday, Feb. 4, and runs until Sunday, Feb. 7, with all the action broadcast live on KSA Sports.

These were the details of the news Golf-mad family proudly backing gifted Faisal Salhab at Saudi International for this day. We hope that we have succeeded by giving you the full details and information. To follow all our news, you can subscribe to the alerts system or to one of our different systems to provide you with all that is new.