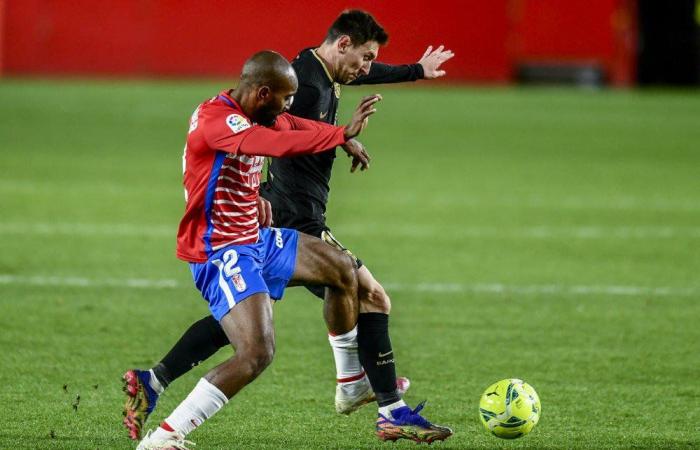 Jeddah - Yasmine El Tohamy - MADRID: Lionel Messi is back in form and Barcelona are finding their feet after a 4-0 demolition of Granada on Saturday put them within four points of the top of La Liga.
Messi scored twice to make it four goals in three matches since the turn of the year and his resurgence has coincided with an upturn for the team too, this victory Barca’s third on the bounce.
It puts them in sight of league leaders Atletico Madrid, even if Diego Simeone’s side now have three games in hand.
Atletico’s match against Athletic Bilbao earlier on Saturday was postponed due to the snowstorm that has engulfed Spain this weekend.
Messi’s double, the second a sweetly-struck free-kick, came between two strikes from Antoine Griezmann, who is also enjoying a revival after a disappointing 18 months at Camp Nou.
Some had wondered if Messi would ever get back to his best following an underwhelming start to the season but his latest contribution makes him the league’s top scorer on 11 goals.
After attempting to leave Barcelona last summer, the 33-year-old’s recovery always felt dependent on him rediscovering his own motivation and focus.
But Barca coach Ronald Koeman deserves credit for the rejuvenation of players like Griezmann, Ousmane Dembele and Frenkie de Jong, all of whom have improved significantly in recent matches.
Barcelona’s recovery has a long way to run, with unresolved issues on and off the pitch very likely to resurface before the end of the season.
Yet Koeman will hope a corner has been turned and at a good time, with the Champions League last 16 tie against Paris Saint-Germain to come next month and a large chunk of the league calendar still remaining.
Barca’s first goal was fortunate, with Roberto Soldado seemingly surprised to have the ball passed at him by Sergio Busquets. Soldado’s lashed clearance saw the ball sliced backwards to Griezmann, who touched and shot past Rui Silva.
Griezmann was the instigator for the second goal too, the Frenchman driving forward to the edge of the area before transferring inside to Messi. Messi was given the yard he needed to shift onto his left foot and curl home.
Messi made it three from a similar position, just on the edge of the box, this time the ball was stationary.
Pedri had been prevented from running into the box and Messi fired the resulting free-kick low, perfectly into the corner.
Griezmann made it four, firing in a scooped pass from Dembele on the turn. Messi went off with almost half an hour left, his work already done.
Atletico’s game at home to Athletic Bilbao was called off, with the snowfall in Madrid on Friday the heaviest since 1971.
Bilbao’s players were unable to land in the city and returned to Bilbao early on Friday evening.
Seville was among the areas spared the awful weather conditions, with Sevilla able to play against Real Sociedad

En-Neysi hat trick
Youssef En-Nesyri scored a hat trick for Sevilla to beat Real Sociedad 3-2 in a thriller that featured four goals in the opening quarter of an hour.
Sevilla drew level on points in the standings with Real Sociedad, which was ahead on goal difference in fifth place. Sevilla, in sixth, also has three games in hand.
En-Nesyri opened the scoring in the fourth minute from a pass by Fernando.
Just one minute later, an own goal by Sevilla's Diego Carlos came when he attempted to knock the ball away from Aleksander Isak.
While his first goal was a simple tap into an open net, En-Nesyri's second goal in the seventh minute was a work of beauty. The Morocco striker dribbled past three defenders before beating the Sociedad goalkeeper with a low strike.
Isak made it 2-2 in the 14th from a corner kick that reached him unmarked at the far post. But En-Nesyri netted the winner in the 46th after firing in a low cross by Lucas Ocampos.
Sevilla defender Jules Kounde cleared a header by Mikel Merino in the second half to ensure the three points.
En-Nesyri leads Sevilla with 12 goals in all competitions this season.
“This could be the best game (of my career)," En-Nesyri said after his second career hat trick in Spain. “When you get those chances, you have to make the most of them and finish them off."

These were the details of the news Messi revival continues as Barca thrash Granada for this day. We hope that we have succeeded by giving you the full details and information. To follow all our news, you can subscribe to the alerts system or to one of our different systems to provide you with all that is new.