Dynamo Kiev: Stéphanie Frappart, a good referee in the match 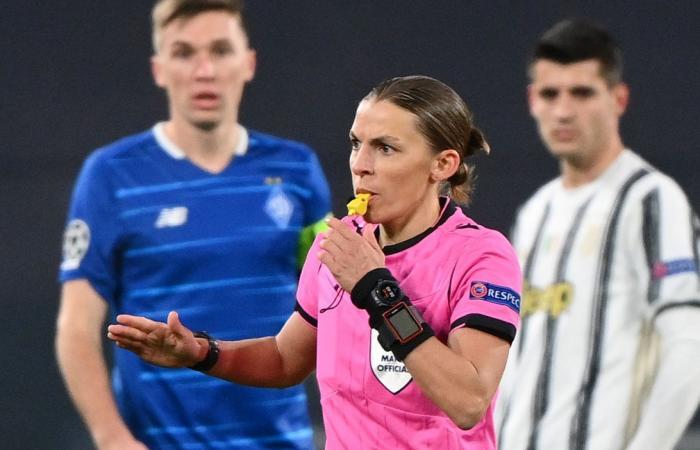 Even the Turin captain Bonucci was entitled to reprimands. Stephanie Frappart, the first woman to referee a Champions League game on Wednesday, did not have the trembling whistle to lead a fairly decent game between Juventus and Dynamo Kiev.

After ten minutes of play, the first foul whistled was accompanied by a first yellow card, addressed to Uruguayan midfielder Juventus Rodrigo Bentancur for a late tackle on Ukrainian No.10 Mykola Shaparenko. And everyone understood that this premiere evening would not be that of gifts.

The 36-year-old French referee immediately rose to the mark for his first in the most prestigious of club competitions, having notably led the August 2019 European Supercup between Liverpool and Chelsea and two international matches. ‘Europa League in October and November.

Present from the start of the match, with the same concentrated gaze that she had when entering the field an hour before kick-off, with a ball in hand, surrounded by her assistants, only men.

But also a diplomat, one of her great qualities say those she has refereed, frequently discussing with the players, as with the captain White black Bonucci whom she calls to order after a foul (24 ‘).

Shortly after, the Frenchwoman released her second yellow – more severe than the first – for the Ukrainian Zabarnyi (27 ‘) for an arm in the face of Morata.

But this match is generally good, with few faults, between a team already qualified and quickly in the lead, Juventus, and another having only the third place synonymous with the Europa League to hope for during the lowering. curtain in a week.

There is a little tension when Morata claims a penalty that Stéphanie Frappart does not grant, rightly (29 ‘). Same decision a few moments later after a collision this time in the Turin area, between Bonucci and Benjamin Verbic.

The cameras are again on the referee in the second half when Cristiano Ronaldo scores the second goal (57 ‘), taking advantage of an action from Morata just in front of the keeper. Offside, fault of the Spaniard? A few seconds of suspense, a slightly tense face, and the goal is awarded to the top scorer in the history of the competition.

In an end to the match largely dominated by Juventus, the faults are more Ukrainian and the referee is forced to release his third and last yellow for Shaparenko.

She could whistle her last whistle with confidence and send everyone back to the locker room. The exam is brilliantly passed.

These were the details of the news Dynamo Kiev: Stéphanie Frappart, a good referee in the match for this day. We hope that we have succeeded by giving you the full details and information. To follow all our news, you can subscribe to the alerts system or to one of our different systems to provide you with all that is new.