Exclusive: 'Liverpool for sure have the best team in the world' - Flamengo star Filipe Luis on Club World Cup final 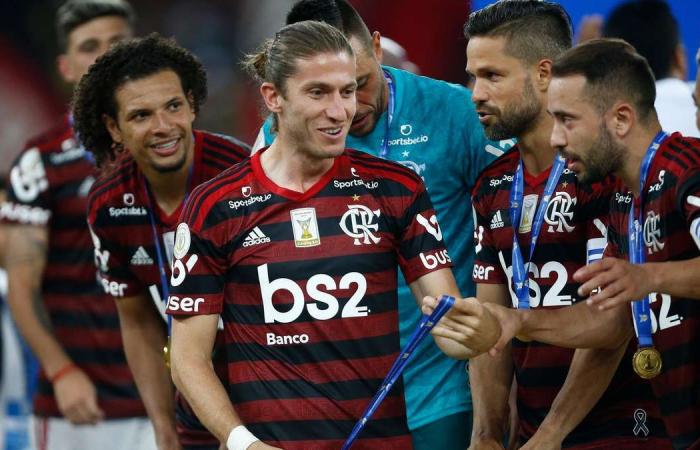 Thank you for your reading and interest in the news Exclusive: 'Liverpool for sure have the best team in the world' - Flamengo star Filipe Luis on Club World Cup final and now with details

Hind Al Soulia - Riyadh - Even after a month (and a career) to remember, Filipe Luis wants more.

There was the Copa Libertadores victory, when Flamengo defeated River Plate in a pulsating final in Peru, striking twice in the dying moments to end a 38-year wait for South America’s premier club prize.

Hours later, as the team returned home to celebrate with the hundreds of thousands on the streets of Rio de Janeiro, Flamengo sealed the Brazil championship, as well.

Gremio defeated Palmeiras, also in injury-time, and Flamengo had a first Serie A success in a decade. Not since Pele’s Santos in 1963 had a team captured the domestic and continental trophies in the same year.

Yet Flamengo have vowed not rest on their laurels. On Saturday, they contest the Fifa Club World Cup final, against Liverpool in Doha.

Certainly, the past few weeks have been unforgettable. But, as the vastly experienced Luiz stresses, Flamengo are intent only on adding to them.

“The Club World Cup is a totally new competition,” the former Atletico Madrid and Chelsea full-back told The National. “The Copa Libertadores and the Brazilian league give us a lot of confidence to play and to be here, but we just forget everything we did this season. Now we reached the final we want to win.

“We know Liverpool are totally the favourite, but we know in football that anything can happen and it’s possible to win. So we feel good, that we’re going to have chances.

“We have to do this perfect game, but we have to keep the emotions inside and just try to play our best football to win.”

On Tuesday, Flamengo were far from their finest in the first half of their semi-final against Asian champions Al Hilal, but they rebounded from a goal down to prevail 3-1.

It secured the clash with Liverpool, a repeat of the 1981 Intercontinental Cup showpiece in Japan, when Flamengo defeated the European champions 3-0 and ensured to this day their fans still sing long and loud about it.

Luis, though, understands past performances will have little bearing come Saturday.

“Everybody knows that Flamengo played against Liverpool in 1981, but it’s a new game, a new tournament, new players; everything is new,” he says. “We just want to win the title; we don’t have to think it’s Liverpool or anything else.

“But, of course, Liverpool is the best team, who everybody wants to beat. Even if they play against Barcelona or Real Madrid they’re going to be favourites. But in the game, 90 minutes, anything can happen.”

At the Khalifa International Stadium, Luis is most looking forward to facing goalkeeper Alisson – “he is one of my best friends in my life” – when for 90 minutes or more the pair will put their relationship aside to "become enemies … only on the pitch".

In fact, Luis will look across at the Liverpool line-up and see other familiar faces. Not just Alisson, but another compatriot in Roberto Firmino. Mohamed Salah, meanwhile, is a friend from their brief spell together at Chelsea.

“I played four games against Liverpool when I was with Chelsea: two in the league and two in the League Cup,” Luis says. “And I never lost.

“They played together for three years now; they are more and more solid. They love their manager; they love their city, their club. We can feel that they are happy inside the pitch.

“I have good memories in the games against Liverpool, but it’s always, always a difficult game because they give everything on the pitch.”

At age 34, Luis remains committed to offering all he has. He is a Flamengo fan almost from birth, this summer eschewing another few seasons in Europe to move back to Brazil.

He has won La Liga, the Premier League, the Europa League; the Copa America with Brazil. He has twice finished runners-up in the Uefa Champions League. But the Club World Cup holds special resonance.

“It’s a huge tournament and not many players have the opportunity to play in it,” Luiz says. “For me, I feel lucky to be here and to play this tournament with my team, the team I supported when I was a kid. When I watched from television as a kid I saw some big moments.

The determination, the drive that has prolonged an already 16-year professional career, is evident.

“I lost two Champions League finals, but I also won two Europa League finals and a lot of other titles,” Luis says. “Every tournament, every trophy is different, feels different, gives a different feeling, different teammates each year.

“And I just feel lucky, in every club I played I won a title and made a little bit of history. Atletico Madrid and Chelsea, now Flamengo. And my ambition keeps growing and I want to keep winning titles.

"This is difficult because I never rest, I just want more. But at the same time it keeps me alive and focused on what I’m doing.”

He would live for a few more moments like the Libertadores final just past, played against one of Argentine's great clubs and at Peru's cacophonous Estadio Monumental.

Also, the parade that greeted the players back home following the now-famous 2-1 win.

“The Libertadores final was unbelievable – the atmosphere was one of the best I experienced in my life,” Luis says. “But, for sure, 100 per cent the best experience I ever had was the celebration after the title.

“After 38 years we saw one million people in the streets in Rio celebrating. It was really unbelievable, maybe the happiest moment in my career. I feel so lucky to be here, and be part of this team and the history of this club.”

“Success for me and my club? If you win this title it would for sure put our name in the history of the club, put another star on the t-shirt and be in the hearts of the supporters for the rest of our lives,” he says.

“We know how important this tournament is for all our supporters, and we know that it’s a huge opportunity for us and we are more prepared than ever to play this tournament. To succeed here, to win this trophy, would be eternal for Flamengo.”

These were the details of the news Exclusive: 'Liverpool for sure have the best team in the world' - Flamengo star Filipe Luis on Club World Cup final for this day. We hope that we have succeeded by giving you the full details and information. To follow all our news, you can subscribe to the alerts system or to one of our different systems to provide you with all that is new.