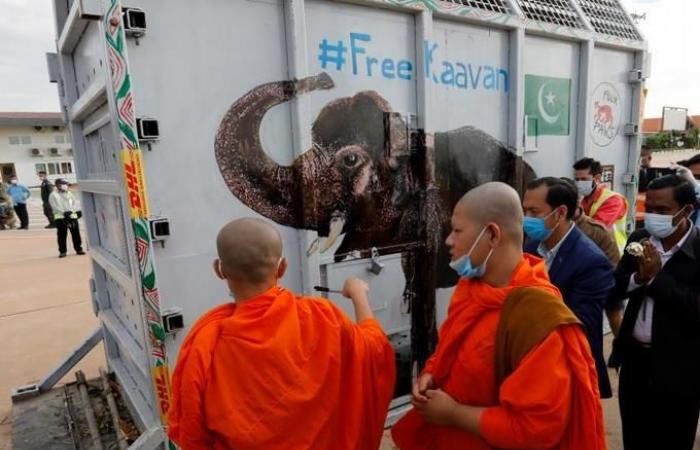 The Kaavan elephant, known as the loneliest in the world after living 35 years in isolation in a Pakistan zoo, arrived in Cambodia on Monday, where he will spend the rest of his life in a sanctuary after a campaign led by the American actress Cher, received today at the airport.

The 37-year-old and almost five-ton pachyderm traveled the almost 4,000 kilometers that separate Islamabad airport from Siem Reap, the Cambodian city closest to the Kulen Prom Tep sanctuary, in which it will be introduced and where it will live with hundreds of elephants and wild animals

Upon arrival, a group of operators assisted by ropes got out of the container of the Russian cargo plane in which they made the trip, with a stop in Delhi to refuel.

The American actress and singer Cher, dressed in a black mask and a welcome sign, waited for the pachyderm with local authorities and attended the blessing that Buddhist monks made of the container.

“We have counted the days and dreamed of this moment for a long time and finally seeing Kaavan outside the zoo will be a memory that will always remain with us,” said the singer in a statement on Sunday, who spent the last days in the Pakistani capital together with his organization Free the Wild, before flying to Cambodia.

At first, Kaavan will live alone in quarantine and when he is ready to socialize he will be allowed to join other elephants in the wild within the nature reserve.

As the Cambodian Ministry of the Environment indicated today, when he feels comfortable in a controlled environment, Kaavan will be released into the sanctuary, where about 600 Asian elephants live.

The title of loneliest elephant in the world was given to him by animal groups, which, driven by Cher, had been demanding for years a better home than the decrepit Pakistani zoo where he was alone since his companion Saheli died in 2012.

The loneliness and harsh conditions in which he has lived have been undermining his health and he suffered from overweight, malnutrition and mental problems.

Those in charge of Four Paws International, which handled the transfer of the pachyderm, and Free the Wild activists hope that these ailments will improve when it is integrated into the Kulen Prom Tep reserve.

Located in northern Cambodia near the Thai border, Kulen Prom Tep is one of Cambodia’s most biodiverse nature reserves and has survived the deforestation the country has suffered in recent decades.

A DESTINATION IN THE AIR

Kaavan’s fate has been in the air for years. In 2016, the Pakistani Parliament recommended that the elephant, an official gift from the Government of Sri Lanka in 1985, be released in a sanctuary due to its poor condition, good intentions that came to nothing.

But animal rights activists launched a campaign for the release of the pachyderm, which ultimately ended with success.

The life expectancy of an Asian elephant exceeds 50 years, although according to a study in the journal Science in 2008, those in captivity tend to have shorter lives.

These were the details of the news The “loneliest elephant in the world” arrives at his new home in Cambodia for this day. We hope that we have succeeded by giving you the full details and information. To follow all our news, you can subscribe to the alerts system or to one of our different systems to provide you with all that is new.