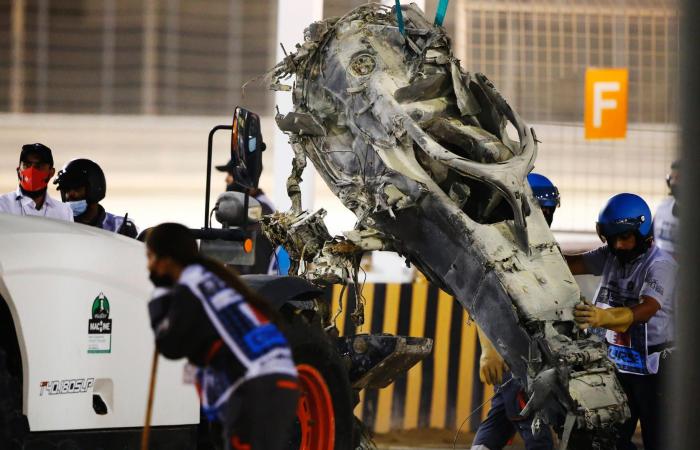 As if by a miracle, Grosjean came out of his burning car almost unscathed. Part of the reason for this: the Halo system on the racing car. t-online explains the lifesaver.

An emotional message best describes the disaster that was avoided by a hair’s breadth when Romain Grosjean crashed during Sunday’s Bahrain Grand Prix. The French motorsport journalist Julien Febreau – a close friend of Grosjean – could hardly suppress his tears on live TV on French television when he read the message from Christine Bianchi, Jules Bianchi’s mother: “You have the halo after the My son’s accident introduced, and the halo saved Romain’s life today. I’m glad he’s okay. ”

Bianchi was on a wet track at the Japanese Grand Prix in Suzuka in 2014, crashing his Marussia car into a recovery vehicle that was parked on the side of the track. Nine months later, the Frenchman died of serious injuries at the age of just 25. To date, the last death in the premier class.

It is actually thanks to the Halo system that it stayed that way in Bahrain. “15 or 20 years ago, such an accident would have turned out differently,” said “Sky” expert Ralf Schumacher, former racing driver and now TV presenter Karun Chandhok, underpinned by the pay TV station: “The Halo saved Romain without he wouldn’t be here anymore. ”

What is the Halo System?

The “halo” is the bracket that runs around the driver’s head and is connected to the chassis at three points – hence the translation “halo”. Official name: “Secondary Roll Structure”. The bracket is made of titanium, weighs nine kilograms and, according to standard 8869-2018 of the International Automobile Federation (Fia), has to withstand loads of up to 12.5 tons.

Who builds the Halo system?

It is officially prescribed that the racing teams do not manufacture the titanium bars themselves, but rather three external manufacturers, the dimensions are always exactly the same.

How long has the Halo existed in Formula 1?

The system was presented in October 2015 and after long tests it was introduced in the premier class for the 2018 season. Curious: the majority of the drivers originally spoke out against it – for visual reasons, but also because of concerns that there could be difficulties in getting out of the car in the event of rollover or fire.

And: The system was already able to stand out in 2018 when it protected the then Alfa Romeo driver Charles Leclerc from Fernando Alonso, who had lifted off after a collision, landing directly on his head with his Williams.

These were the details of the news This “halo” saved Romain Grosjean’s life for this day. We hope that we have succeeded by giving you the full details and information. To follow all our news, you can subscribe to the alerts system or to one of our different systems to provide you with all that is new.