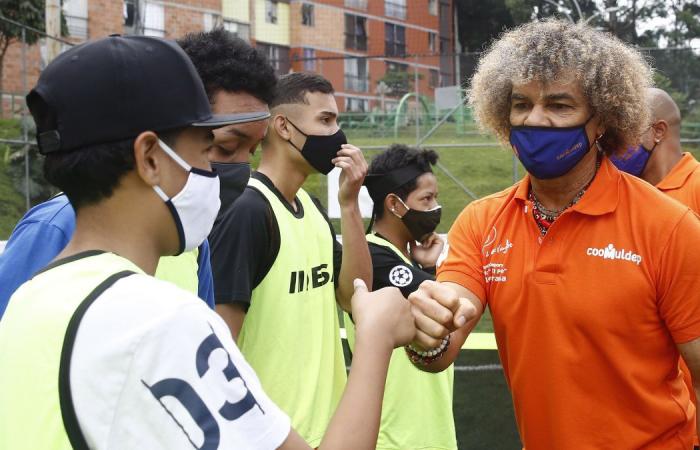 “Artists never leave.” With that phrase, Carlos Alberto Valderrama synthesized his feelings regarding the death of Diego Maradona, a player he admired, whom he considered his friend and with whom he shared special chapters that today it hurts to remember, despite considering that he remains alive because of his genius.

“I take his death with pain because of the friendship I had with Diego throughout his life. They gave me a key phrase: ‘Artists never leave.’ (They) will always stay. Diego Maradona is never going to leave. We are hurt“said El Pibe, who took advantage of his participation in an event in Sabaneta (Antioquia) to send a message of condolence to the Pelusa family and to all of Argentina.

Between nostalgia and gratitude, the samarium moved when talking about the relationship that was established from 10 to 10, which was marked by “words of admiration and respect.”

Among those memories he keeps of Diego are in a privileged place the friendly commitments who played when each closed their history as a professional footballer.

“He invited me to his farewell party, and I invited him to mine. He couldn’t play due to physical problems, but he made the effort to come. I always thanked him because he told me that he would be accompanying me and he did not miss it “, said the historical captain of the Colombian National Team.

El Mono was the most fanatic of Maradona. He followed in his footsteps from the beginning and kept the bond when his quality of legends He made them come across the World Cup or a Copa América on any stage as a witness and in the role of commentators.

According to Valderrama, the fascination for the gaucho began “since I was 16 or 17 years old, when I started watching him in Argentinos Juniors and later in Argentina in Paysandú (Uruguay). I always admired him. “

Later, already in the most peaceful moment of their lives they met again in tribute games and public events, in which they strengthened their friendship and mutual veneration, despite being rivals for years when they were the drivers and captains of their respective teams.

“It was always nice (to see him). He showed me affection, as I always showed him for everything he did in football. He was a monster, an alien, he was from another planet … but he left us,” he said.

El Pibe revealed that he has a collection of ten videos of the Argentine star and a photograph with him. In addition, it preserves a piece that any collector would yearn for: “I have the last shirt too, when he makes his farewell. I wear it when I train (…) These are things that hurt right now.”

The Diego of the people

Valderrama, who participated in the minute of silence in tribute to Pelusa, during the event that featured him by sharing with children and young people, also evoked what produced the 5-0 and the famous applause that the most Argentine of all released from the tribune after the Colombian task.

“I saw it on television. That was an acknowledgment that we Diego did because in Argentina they recognize the good game“he commented.

Another image of the crack that he has in mind shows a child on a sand court in his neighborhood and contains a statement that impacts as much as his talent.

“I was impressed when he said he wanted to go to the world championship and be a champion. He was twelve years old and he already knew what he wanted to be, “said El Pibe, adding about ‘D10S’ that he always “He spoke and defended his country, that’s why the people love him very much.”

These were the details of the news Pibe Valderrama: “I’m hurt, but Maradona is never going to leave” for this day. We hope that we have succeeded by giving you the full details and information. To follow all our news, you can subscribe to the alerts system or to one of our different systems to provide you with all that is new.