When Dua Lipa broke the news, both she and her fandom didn’t know how to react. After several attempts, the situation of pandemic managed to paralyze his tour again, and with it any macro-event that the singer could plan in the short term. However, beyond giving up, Dua knew how to gain ground to his circumstances with a new concept: Studio 2054.

Announced more as an experience than a concert, The singer has been building the hype for her entire fandom with guest announcements and clues about what this mysterious online event would be like. A month later, her fans could see what the artist has been preparing with so much determination, and at the click of a button!

The Londoner and her team have taken care of all kinds of details, from the choreography to the stage, with a set of the most elaborate in which some high numbers were already foreseen. The most loyal fans have been able to see how Studio 2054 It has been forming over a month before the singer began to sing, until the moment of truth has come.

Dua Lipa’s first steps towards the microphone have been shaped as a declaration of intent towards what Studio 2054 was going to be for its audience. Radiant as usual, the singer crossed the makeshift dance floor in a halter neck bodysuit with rhinestones and dramatic fringes as a skirt, in a seventies look that follows the current of the theme with which he has opened the show: Future Nostalgia. The pop-record that he has managed to capture in his latest album has finally been materialized in the recreation of a party that could well be the one we would have had if the pandemic had not taken them away from our plans.

Stepping back to her band, and joining her corps de ballet, the artist began with Levitating -special mention to the impressive guitar solo on the bridge of the song- finally starting the most pop part of the concert. After that, Pretty Please confirms that Studio 2054 is everything the Future Nostalgia Tour could have been – and will surely be on its new dates. With the most sensual dances, his first costume change has been a respite after not stopping for a second in three straight performances.

Back in the ring, the singer did not hesitate to raise the stakes with glitter and dared with a silver bodysuit with a draped neckline, which stood out with the neon lights through which she crossed while listening to the start of her explosive Break My Heart. An amalgam of fluorine colors already anticipated one of the numbers of the night, just as expected of one of the most successful singles of his career. However, at the end, he has proposed to eclipse it with another of the most popular songs of this last era, and after a request to the DJ, the singer has been willing to give everything with his Physical. Then, among dancers on skates, the singer said goodbye to her latest repertoire with Cool dodging his dancers, this time skating around the studio.

Demonstrating the energy that characterizes her, the artist went backstage to sing her most beloved hit – and perhaps with more moral -: New Rules. Singing one of his most representative hits, it could only indicate that the show was about to move on to one of its best moments …

The (TV) guests: From the hypnotic FKA Twigs to the living legend of ‘Rocketman’

In the middle of a break, the cameras have turned to the sensual pole-dance of FKA Twigs, which opened the ban on guests that Lipa has been promising on social networks. After wowing his entire virtual audience, The singer sat down to share with the world unpublished images of the explicit video clip that she just took with Miley Cyrus, Prisoner.

However, neither FKA nor Miley have been the only guests of the night. Although many were expected the kings of the Latino Gang dropped by Studio 2054, when the melody of One Day it started to sound It was discovered that both Bad Bunny and J Balvin would only sing their respective parts of the song from a props television, in the purest 2020 style. Of course, sure that many this has not prevented them from dancing to the rhythm of the song of Tainy.

Dressed for the occasion in a colorful Versace bustier top with marine décor, she would get up from the room recreated for that concert set to continue dancing. When it seemed that the matter of in-person guests was impossible, Angèle joined her recent Fever, making it clear that the chemistry that unites them goes beyond any video clip. After walking with the Belgian around the studio, returns to the DJ booth to sing one of his most famous collaborations: One Kiss, con Calvin Harris.

At the end of the dance song, suddenly a “follower” came up from the audience to greet her. However, when the blonde hair that rose with Dua was revealed as the very Kylie Minogue, the music has stopped to give rise to Real Groove, one of the most beloved tracks of DISCO, the last album of the Australian. In two voices, they dared to link with the well-known Electricity, I love you.

And stopped the show. With everything turned off, a large screen let out some piano chords that happened to be the only protagonists of the streaming. Elton John came to Studio 2054 to perform his mythical Rocketman, thus fulfilling – albeit telematically – the artist’s invitation to be part of this new project.

Dressed in a beautiful jumpsuit, she sings Hallucinate, with the most impressive choreography of the night. The last notes of Don’t Start Now remixed with Madonna’s Hung Up said goodbye to what may have been one of the most important in Dua Lipa’s life.

These were the details of the news Dua Lipa breaks the Internet with ‘Studio 2054’: A virtual concert that has exceeded any fan expectations | Music for this day. We hope that we have succeeded by giving you the full details and information. To follow all our news, you can subscribe to the alerts system or to one of our different systems to provide you with all that is new.

Exatlon in mourning, a member of the competition dies. 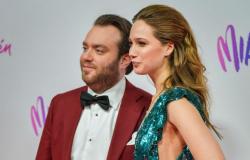