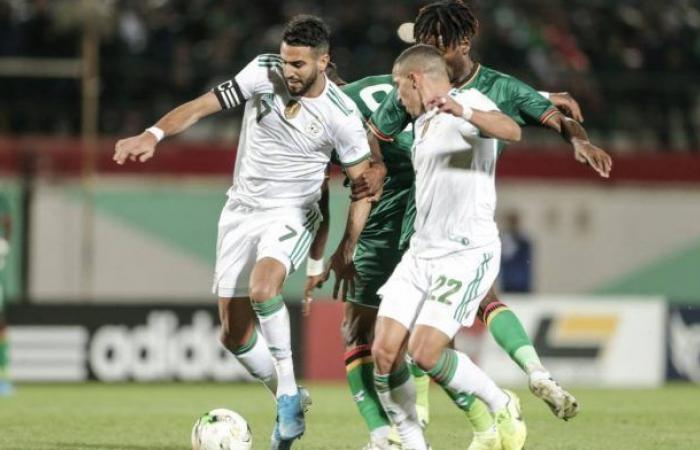 END OF THE MATCH

It’s over in Harare where Zimbabwe held Algeria in check. Led 0-2 after goals from Delort and Mahrez, the Warriors were able to reverse the trend. The four changes made at the break by coach Zdravko Logarusić had a big impact, as his men largely dominated physically affected Fennecs. It was Dube, another entrant, who equalized in the 82nd minute of a pleasant match despite a more than difficult lawn. Algeria maintains its invincibility, which now stands at 22 games.

88e : we are entering the money-time and everything can still change.

85e : Algeria is struggling physically despite the changes made.

82nd: BUUUUUUUUUT FOR ZIMBABWE! Deserved equalization (2-2) in view of the good second period of the Warriors. It is signed Prince Dube, who had just come into play, after a corner kick extended again at the near post.

79e: new double change for Algeria with the entries of Abeid and Ounas in place of Bennacer and Mahrez.

76e: new big alert in the Algerian area, with a balloon lying around and too loose marking.

72nd: Bounedjah! Superb sequence of Bounedjah, who wedges a small bridge then connects a powerful strike which shaves the right post of Sumba

71st: what a miss from Musona! Mahachi overflow who crosses hard at the far post. Musona tumbles but misses his recovery when the frame was wide open!

62nd: another opportunity for the Warriors, with a superb change of wing and a cross in first intention that Kadewere sends just off!

60e : Algerian counter-attack badly ended since Benrahma forgets his partners and shoots above.

58e : Algeria is playing with fire at the start of the second period. The Fennecs are dominated in the duels.

57e: on the corner, the ball is deflected at the far post, Karuru throws himself but is too short.

56th: what action for Zimbabwe! On a touch deflected from the head, Kadewere slams a header that M’Bolhi slams for a corner.

54e : Zimbabwe is much more enterprising in the game than in the first half. Algeria are struggling to get the ball out of their own half.

50e : the newcomer Billiat shows a lot of desire. A little too much by going to fault the heart of the game on Benrahma.

47e: nice number of Benrahma on the right side. It ends with an off-target strike from Guedioura.

45e: it goes back to Harare between Zimbabwe and Algeria. Four changes on the Zimbabwean side, with the entrances of Billiat, Lunga, Mahachi and Karuru.

Not helped by a catastrophic lawn, the two teams took a long time to enter the match, but after Andy Delort’s opener, for his first goal with the Fennecs, the match was packed. Riyad Mahrez, in good shape, scored a wonderful goal. Zimbabwe, as in the first leg, did not give up and reduced the score with a splendid free kick from Musona. Everything remains open for the second period.

45 + 2e: it is repulsed by the Algerian defense, but the Warriors return to the attack. They seem to be definitely released.

45+1e : Another dangerous free kick for Zimbabwe, which gets a corner.

44e : the match was packed, with two superb goals in quick succession.

43rd: GOUUUUT FOR ZIMBABWE! It’s signed Musona, who rolled up a new free kick, full skylight! The Warriors return to 2-1.

42nd: the bar for Musona! Zimbabwe’s reaction with the overpowering free kick that lands on the bar after M’Bolhi hit it.

41e: yellow card for Benlamri for a foul on … his teammate at OL Tino Kadewere.

38th: WHAT A GOAL OF RIYAD MAHREZ! It’s a festival that the Manchester City player has just achieved: pigeon wing to take the ball, hook, feint and re-hook on the unfortunate Chicksen before shooting Sumba right foot! 2-0 for Algeria.

37e: this is Andy Delort’s first goal with the Algerian selection!

34th: GOUUUUT D ANDY DELORT! On a superb cross from Helaimia, Delort appears and sends an overpowered header under the bar. 1-0 for Algeria.

31e: a lot of technical guesswork in this meeting, and it’s not always because of the pitch.

29e: on the free kick, Mahrez finds the head of Delort. Sumba takes it.

28e : another big fault on Mahrez signed Rusike, who this time is warned by the referee. The tackle was again very severe …

20e : Mahrez takes the free kick towards the far post but no teammate manages to regain his tense cross.

18e : Mahrez is the most mobile offensive player so far. He overwhelms Chicksen, who holds his arm and collects a yellow card.

16e : the match is currently very choppy. The lawn levels the difference in technical level.

15e: corner for Algeria. Mahrez the boot back for a volley, missed, from Delort.

12e : the Warriors favor long balls, in the back of the Algerian defense, since the start of the meeting.

11e : the bounces on this lawn greatly hamper the goalkeepers.

8th: Mahrez takes care of the free kick himself at 20 meters. It passes right by the left post of Sumba.

7e: Mahrez escapes full axis and is severely tackled by Rusike. Not even a yellow card after this big tackle.

6e: Zimbabwe settles in the Algerian half of the field and puts a lot of intensity.

4e: the Warriors react, with a dangerous crossfire picked up by M’bolhi.

3rd: what action for Feghouli! The midfielder recovers a bad full-axis raise and shoots, but his shot flies away.

2e: the lawn is in a catastrophic state, it will be difficult to create ground play!

2e: nice breakthrough by Delort on the right side, which ends in a cross.

1e : the Zimbabwe Warriors finally come in with a 4-4-2 defense.

14h01 : Kassaman, adopted as the national anthem by Algeria shortly after independence, in turn resonates in the empty enclosure.

13h59: the two teams enter the very poor lawn of the National Stadium.

The two teams will soon enter the pitch

Riyad Mahrez shone during the meeting in Algeria last Thursday.

Absent in the first match between the two nations, the defender currently at OL Djamel Benlamri is back in the starting XI. There are 4 changes compared to the first confrontation (Benlamri, Guedioura, Benrahma and Delort).

The eleven of Algeria

Beaten 3-1 in Algeria four days ago, the selection led by Zdravko Logarusić intends to show a better face at home. “We have certainly given Algeria too much respect and we have to change that when we play them again in Harare”, had warned the coach of Croatian nationality. “I am very optimistic and confident for the game in Harare. You saw that when we changed the game system in the second half, it worked very well and we were catching up with them ” He therefore installed for this new meeting a scheme with two attackers.

Algeria is at the top of Group H with 3 wins in 3 matches. Zimbabwe has 4 points and is second in the group.

The program of the day

Several matches are on the program this Monday in the CAN qualifiers.

Welcome to the National Stadium

Hello everyone and welcome to Foot Mercato to follow the live commentary of the match between Zimbabwe and Algeria, counting for the 4th day of the CAN qualifiers. Kick-off is scheduled for 2 p.m. French time.

These were the details of the news Zimbabwe held Algeria in check for this day. We hope that we have succeeded by giving you the full details and information. To follow all our news, you can subscribe to the alerts system or to one of our different systems to provide you with all that is new.