FilGoal | News | Disaster in Granada after being... 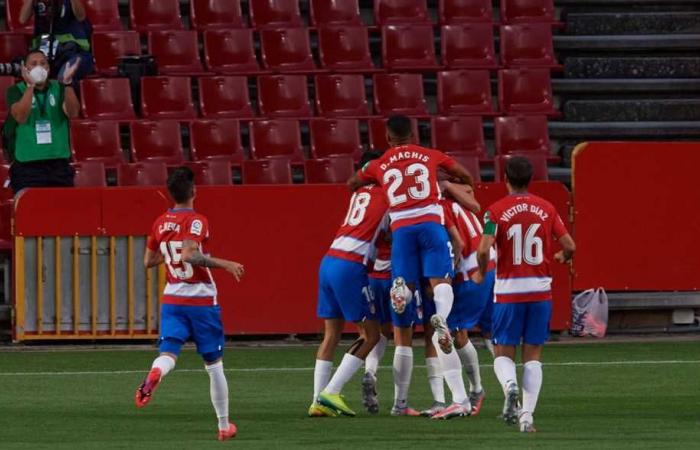 The Spanish League rejected Granadas request to postpone its match against Real Sociedad today, Sunday, in the ninth round of the competition.

Granada submitted a request to postpone the match due to the Corona virus striking its players and technical staff.

However, the request was rejected, as the competition regulations stipulate that no match should be postponed as long as the club has 7 players available from the first team to play, which is true in the case of Granada.

These seven players are: Darwin Macchis, Luis Suarez, Jan Iteki, Jorge Molina, Kennedy, Roberto Soldado, Newin Perez, and they will travel to San Sebastian to face Real Sociedad with 6 players from the reserve team, so that the team list consists of only 13 players.

The Granada crisis comes due to the infection of his player, Antonio Puertas, with the Corona virus, so the La Liga League decided not to allow every Granada mission that traveled to Cyprus to meet Omonia last Thursday in the European League, to appear against Real Sociedad due to their contact with the injured player.

Only those who are able to travel to San Sebastian in that case are those who possess antibodies to the virus, or have recovered from it earlier, and this applies only to the aforementioned Sabaean.

The Granada disaster does not stop at the players, but rather extends to the coaching staff, as Diego Martinez, the coach, and his assistant Raul Espinola, are also infected with the Corona virus.

As for the physical trainer, Victor Lafuente, who technically led the team in the Cyprus match, he is not entitled to be present in the Real Sociedad match because he was accompanying the mission, as mentioned above.

Goalkeeper coach Juan Carlos Gonzalez will thus be in charge of the team against Real Sociedad, as he did not travel to Cyprus due to a false positive sample.

Granada is fifth in the Spanish League, with 14 points from 4 wins, two draws and one defeat.

Osama Jalal reveals the position of the Al-Ahly negotiations

These were the details of the news FilGoal | News | Disaster in Granada after being... for this day. We hope that we have succeeded by giving you the full details and information. To follow all our news, you can subscribe to the alerts system or to one of our different systems to provide you with all that is new.

PREV Stalemate between Atletico and Barca hands advantage to Real Madrid
NEXT Inter coronation, Lille’s thorn and German Cup — what to watch in Europe