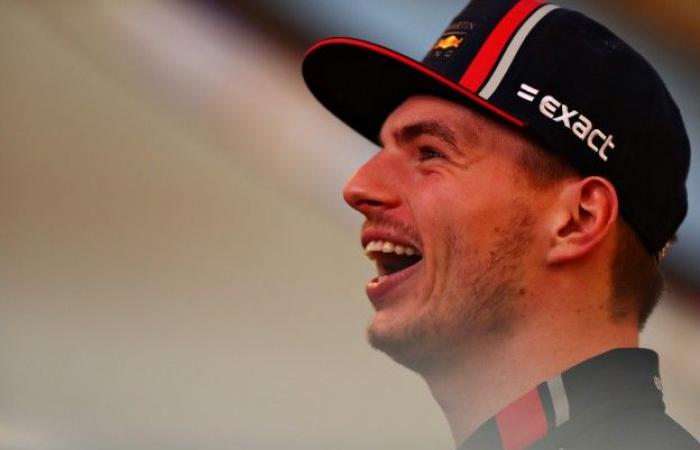 Between all the important news you can miss a few things during a Grand Prix weekend. Don’t worry, F1Maximaal keeps you informed of all the sense and nonsense from the world of Formula 1 in the ‘Meanwhile in …’ section.

A remarkable entry point for Max Verstappen and former radio DJ Edwin Evers this weekend. Will there be an interview soon?

Yuki Tsunoda has finally been allowed to make his first meters in a Formula 1 car this week. The Japanese racing talent, supported by Honda and Red Bull, was allowed to make his debut at Imola in an AlphaTauri after the Grand Prix of Emilia Romagna. The video below shows what Tsunoda has done. Will we see the 20-year-old driver back in F1 next year?

Hamilton shows a photo from the old box

Mercedes driver Lewis Hamilton shared an old-fashioned photo on Twitter. The six-time world champion shows a photo of he is six years old and holding two cups from a steerable car competition. The cups he is now winning are considerably larger.

Istanbul Park is being prepared for the arrival of F1

The Turkish Istanbul Park circuit is being prepared for the arrival of the Formula 1 circus. A lick of paint on the starting grid is already being applied for the Grand Prix of Turkey, which will be held on 15 November.

Yuki Tsunoda has thanked the AlphaTauri Formula 1 team via Twitter for its 300 kilometer test in a Formula 1 car. It was the first time that the Japanese got into a Formula 1 car and he says he is surprised by the power and braking performance. “I was able to get used to the car every lap and even ran 352 kilometers per hour!” He writes.

A striking moment at the Grand Prix of Emilia Romagna. On the on-board radio, you can hear that Ferrari has no idea that Vettel had damage to his front wing. His engineer is confident that the German had no damage to the front wing, while the driver clearly reports it on the radio.

Ricciardo spends a day in a recording studio

Daniel Ricciardo doesn’t just leave it in his spare time for motorsport-related activities. He has friends in the music industry who are more than happy to give him a chance behind the drums. The Australian takes us through his day in the recording studio, where he also takes part in the backing choir.

The marshalls on the Imola circuit were very impressed by the crash that Max Verstappen made. In fact, they were so impressed that they took selfies once the track was lifted off the track.

Today is the day for Yuki Tsunoda: the Japanese talent can make its first meters in a Formula 1 car. The Formula 2 driver, who is strongly linked to an AlphaTauri seat for 2021 instead of Daniil Kvyat, uses Imola to impress team boss Franz Tost today.

Hamilton: ‘Next time I do this, I’ll use my own shoe’

Lewis Hamilton took part in Daniel Ricciardo’s stage ritual at Imola for the first time in his career. The Australian took off his shoe and let the six-time world champion drink champagne from it. ‘I now know better than anyone how much you sweat at work. If we ever do this again, I’ll use my own shoe, ‘Hamilton reported Twitter.

Grosjean applies for a job at Mercedes

Romain Grosjean will be without a seat in 2021, so the Frenchman is looking hard for an employer. As a joke, he sends the Mercedes team a Twitter message.

Kvyat has a great reboot and passes three cars

AlphaTauri driver Daniel Kvyat paid close attention during the safety car phase of the Grand Prix of Emilia Romagna. The Russian got away perfectly at the restart and immediately overtook two cars on the straight, including Alexander Albon’s Red Bull Racing car. Moments later he also managed to pass a Ferrari.

The whole story of Hamilton’s shoey

Lewis Hamilton drank champagne from Daniel Ricciardo’s shoe after the Grand Prix of Emilia Romagna. And that while the six-time world champion indicated three years ago that there was no chance that he would be convinced to shoey to do. Formula 1 posted the whole story.

During the Grand Prix of Emilia Romagna, Max Verstappen was proposed to ride in mode eight, which might give him more chance to overtake. However, this plan was quickly overturned by the Dutchman, who said that ‘fashion eight is the worst ever’. His engineer did not need to hear more.

Verstappen on the on-board radio: ‘SEND IT!’

Max Verstappen was very happy with his overtaking action at Valtteri Bottas in Imola. The driver shouts something through the on-board radio. Unfortunately, the Dutchman retired a little later due to a blowout under his car.

Debris picked up by Bottas identified

Valtteri Bottas was unable to avoid a piece of debris on lap two of the Grand Prix of Emilia Romagna, which damaged the floor of his Mercedes. After the race, the team found out that it was part of Ferrari, but now it is also clear where it belongs: on the front wing of Sebastian Vettel’s car.

Marcus Ericsson responds to George Russell’s crash behind the safety car in Imola. Years ago, the former Formula 1 driver was blamed on the Frenchman in a similar crash by Romain Grosjean: ‘I think Ericsson hit us!’

Daniel Ricciardo expresses his delight with the on-board radio after reaching a podium in Imola. The Renault driver cannot believe he is on the podium in two races and screams: “Holy mac and cheese balls!”

Stroll rips dangerously past the marshalls at top speed

During the Grand Prix of Emilia Romagna, Lance Stroll was told that he could already overtake the safety car, a normal event in Formula 1. While the driver is catching up at high speed, there are still marshalls along the circuit: at speeds above 200 kilometers per hour, Stroll tears dangerously past it.

The crash of Verstappen on the on-board radio

Christian Horner indicated after the Grand Prix that Max Verstappen could be heard on the radio when he slid off the track. On the on-board radio you can clearly hear that the Verstappen engineer immediately realizes what is going wrong. “You slipped off.”

After the Grand Prix of Emilia Romagna it became clear why Valtteri Bottas could not keep up with Lewis Hamilton: a huge piece of Ferrari debris is removed from the car. The piece has been neatly returned to the Scuderia.

Kat breaks into a Mercedes motorhome

As the teams and drivers prepare for the Emilia Romagna Grand Prix, the Mercedes motorhome receives an unexpected visit. A cat sneaks through the building and has been spotted by Lewis Hamilton, among others, who doesn’t seem to mind.

After qualifying, the top three drivers have to pay a visit to the press conference for journalists, but the FIA ​​was equally painfully wrong. Valtteri Bottas took pole position, but the FIA ​​press chief almost appointed Lewis Hamilton as pole sitter. The press secretary in question managed to recover.

The Red Bull technicians seem to be well trained in everything. For a moment it seemed that Max Verstappen would retire in Q2 during qualifying for the Grand Prix of Emilia Romagna with an electrical problem, but the team delivered very quickly. Verstappen’s problem was solved in record time.

Lando Norris was a guest this Friday in the Formula 1 broadcast of Ziggo Sport. The McLaren driver was in a special Q&A and that resulted in some hilarious moments. For example, does Norris already have a girlfriend?

In honor of his racing hero Ayrton Senna, Pierre Gasly unveiled a special helmet design on the eve of the Grand Prix of Emilia Romagna. Apart from the Red Bull logos, the AlphaTauri driver’s head protection this weekend is almost a copy of the helmet of the Brazilian motorsport legend. Gasly is riding with the helmet this weekend, because Senna died on this track in 1994.

Russell is happy that the rumors about his future are over

Now that Williams has confirmed his two drivers for 2021, George Russell is happy the rumors are over. There was talk of a possible departure of the Brit from the team, where Sergio Perez would then take place. However, this turned out not to be the case and Williams will also play with Russell and Nicholas Latifi next year.

Lewis Hamilton has taken his dog Roscoe to the paddock again, just like in Portugal. That must of course also be shown and the Briton does that in style. The six-time world champion explores the paddock with his dog on a leash.

Mercedes makes its first appearance at the Imola circuit

The Mercedes Formula 1 team will perform for the first time at the circuit in Imola this weekend. The German racing stable as we know it today made its Formula 1 debut in 2010, while the last Grand Prix was held in Imola in 2006. The two-day Grand Prix weekend will therefore be an extra challenge for Mercedes.

Kvyat will do a lap around the track in 2020 car

Ahead of Emilia Romagna’s Grand Prix weekend, the AlphaTauri Formula 1 team is posting a video of Daniil Kvyat testing the team’s 2020 car. The Russian did this in June during a test in the AT01. In the video, the circuit can be seen from different camera angles.

First pictures from the pit lane of the circuit

Today the first photos appeared from the pit lane on the circuit in Imola. Formula 1 has entered the circuit for the first time since 2006, where Michael Schumacher won the race in his Ferrari at the time. Albert Fabrega shows on his Twitter that the teams are busy with preparations. (Photo: Mercedes AMG F1)

These were the details of the news Meanwhile in the F1 | Verstappen joins Edwin Evers for this day. We hope that we have succeeded by giving you the full details and information. To follow all our news, you can subscribe to the alerts system or to one of our different systems to provide you with all that is new.