Fear at Bayern: Kimich injured his knee and went down crying 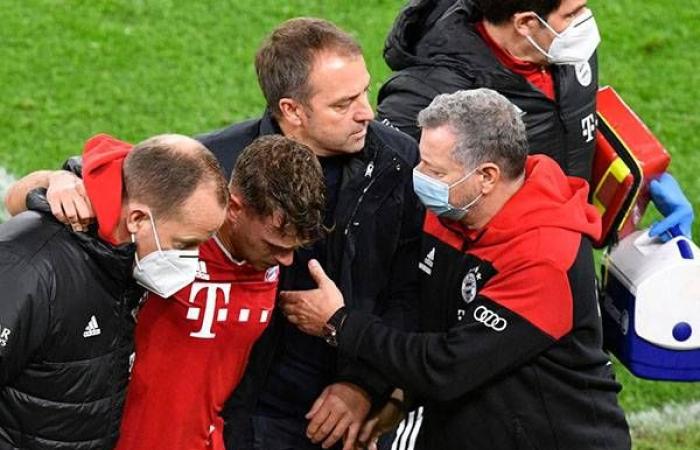 Business as usual in Germany. Bayern Munich and Borussia Dortmund reached the first classic of the season with the same amount of points. While quite a few probably hoped for a victory for the yellow-blacks, which might bring him in line further down the road, the “eternal” champion had plans of her own. It defeated the sworn rival 2: 3 away – the tenth consecutive victory in all competitions (fifth in a row in the league) – and once again took control of what was happening in the Bundesliga.

However, not everything is rosy this time in the Kingdom of Bayern. Definately not. One of the top players in the Enzy Flick puzzle, Joshua Kimich, Made his way through the middle 36 minutes into the match, after he broke through on the right and was unable to finish. The European champions’ defender / midfielder came down bitterly crying from the pitch, having to get help from the medical staff to go.

An official announcement regarding the injury has not yet been issued, but according to a report in the German “Bild”, Kimich is suffering from an injury to the lateral ligament in his knee. However, it is still unclear if this is a rupture or how long the star will have to miss. Either way, the great player has received reinforcements not just from his teammates.

“I could not see exactly what happened to him, but his reaction did not look good. I wish him only good,” he said Mats Homeless, A brake for Borussia Dortmund and ex-Bayern, adding: “He is a good guy and a wonderful football player, both for Bayern Munich and for the German national team. I keep my fingers crossed for him.”

Kimim’s injury, naturally, clouded the Bavarians’ impressive victory. Hansi Flick Of course he also referred to the unfortunate case and said: “We are not going to state anything sensational at the moment, we will deal with it professionally. However, Kimich is of course a key player for us, it will not be easy to replace him.”

And there was also a game – which supplied the goods in a big way. Five goals, 31 common threats on goal, great pace – in the best tradition of the classic. Although only one won points, both coaches seemed to come out satisfied. “It was a sensationally good game with a tremendous amount of quality and opportunities for both teams. We were more efficient and deserved to win,” Flick said.

on the other side, Lucian Fabre, As mentioned, did not come out too depressed from the loss to the great rival. “It was a good game. Good for viewers … well, at least for those who watched at home on TV. We had a lot of good opportunities but we didn’t take advantage of them. The draw was fairer but we will stay positive,” the Dortmund coach concluded.

These were the details of the news Fear at Bayern: Kimich injured his knee and went down crying for this day. We hope that we have succeeded by giving you the full details and information. To follow all our news, you can subscribe to the alerts system or to one of our different systems to provide you with all that is new.