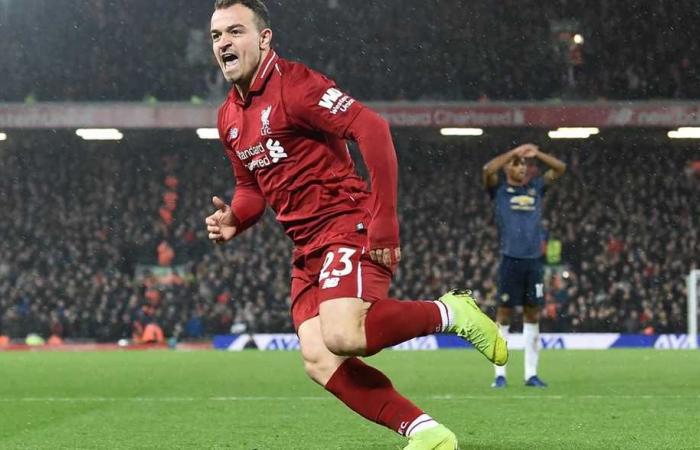 Gerdan Shaqiri, the Liverpool midfielder, knows that the late victories that his team has achieved a lot in the recent period are due to the belief in the possibility of winning until the final whistle.

Liverpool reversed their deficit against West Ham to a 2-1 win at AnfieldShaqiri made the goal to win the Reds.

Shaqiri said in statements to his club’s website: “It was a difficult match. We knew that West Ham would come to Anfield with high spirits and great confidence after the good results they had achieved against the big teams in previous matches.”

He added, “We saw that already in the first minutes, and were able to score first, but our attempts to return in the score did not stop and we succeeded in imposing our style of play until the end.”

For the second week in a row, Liverpool had to come back from trailing with a goal to win 2-1 in the end, having repeated the same against Sheffield United at Anfield on Saturday.

The Swiss said, “You have to believe in your fortunes until the final whistle, and we were able to score a nice second goal, so we are very happy with this important victory.”

Shaqiri entered as a substitute with Diogo Jota 20 minutes before the end of the match, and managed to create the winning goal for his Portuguese colleague in a wonderful way.

“The substitutes always want to change the outcome of the match after they enter,” he stressed. “Diogo and I can contribute to that, so it was great to be part of the winning goal. It was a beautiful and very important goal.”

The West Ham match is the fourth for the former Basel and Stoke City player this season and his first in the Premier League since last July.

“I have always been happy to participate in matches. I suffered many injuries and went through difficult times, and I am happy to play now. I made a great effort to maintain my physical fitness and I hope that it continues as well.”

These were the details of the news FilGoal | News | Shaqiri: Liverpool’s late wins? ... for this day. We hope that we have succeeded by giving you the full details and information. To follow all our news, you can subscribe to the alerts system or to one of our different systems to provide you with all that is new.