Emelec scores a point in a controversial match against Aucas |... 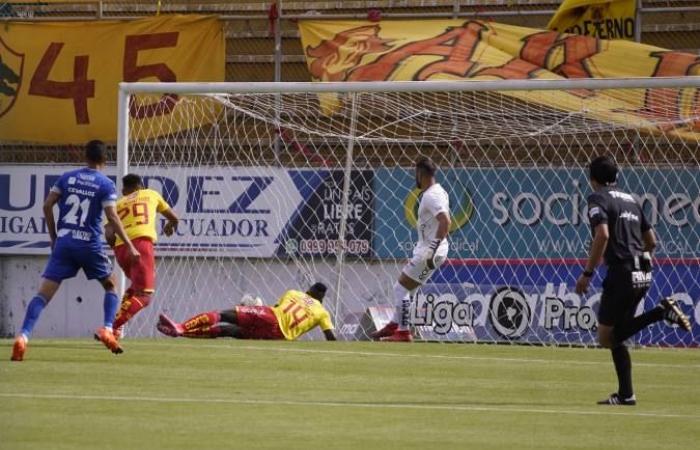 Emelec drew 1-1 on Sunday at the Aucas stadium in a match where the millionaire could not maintain the advantage he had achieved in the first minutes because he had to play 60 minutes with one less player due to the expulsion of Marlon Mejía. Ismael Rescalvo’s team added five points and is in tenth place. Victory is elusive from the first date of the second stage.

Before the game went into normal processing, with two teams studying to find the spaces to attack, Emelec found a clubhouse goal. Romario Caicedo made a throw-in that found ‘Tuka’ Ordóñez with room to win in the heads-up against Manchot and define before the exit of Frascarelli, who saved the shot, but Cevallos took advantage of the rebound to inflate the nets (6m ).

Aucas took the post and had approaches to the millionaire bow, although without any effect due to the shallow depth or the good response of goalkeeper Ortiz. Emelec would suffer the unfair expulsion of Marlon Mejía after a foul on Cuero, who sought contact with the electric defender’s arm (30m). Rescalvo was forced to remove the author of the goal to compensate for the expulsion with the entry of Quintero.

Aucas squandered two clear chances to equalize the game at the feet of Alzugaray and Figueroa, both of whom sent their shot to the top of the stadium. Before the break Ortiz cut a clear opportunity to Barreiro.

The second half Aucas started it overturned to attack and with the lines ahead to try to take advantage of the man more and equal the score. Despite being with one less man, Emelec resigned from the lower block and waited for Aucas on ¾ of the court, being vulnerable on certain occasions to the Auque footballers who exploited the spaces. And that was used by the locals to tie the game. Barreiro went hand in hand with Ortiz and before his failure, Alzugaray was attentive to put the equalizer (58m). Emelec resisted with what was within his reach while Aucas came over him in search of victory, making a figure of Ortiz, who responded when demanded. In the discount, Palacios missed what could be the winning goal for Tempesta’s team.

Finally, the attempts of the local team to win the victory were not effective when they found a wall in the arch and a firm back that only failed in the tie. (D)

*The article has been translated based on the content of Source link by https://www.eluniverso.com/deportes/2020/10/31/nota/8033929/vivo-aucas-vs-emelec-ecuador-liga-pro-2020
. If there is any problem regarding the content, copyright, please leave a report below the article. We will try to process as quickly as possible to protect the rights of the author. Thank you very much!

These were the details of the news Emelec scores a point in a controversial match against Aucas |... for this day. We hope that we have succeeded by giving you the full details and information. To follow all our news, you can subscribe to the alerts system or to one of our different systems to provide you with all that is new.