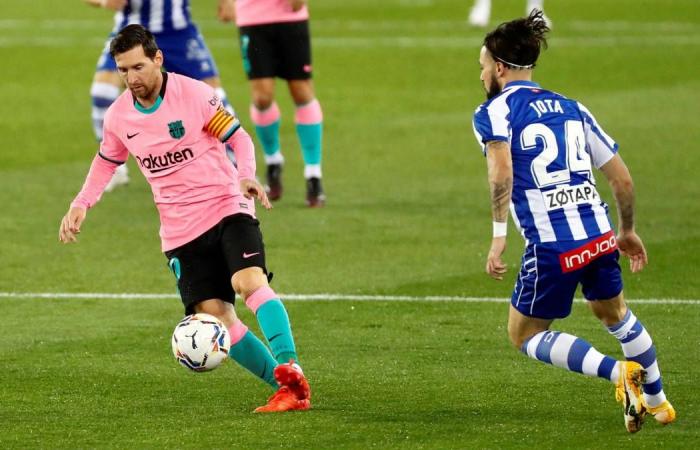 FC Barcelona could not afford a new stumble in the League, especially after the defeats against Getafe and Real Madrid. In addition, we must add the draw against Sevilla before the break for international commitments of teams. The culés faced the visit to Vitoria with confidence having surpassed Juventus of Turin in the Champions League, while the Deportivo Alavés took oxygen in the First Division at the expense of Real Valladolid.

Pablo Machín surprised at the beginning by leaving Lucas Pérez and Joselu Mato on the bench, the duo that gave so many joys to the babazorra squad last season. A duel that, in addition, Ansu Fati wanted to celebrate in style when he reached his majority this Saturday, October 31, of a really fateful and fateful 2020 due to the coronavirus crisis.

Lionel Messi, Antoine Griezmann and Ansu would try to surprise the vitorianos, the three being accompanied in attack by an Ousmane Dembélé who saw goal in Turin with some fortune. The reply for Alavés would arrive almost immediately, although it is true that Gerard Piqué was very attentive to remove the danger from Neto’s dominions.

The best opportunity (until that precise moment) would be in Ansu Fati in his boots, after a long and space displacement of a Clément Lenglet who would end up limping moments later due to a collision with Deyverson Silva. With regard to Ansu’s action, he could not resolve in hand-to-hand with Fernando Pacheco for crossing the shot too much.

Neto would react wonderfully to the attacks of Edgar Méndez and Deyverson, while Messi continued to lack that spark that has accompanied him throughout his sporting career. Griezmann and Fati would carry out an exquisite combinationAlthough the definition of the former Real Sociedad or Atlético de Madrid would leave a lot to be desired.

Dembélé, who had made a great incursion, would not be able to connect with Ansu Fati. For his part, Florian Lejeune would avoid Leo’s goal from a direct free kick by clearing the leather under the sticks. Then, the most decisive action of the opening 45 minutes would take place, the precise moment in which A clamorous lack of understanding between Neto and Piqué would lead to Luis Rioja’s goal (1 – 0).

The culés would claim a maximum penalty for infringement of Ximo Navarro, who would leave the field before the break due to physical problems. Facing the second half, Ronald Koeman, Barça manager, would give entry to Francisco Trincao, Pedri González and Miralem Pjanic to the detriment of Dembélé, Lenglet (De Jong would pass to the center of the rear) and Busquets, respectively.

Messi would try with a new hit, but Pacheco’s response would be fantastic. Little by little, the Catalans would corner their adversary with a real harassment and demolition. After Sergi Roberto’s center, Ansu’s shot would go away licking the stick of the Alavés goal. Machín would bet on Joselu and Tomás Tavares to take the place of Deyverson and Méndez, respectively.

The total reaction of Barça would come, in the first place, with the expulsion of Jota Peleteiro by double yellow card. On the next play, Griezmann would finally retaliate in front of goal by converting the tying goal (1 – 1). Likewise, Pachecho would prevent the instant comeback of the Blaugrana club with an intervention of many carats.

For his part, Koeman would trust Sergiño Dest to replace Jordi Alba, while a couple of approaches from Alavés would be perfectly solved by Neto, but one of them with a slight scare. Pedri was liking himself in Mendizorroza, to which it should be added that the braid would invalidate a Griezmann target for offside by Trincao.

In his last participation in the commitment, as he would be replaced by Martin Braithwaite, Ansu would not be able to win the game against Pacheco, who would also make a highly worthwhile double stop to Dest and Pjanic. Finally, it would be confirmed andl distribution of points between Deportivo Alavés and FC Barcelona. The culés have only obtained two of the last 12 points to which they have aspired in the League.

These were the details of the news Fernando Pacheco stops FC Barcelona for this day. We hope that we have succeeded by giving you the full details and information. To follow all our news, you can subscribe to the alerts system or to one of our different systems to provide you with all that is new.