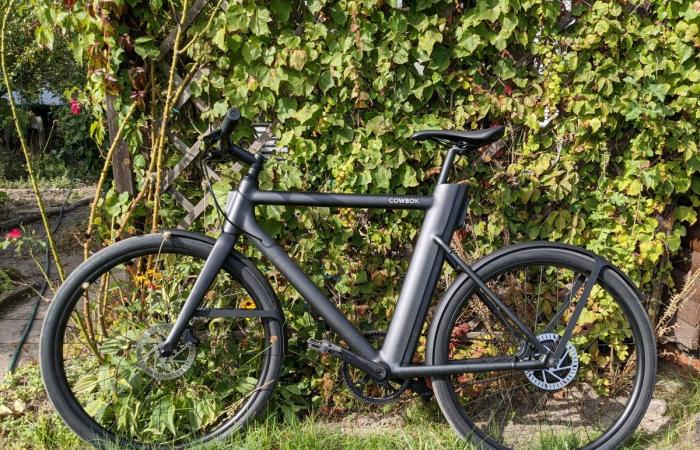 
We were able to ride the third generation of Cowboy’s Belgian e-bike for a few weeks. How the sporty pedelec rides and how it differs from Vanmoof’s S3 is revealed by the user test.

Cowboy’s third generation of pedelecs was introduced in June 2020, just a few months after Vanmoof’s S3 (test). Similar to the new Vanmoof model, it does not differ significantly from its predecessors, but has been given a few new functions – and it has become a little more expensive than its predecessor. For a pedelec, however, it is still comparatively affordable with its price of almost 2,300 euros. The Cowboy can be described as a puristic pedelec with a smartphone connection, in which the focus is on driving fun.

The Cowboy 3 comes to your home

Similar to Vanmoof, Cowboy relies on direct sales: This means that the manufacturer only sells its bikes online – there are no retail stores, of which Vanmoof has opened a handful in major cities around the world. Customers receive their ordered bike delivered to their home by a forwarding agent. Our test bike also reached us this way. The Pedelec is delivered in a large box and is almost completely assembled. Only little things have to be done by the owner himself.

“I’m a Cowboy”: The Cowboy 3 will be delivered to your home by a forwarding agency. (Photo: t3n)

Once the bike has been assembled, which shouldn’t take more than ten to 15 minutes, all you have to do is install the smartphone app and create a user account – then you can start.

Cowboy 3: Similar target group, but sportier than a Vanmoof

With the Cowboy 3, the Brussels-based startup primarily wants to appeal to commuters and pedelec fans in cities – it is designed as a city bike. However, its geometry is sportier than that of Vanmoof’s S3. Due to its straight handlebars, the hard construction and the position of the saddle, you sit more stretched on the cowboy, which should not necessarily be for everyone. I like the seating position a little better than with the more comfortable Vanmoof, because I usually ride a more sporty bike. 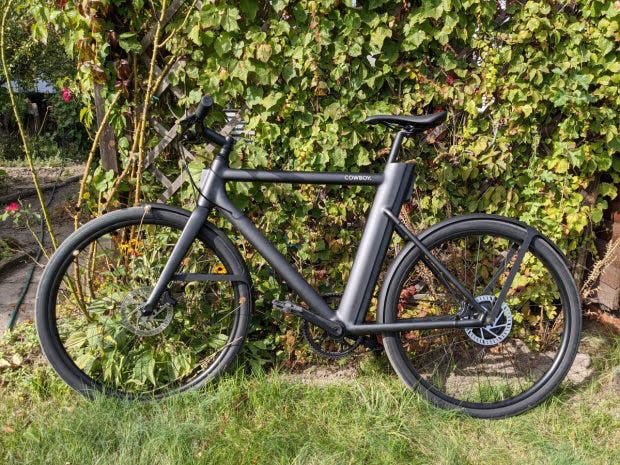 The rather sporty character of the Cowboy 3 continues with the tires. They are not particularly thin, but because they have no profile, they offer little rolling resistance and are almost noiseless. The manufacturer relies on puncture-proof tires so that the bike does not get flat despite the treadless tires. The Cowboy is absolutely quiet while driving – the motor integrated in the rear wheel hub cannot be heard either. The lack of a stand also testifies to its sporting character – the manufacturer currently does not even offer an official retrofit option.

The reason for the lack of accessories – apart from the mudguards, which cost 90 euros when ordering – was instead concentrated on developing the software and the bike itself. 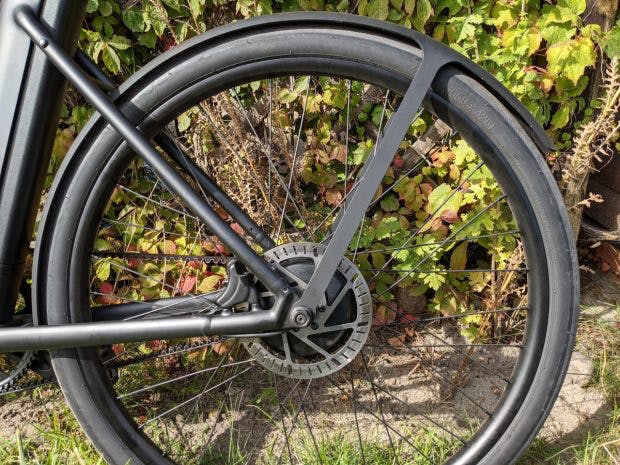 The mudguards of the Cowboy 3 cost 90 euros, but make something. (Photo: t3n)

After all: the bike can be expanded with standard accessories from third-party manufacturers to include components such as stands, luggage racks and more. Recommended accessories are listed on the third-party website, Cowboy Tools. But we can soon be prepared for further original accessories: The company is working on its own product developments such as accessories that “match the aesthetics of our cowboy bikes,” explains the company.

The Cowboy Bike is visually even more reduced than Vanmoof’s S3, despite the smart functions that we will go into later. While a matrix display with 166 LEDs and a loudspeaker are integrated in the Vanmoof, the electric horse from Brussels comes with a small LED display to show the battery level. It can only be recognized as a pedelec by the battery attached along the seat post, which, unlike the Vanmoof, can be removed and charged in the apartment on the fourth floor. It is secured to the bike with a lock, which means that it cannot be stolen so quickly. 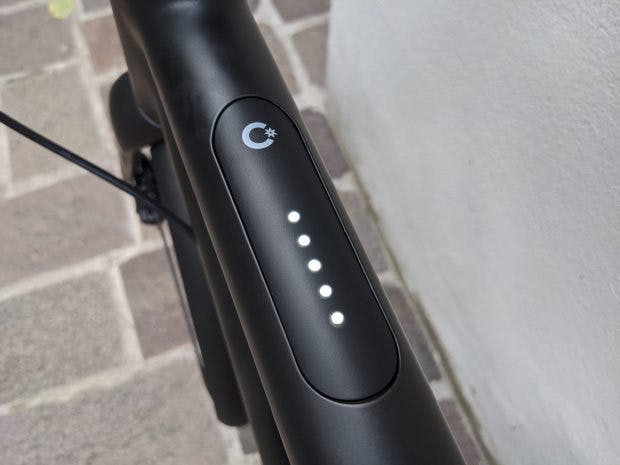 On the top tube of the Cowboy 3 is an LED bar that shows the battery level. (Photo: t3n)

The battery has a nominal output of 360 watt hours and weighs 2.4 kilograms. With regard to the range, depending on the driving style, around 70 kilometers are possible, as the manufacturer says. That coincides with our experience. If it is empty, it can be charged in around 3.5 hours using the charger included in the scope of delivery.

The total weight of the Cowboy 3 including the battery is 16.9 kilograms, making it two kilograms lighter than the Vanmoof S3, but heavier than the second generation of the Cowboy bike, which weighed 900 grams less. The plus in weight is due to the new tires with puncture protection. It is not as light as a minimalist pedelec from Ampler or Gogoro, but it is far lighter than most electrified bicycles with their not very filigree designs, which some also call tractors with two wheels.

How does the Cowboy 3 drive? 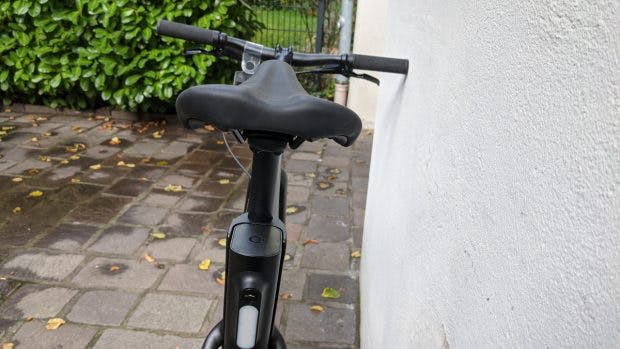 The electric drive of the Cowboy 3 is implemented by a 250 watt motor with 30 Newton meters, which is part of the rear wheel hub. Instead of a classic chain, a belt from Gates is used, which requires less maintenance, does not need to be oiled and does not leave any grease stains on the trousers. With a promised mileage of 30,000 kilometers, it should last a few years.

Cowboy has again dispensed with gears, but instead has reduced the gear ratio to 63/22 (2.86) in order to make it easier, among other things, to start off and climb inclines. The special thing about the Cowboy is the driving behavior, because the manufacturer has optimized the electrical support so that you do not notice the engine while driving – regardless of the speed. In addition, the engine is completely quiet in every situation – Cowboy succeeds in the trick of fooling the driver into thinking he is driving on his own. 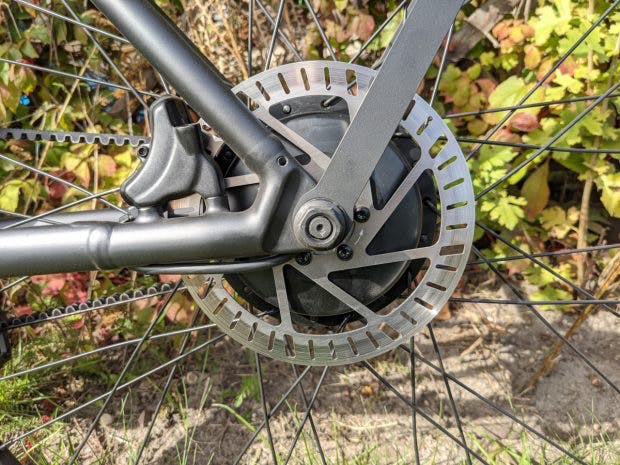 The well-gripping disc brakes of the Cowboy 3 come from Tektro. (Photo: t3n)

As far as the area of ​​application is concerned, the Cowboy with its single-speed drive is designed more for flat land – as soon as you want to climb an incline, more effort is required of the driver. Here the Vanmmoof S3 is stronger with its boost button. Even at the traffic lights, the Vanmoof with its boost function should easily whiz past the cowboy. Nevertheless, the acceleration with electrical support up to 25 kilometers per hour succeeds in no time at all, which you would like to surpass with muscle power, which is also possible due to its sleek character – you just have to pedal a little harder.

The driving experience of the Cowboy 3 can primarily be described as sporty and direct due to its lack of suspension, the straight handlebars and hard-inflated tires. Due to their width, the tires convey a safe driving experience. The electric bike rides on asphalt and paved bike paths like Schmitz’s famous cat. The Cowboy 3 can be used on unpaved roads, but it still feels most comfortable on firm ground. If you drive into a cobblestone side street, as is often the case in Berlin, you lose a bit of fun because you feel every single bump due to the non-existent suspension fork and rather hard handlebar grips. This is no different with the Vanmoof S3. For a little comfort, it is not advisable to inflate the tires to their full five bar – but they shouldn’t be too soft either. 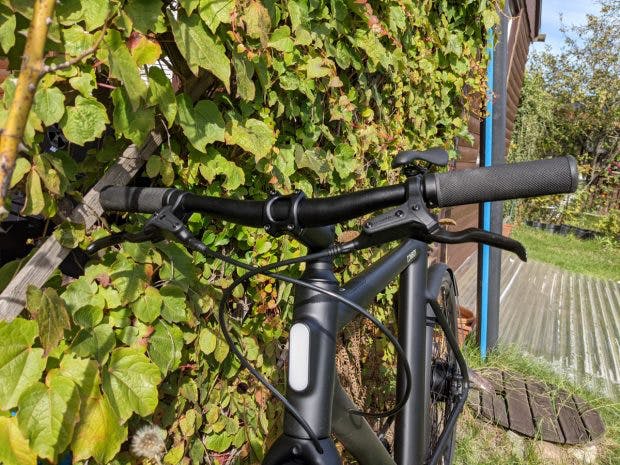 Cowboy 3 from the front – the handlebars are hard and easy to grip without any ergonomics. After a long journey, our hands tingled. We recommend replacing the grips or adding additional bar ends. (Photo: t3n)

We also noticed the hydraulic disc brakes from Tektro, which are attached to the front and rear wheels; they provide excellent braking performance. The front light integrated into the frame could meanwhile shine a little brighter on the road in front of the bike: In order to be recognized by other road users, it is sufficient to orientate oneself on poorly illuminated paths, the spotlight is not necessary. But Cowboy also seems to be aware of this, which is why the battery lights are included.

*The article has been translated based on the content of Source link by https://t3n.de/news/cowboy-3-test-pedelec-e-bike-1332004/
. If there is any problem regarding the content, copyright, please leave a report below the article. We will try to process as quickly as possible to protect the rights of the author. Thank you very much!

These were the details of the news Cowboy Bike 3 in the test: Puristic pedelec with smartphone connection for this day. We hope that we have succeeded by giving you the full details and information. To follow all our news, you can subscribe to the alerts system or to one of our different systems to provide you with all that is new.