Jordanian security reveals why the best athlete in the country’s history... 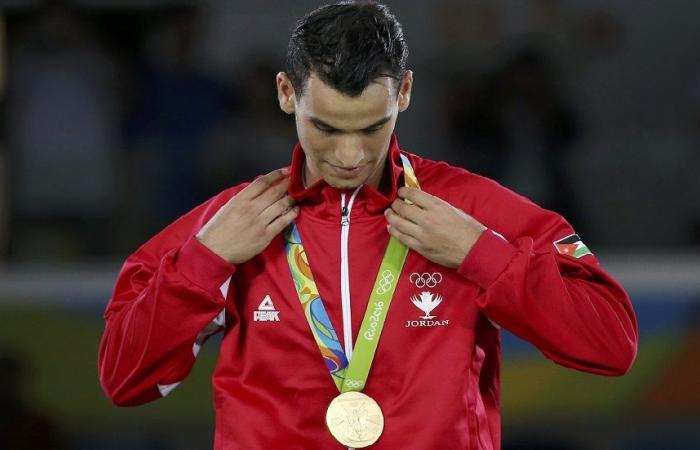 The Olympic champion, the Jordanian Taekwondo star, Ahmed Abu Ghosh, announced, on Friday, his international retirement at the age of 24, surprisingly, without addressing the reasons that led him to make this decision.

Abu Ghosh published his retirement decision on his Facebook page, saying: “Olympic champion Ahmed Abu Ghosh, the first and only Olympic medalist in the history of the Hashemite Kingdom of Jordan, announces his retirement from participating and representing the national team in international forums.”

A few hours after this news, which surprised the Jordanian sports community, the local public security issued an urgent statement in which it said: “The player Abu Ghosh is arrested on the background of a criminal case that has nothing to do with any sporting or Olympic matter.”

The statement added: “The media spokesperson for the Public Security Directorate confirmed that the player Ahmed Abu Ghosh was arrested in a correction and rehabilitation center, against the background of a criminal case pending before the judiciary, after which he was arrested, and it is currently in the hands of the judiciary to decide.”

The statement did not clarify the nature and details of this criminal case in which Abu Ghosh is accused.

The statement emphasized that “everything that is rumored about Abu Ghosh’s arrest for sports or Olympic reasons is incorrect and has nothing to do with the truth.”

And Ahmed Abu Ghosh, is the highest Jordanian athletic achievement, by winning the gold medal in Taekwondo for 68 kg at the Rio de Janeiro Olympics 2016.

His name was etched in gold letters, when he ousted Russian Alexei Denisenko in the final match, 10-6, to become the first Jordanian to record this achievement since the start of his country’s participation in the Moscow Olympics in 1980.

Abu Ghosh was preparing to compete in the qualifiers to participate in the Tokyo Olympics 2020, before it was postponed for the summer of next year, due to the outbreak of the new Corona virus in the world.

These were the details of the news Jordanian security reveals why the best athlete in the country’s history... for this day. We hope that we have succeeded by giving you the full details and information. To follow all our news, you can subscribe to the alerts system or to one of our different systems to provide you with all that is new.