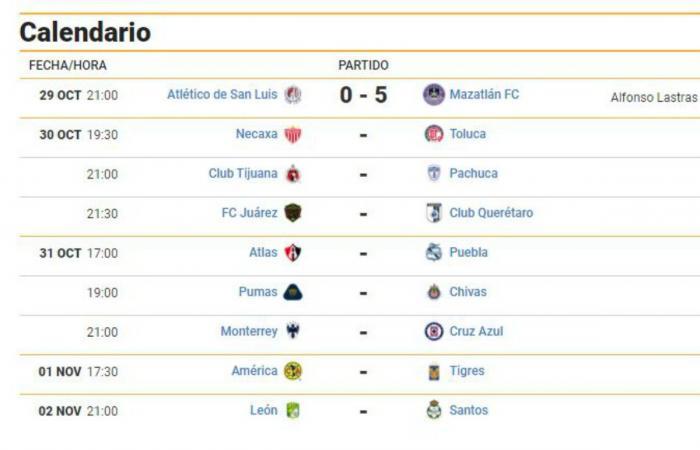 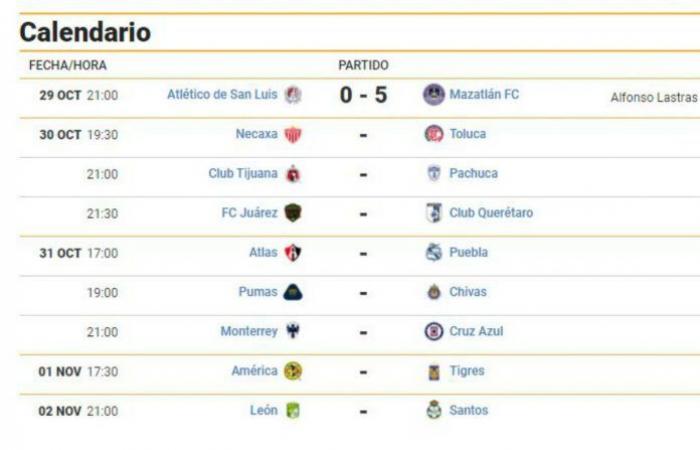 
The Matchday 16 of Guard1anes 2020 Liga MX began with the match between Atlético de San Luis against Mazatlán, a duel that ended with the victory of the squad led by Tomás Boy. Now the actions will continue this Friday, October 30 with a triple billboard, where all participants seek to establish themselves in the Repechage positions.

The arrival of José Guadalupe Cruz ended up notably benefiting Necaxa, who will host Toluca with the aim of achieving the victory that confirms their attendance in the prelude to the Liguilla. Later, xolos de Tijuana will do the honors to Pachuca, while FC Juárez will do the same with Querétaro, which removed Alex Diego from the bench to give it to Pity Altamirano.

For the billboard on Saturday, October 31, Atlas will face Puebla, in order to leave the way for the most attractive clashes of the weekend, since Pumas will try to confirm your go to the big party in the clash against Chivas, while Cruz Azul will seek the same goal against Los Rayados.

On Sunday, November 1 there will only be one commitment, although it promises to be full of emotions because America and Tigres will face each other, where the winner will stay in the direct qualification places. For the close of the penultimate date of the regular phase, the only confirmed and undisputed leader, León will do the honors to Santos Laguna.

Transmission of matchday 16 of Liga MX:

*The article has been translated based on the content of Source link by https://www.mediotiempo.com/futbol/liga-mx/fechas-horarios-jornada-16-guardianes-2020-liga-mx
. If there is any problem regarding the content, copyright, please leave a report below the article. We will try to process as quickly as possible to protect the rights of the author. Thank you very much!

These were the details of the news Dates and times of matchday 16 of Liga MX Guard1anes 2020 for this day. We hope that we have succeeded by giving you the full details and information. To follow all our news, you can subscribe to the alerts system or to one of our different systems to provide you with all that is new.